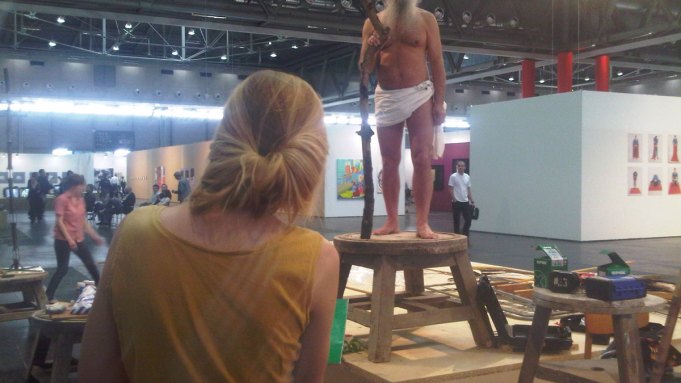 This year’s edition of VIENNAFAIR [May 12–15], the seventh, got off to a slow start, with dealers banking on weekend sales. “It’s not Basel or London,” said Markus Rischgasser, director of first-time participant Galerie Eva Presenhuber, when A.i.A. asked about first-day sales.

A handful of recent, large-scale Doug Aitken photographs, offered at $40,000 a pop, lined the booth of the Swiss gallery, which was one of the few well-known Western European galleries present. No Dutch gallery turned up, possibly due to the scheduling overlap with the largely national Art Amsterdam. France was represented only by Chez Valentin from Paris. They were the only French gallery to return from among last year’s seven, and they are on the selection committee. Representing Belgium was Antwerp’s Micheline Szwajcer, who shared a booth with Berlin’s Barbara Thumm and Vienna’s Ursula Krinzinger.

With an unprecedented 45 galleries from Eastern Europe and 50 from Austria the agenda of the fair quickly became clear: to sell Eastern European art to Austrian collectors and, perhaps to a lesser extent, vice versa. On opening night, it was mostly the Austrian collectors who came, but with free-flowing Champagne at the demarcated booth of Lower Austria Contemporary, an umbrella group of various Austrian art institutions, most VIPs ended up tottering drunkenly down the aisles, keeping their checkbooks in their pockets.

Juraj Ä?arný, a six-time participant, opted not to return with his Bratislava gallery S.P.A.C.E. this year. He told A.i.A. that “East European galleries are too experimental for the local buyers, who prefer to buy locally,” critically adding, “I don’t see what the fair is doing to attract international collectors, because there are not many of those.”

Collector and Polish art specialist Piotr Bazylko added, “two of the best Polish galleries are not even here – Raster and Foksal.” However, the fair’s freshly appointed artistic director, Georg Schöllhammer, countered that “Raster have already signed on for 2012” and “Foksal are present with Pawel Althamer.” The latter artist collaborated with a group of students from the art academies of Bratislava, Warsaw and Vienna in a performance in which they created drawings and sculptures inspired by the live model Pinky, a legend in the Polish art scene, with the rubbish taken from the fair’s trash bins. The performance brought the art-making process inside the fair.

Althamer told A.i.A. that the performance “shows the production line of an art work to the students, asking the question, ‘Am I ready to jump into this world?'” The work is a preview of one commissioned by the Deutsche Guggenheim, which will be on view in Berlin in the fall. After hours on opening night, the place to be was the backyard of the Academy of Fine Arts Vienna, where Althamer treated selected guests to homemade risotto and a midnight ride at the world famous Prater amusement park.

Although most international collectors stayed away from the fair, Berlin-based Ivo Wessel attended and complimented the architecture, “which, with its wide aisles invites the flâneur.” International curators included Adam Szymczyk, chief curator at Kunsthalle Basel and Kathrin Rhomberg, curator of last year’s Berlin Biennial, both in town for this year’s “curated by,” a series of exhibitions hosting international galleries that opened on the second day of the fair at 21 of the city’s top galleries. The curated gallery exhibitions focused on works by Eastern European artists and included a stunning solo exhibition curated by Witte de With’s Nicolaus Schafhausen at Galerie Meyer Kainer of new works by Georgian artist Thea Djordjadze who is not even on the gallery’s roster.

VIENNAFAIR saw success in imitators: for the first time this year a rival fair, “Fruits, Flowers, and Clouds.” The quality of their 20 participants far outpaced that of the “mother fair,” with Galerie Neu showing Andreas Slominski, Johann König showing Annette Kelm and Galerie Kamm showing Lorna Macintyre. Organized and curated by the Austrian art magazine Spike, the fair selects a list of artists and invites their main galleries to present a small solo show of works. “With only one exception, all invited galleries participated,” fair director Maximilian Geymüller told A.i.A. With a participation fee of only 1,000 Euro, this is hardly surprising. Some galleries were present at both fairs. In fact, compared to Berlin, the solidarity of the art scene in Vienna is exemplary. A tagline spraypainted on an unused storefront on the gallery-heavy street Schleifmühlgasse read: “It’s teamwork, baby.”