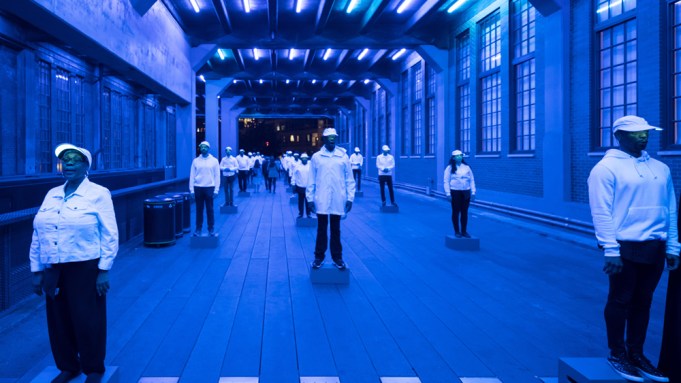 What exactly was The Mile-Long Opera: a biography of 7 o’clock? Was it an extravagant free public artwork, mounted in a city park as a gift to the people? (Yes.) Or was it a very expensive billboard, a glowing arrow pointing at a big new real-estate development? (Maybe.) The event ran for less than a week, but you can watch 360-degree documentary videos (sponsored by Target) on its website and make your own guess. As you scroll along, the way you define it may change as your attention settles on certain details.

The bare outline: The Mile-Long Opera is a civic chorale with music by composer David Lang and a libretto by poets Anne Carson and Claudia Rankine. From October 3 to 8, it was performed nightly by one thousand singers along New York’s thirty-block-long High Line park. There were many things to treasure here: the High Line, a defunct elevated train track furnished with plants and benches, delighted the senses as usual; the team was full of incredible artists; and the cooperating choirs (which included the Park Slope Singers, Vy Higginsen’s Sing Harlem Choir, and the Haiyun Chorus) truly represented the city’s diversity. What a present to the public! What a throwback to last century’s Percy MacKaye-style pageantry and idealism! But as with so many free things (gift horses, lunches, Facebook), a shadow of doubt crept in.

Architecture firm Diller Scofidio + Renfro is credited as The Mile-Long Opera’s co-creator (with Lang) and co-producer (with the High Line). DS+R worked on the High Line and parts of the Hudson Yards development at the park’s north end.  The Shed, a behemoth culture venue they designed, opens in Hudson Yards in spring 2019. Is it just chance that the Shed’s sail-like front luffs in the background as viewers near the opera’s end? Certainly, it’s a boon that one of the architecture firms defining our city’s public spaces has an interest in performance. But now that nearly ten years have passed since the first section of the High Line opened, we can see how all that public investment helped create a new neighborhood that’s effectively only available to the megawealthy. The same is happening around 30th Street. The city these capital-intensive projects shape has begun to function more like a theme-park version of New York than a place where regular people live and work. The plebs are sometimes allowed in to play among the pharaohs’ pyramids, but when night comes, the gates swing shut.

That disconnect tore at The Mile-Long Opera. The project’s mission was populist: the libretto was inspired by interviews with average New Yorkers; various of the opera’s associated public programs emphasized interborough involvement and communality. Yet reminders of ownership and resource allocation kept swamping the project’s good intentions. For instance, to add visual interest, the opera’s director Elizabeth Diller (a principal at DS+R) put dancers inside the buildings that hug the park, so your eyes were drawn to the millionaires’ apartments around you. Lit with a neon-white glare, the actors were choreographed to just . . . clean windows. Throughout the park, Diller did a lot of clever things with light and scale and the “accidental scenery” around the perimeter. But the optics of her choreography were terrible: all those artists were literally polishing the product.

As performance, The Mile-Long Opera was simple but overextended—exquisite at first but eventually, if you walked its entire length, tiresome. Singers, mostly wearing baseball caps with light-up visors, lined the park’s roughly 1.5-mile stretch, singing or speaking a section of the Carson/Rankine libretto. (Carson’s words were usually sung, Rankine’s spoken.) The texts included personal memories of evening, reflections on how the city has changed, and kaleidoscopic meditations on the gloaming. Since you were walking past performers, you only ever heard evocative snatches of text: “Between us there is my dining table” and “Parts of us erase” and “All I have is coffee.” If you read the libretto later, you might realize what ravishing stuff you had missed as you were being ushered along (signs on the route urged: “Keep moving forward”). The experience, though, was meant to be fragmented. Musically, too, everything was disconnected and deconstructed. It was like dialing past one thousand radio stations as they all played the same tune.

At the wider sections of the park, like the tunnel through the old Nabisco building at 15th Street, the long chain of serial soloists turned back into a choir. Singers stood on boxes arranged in grids, like statues in a gallery. Their voices joined; their sequences echoed against the concrete around them; we heard chords at last. In some sections, the tension of waiting for and then finally finding harmony made The Mile-Long Opera into a suspenseful sonic thriller. Lang’s work has ambition and frequent beauty. It benefits from his confident way of accepting the city’s ambient noise rather than resisting it. And he can write for anybody. The cast included everyone from major operatic talents (I was two feet from mezzo-soprano Hai-Ting Chinn!) to people with . . . enthusiasm. Yet everyone sounded as they should.

But the duration worked against them. The piece had to be as long as a walk through the park, and its pleasures couldn’t survive the slog. The High Line, which was supposed to be a kind of collaborator in the work, fought against it. That impression might be stained by the stress of the experience. If I saunter slowly for more than an hour while absorbed in artistic contemplation, my lower back starts to go. On the High Line, my body started screaming around 22nd Street—which was also when I saw a few tony attendees leaving the show, heading down the access staircases, escaping to a normal walking pace.

The Mile-Long Opera may have been an endurance test for the audience, but the singers were really put through hell. It’s hard to imagine repeatedly singing a short phrase for more than two hours while perched on a bench or a box. At the beginning of the walk, there was a brilliant intensity to standing right next to someone as they sang about dusk falling (“Astronomers, focus your telescopes!”) as it actually fell. There was a lady in a sweater with hearts on it who could have been calling twilight down out of the sky. But the deeper you went into the park, the more the scale warped the work’s vivid sense of connection. The singers seemed to be in greater discomfort, yet they got easier to ignore. This was a key reason the opera was a rather depressing experience. The chorus members may have been full of fellow feeling and delight. Yet wandering through the choir (some wore lively happy smiles, others had desperate eyes), I felt like a Roman emperor ambling through my gardens. It was as though an attentive majordomo had arranged the palace servants for my amusement—as human torchieres, human music boxes, human sculptures. It was luxe and grim at once, the kind of fun that went out with Tiberius.

The High Line makes a sharp left as you approach the Hudson Yards development. In this section, the singers stood on cantilevered spotlight rigs, singing into bulbs that stared back at them from metal arms. Here the High Line tapers into a pedestrian bridge over two city blocks worth of huffing, stinking, asthmatic trains, then glides slowly back down to street level on 34th Street. The park’s designers wanted make our transition from manicured infrastructure to the urban streetscape as graceful as possible, but you can’t help but think about the terrifying priorities that change represents. At street level, everything is filthy. There’s no public-private partnership down here to keep the place tidy. This is the real New York: asphalt, halal carts, cops on the corner, the Megabus lines of people hoping to get to Boston or Baltimore.

That was free, too.