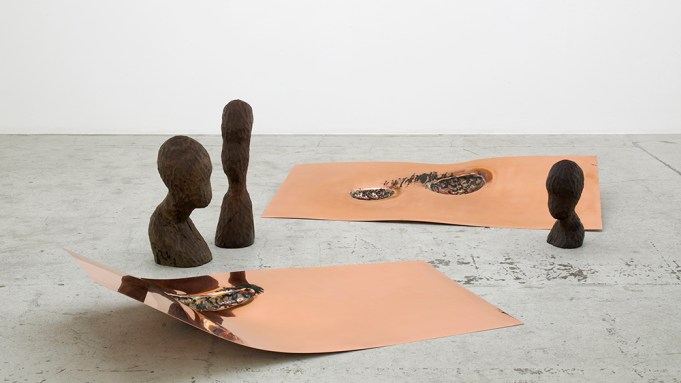 On Wednesday at 12:00 p.m. sharp, Jenny Jaskey met me at New York’s blustery Pier 94 for the Armory Show preview. Jaskey, the director and curator of The Artist’s Institute—a Hunter College-affiliated nonprofit that mounts six-month exhibitions dedicated to the work of a single artist—had a full day ahead. It was mere hours before the Institute opened the doors of its new headquarters, a 1,500-square-foot townhouse on the Upper East Side. (Previously, it had been located in a basement-level space one-third that size on Eldridge Street downtown.) Since its founding in 2010, The Artist’s Institute has produced 10 seasons honoring artists such as Jimmie Durham, Lucy McKenzie and Pierre Huyghe. In collaboration with Jaskey and her team, the artists conceive their seasons as a mix of exhibitions and auxiliary programming.

The space launches its new chapter with a season on the work of Hilton Als (through Aug. 7). Known as a writer, Als also creates art and curatorial projects. For the first part of his presentation, which he calls “an emotional retrospective,” Als has organized “One Man Show: Holly, Candy, Bobbie, and the Rest” (Mar. 2-Apr. 24). The group exhibition, illuminated by nightclub-inspired colored lights, centers on photography and pays homage to a deceased transgender women Als knew, such as Warhol superstars Candy Darling and Holly Woodlawn. Jaskey explained that these subjects represent a “joy and freedom” in “being who they wanted to be, without labels.” The show’s roster numbers around 10 artists, including Als himself.

While The Artist’s Institute focuses on two artists a year, the 22nd edition of the Armory Show (Mar. 3-6) features 205 participating galleries from 36 countries spread across Piers 92 and 94. The contemporary section we walked through includes 113 galleries. Jaskey sees art fairs as occasions to engage with galleries in other parts of the world that she might not otherwise have the opportunity to visit. “You don’t have to use [fairs] in a commercial way,” she remarked.

We started at the booth of London gallery Laura Bartlett, a newcomer to the fair. Jaskey gravitated toward a set of works by Marie Lund, a Danish artist living in London. Among the works on view were a copper plate incised with two craggy dents, titled Raising the Vessel, and three works from “The Very White Marbles” series, comprised of found wooden sculptures whose individual features Lund has carved out (all 2016). “Her work is about giving shape or taking shape away,” explained the gallery’s associate director Katharina Worf.

Jaskey has followed KOW’s program since it opened in 2009, after being introduced to the gallery by represented artist Michael E. Smith. In 2008, Jaskey curated one of Smith’s first solo shows at her Philadelphia project space. Jaskey explained that both Smith and gallery director Nikolaus Oberhuber were huge music fans. “I just met DJ Screw’s cousin on a trip to Houston,” Jaskey told Oberhuber. They traded reminiscences of the legendary Screwed Up Records & Tapes, a Houston store specializing in the slow, repetitive chopped and screwed hip-hop genre the DJ pioneered in the 1990s.

After admiring some Conceptual statement works by Ian Wilson at Brescia’s Galleria Massimo Minini and “Demonstration Drawings” by Rirkrit Tiravanija at Los Angeles’s 1301PE, Jaskey paused at the stand of Galeria Fortes Vilaça—another first-time participant in the Armory Show. Jaskey admired Evolutions, a lenticular print from 2014 by New York-based artist Agnieszka Kurant. The work is based on mathematician John von Neumann’s algorithmic theory of self-producing automata. Victoria Dreesmann, from the gallery, explained that Kurant’s print includes “three juxtaposed images [generated by the theory] of the same organism, each 50 generations apart.”

Our next stop, at Sprüth Magers’s booth, was a highlight for Jaskey. She spotted a cream-and-chrome-colored Rosemarie Trockel ceramic titled Diapir, from 2011. “This is similar to one displayed during Trockel’s Artist’s Institute season in 2012,” Jaskey remarked. “I love her ceramics. They’re among her best pieces.” A 1966 work of colored acrylics on translucent plastic by California Light and Space artist Craig Kauffman attracted her attention, as well as the work of Greek artist Michail Pirgelis, who lives in Essen, Germany. Pirgelis uses decommissioned airplane parts as the grounds for minimal painting interventions, stripping paint away in sections to create shiny, reflective surfaces. He was one of Trockel’s students, explained Andrea Gegner, a director of the gallery’s London branch. This idea of a pedagogical legacy excited Jaskey, whose Artist’s Institute is embedded within a university.

On the other side of Sprüth Magers’s booth we ran into the Allison Freedman Weisberg, executive director of the New York nonprofit Recess. Weisberg, who recently wrote an article for A.i.A. about maternity and museums, talked shop with Jaskey for a minute about the importance of fair labor practices in the arts—something they both promote. “Recess is one of the few places in New York where artists can experiment with a great deal of institutional freedom regarding their projects’ visibility and duration,” Jaskey said, remembering commissions she had seen at Recess by artists like Yve Laris Cohen, Malik Gaines and Alexandro Segade, and David Horvitz. “Another platform that’s become increasingly important to emerging artists and curators is SculptureCenter’s annual In Practice program,” she added, stopping into SculptureCenter’s small booth. There she eyed prints by Anthea Hamilton and an edition of photographs by five female artists including Leslie Hewitt, who will mount a solo show at the Long Island City space in May.

Grabbing a quick coffee before dashing back to the Upper East Side, Jaskey glanced at Cameron Rowland’s sculpture on the front cover of Artforum. Rowland, whose work is on view in MoMA PS1’s Greater New York and at Artists Space, has garnered praise for his political, conceptual approach. “He was the first employee I ever hired,” Jaskey recalled. Rowland conducted research for her on Christian Philipp Müller, a Swiss Conceptual artist representing an earlier generation of institutional critique. “He was also a student of Hilton’s at Wesleyan.” The coincidence is far from surprising. It comes out of the commitment to supporting artists that defines The Artist’s Institute.

How to Get Tickets to UFC International Fight Week 2022