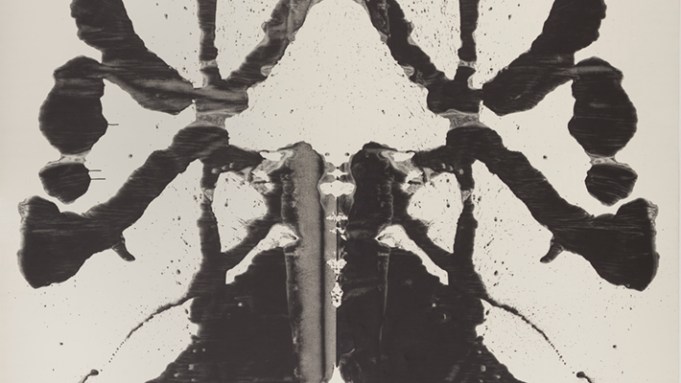 “From A to B and Back Again,” on view at the Whitney Museum of American Art through March 31, 2019, is the largest exhibition of Andy Warhol’s work in the US since the pivotal 1989 retrospective at the Museum of Modern Art that marked not only the artist’s death but also his official entry into the postwar American canon. In the intervening three decades, a pervasive, if generalized, Warholianism has settled across both sides of the sometimes murky border between the worlds of art and entertainment. Warhol’s aesthetic vocabulary has been picked up by so many makers that positing a cohesive model of working in the Warholian mode has become virtually untenable. Jerry Saltz invoked Warhol’s gnomic pronouncement about “fifteen minutes” of fame when reviewing Selfish, Kim Kardashian’s 2015 book of selfies. While artists ranging from Damien Hirst and Jeff Koons have exploited Warhol’s nihilism in the high-dollar marketplace, others such as Ryan Trecartin have picked up the Pop artist’s camp idiom, mining the seam between queer performance and déclassé kitsch and offering a historical insight into how the commercial landscape appeared in Pop as a kind of degradation: the hallowed space of art polluted by the trash (and trashiness) of those outside the sanctum.

The past few years have seen the post-Warholian sphere expand even further, with exhibitions such as “Ai Wei Wei | Andy Warhol” at the Andy Warhol Museum in Pittsburgh in 2015 and “Warhol and Mapplethorpe” at the Wadsworth Atheneum in Hartford, Connecticut, that same year. This partial list of artists with Warholian affinities does not even begin to account for musicians such as David Bowie and Kurt Cobain who have riffed on the styles and sounds to emerge from Warhol’s Factory. Given the sprawling web of connections and references, both intentional and inferred, it is all the more important to identify figures whose work has specific and significant precedent in Warhol’s own.

One of the most interesting and serious attempts to grapple with Warhol’s legacy can be found not in the visual arts but in the music and writing of Jay-Z. “I’m a work of art,” Jay-Z claimed in a 2009 lyric, “I’m a Warhol already.” The curious verse comes from “Already Home,” which celebrates the rapper’s ascent into the annals of music history. The album featuring this track debuted at the top of the Billboard charts and broke Jay-Z’s previous tie with Elvis Presley for the most chart-topping albums. In a song recounting his historic achievements, the Warhol citation may appear as a throwaway at first. But there is something deep and specific about Warhol’s place in Jay-Z’s musical universe—something that addresses itself to the complex nature of success and fame.

Indeed, Jay-Z, whose given name is Shawn Carter, has a habit of alluding to Warhol in his music and writings. He has signed blog entries as “Andy WarHOV,” an amalgam that incorporates his self-given nickname of “J-Hova,” or the God of Rap. He selected a painting from Warhol’s “Rorschach” series (1984) for the cover of his 2010 memoir Decoded and reprised the odalisque pose from a famous photograph of the artist at the Andy Warhol Museum in 2013. What does it mean that Jay-Z might brag about “[George] Condos in my condos,” while he considers himself to actually be a Warhol?

I would contend that Carter’s invocations of Warhol are best understood in the context of his meditation on what it means to be a successful black man in America today. Carter frequently casts himself as the heir to both white and black culture, describing himself in various lyrics as both the new Frank Sinatra and the new Jean-Michel Basquiat, inverting expectations about the culture industry’s appropriation of ostensibly authentic black music. Furthermore, Warhol’s legacy offers Carter a specific kind of precedent, that of an outsider who used the commercial marketplace as a lever to enlarge the sphere of the cultural elite.

As Carter details in Decoded, the signal event of his youth was crack cocaine’s arrival in American cities. Carter himself quickly was sucked up into the life of “the hustler”—selling crack near Trenton, New Jersey—while he worked on music with friends from the Marcy Homes, the housing project in Brooklyn where he grew up. He aspired to use his music to make sense of what he witnessed, to write lyrics with the drama and the complexity that these seemingly incomprehensible events entailed.

As he honed his craft, Carter’s music became singularly adept at telling these stories from both sides. One of his most iconic tracks, “99 Problems” (2003), relates the story of a racially motivated traffic stop. The officer suspects something, but understands he is on shaky legal ground conducting a search without probable cause. The driver knows that legally and perhaps morally, the officer is in the wrong, but that such niceties will matter little if the drugs stashed in the trunk are found. The dialogue between the two crackles with the tension they both recognize but cannot acknowledge.

Very quickly, Carter and his circle discovered material success in both the drug and the music worlds, and like many rappers, the motif of the lavish lifestyle entered into his lyrics. Notably, Carter’s allusions emphasize not only the financial means required to access a plane of refined luxury, but also the taste and the discernment to distinguish within it. As he emphasized in Decoded, the rap world’s obsession with Cristal champagne had initially as much to do with bragging that one knew what Cristal was as having the funds to pay for it. Carter’s first lyrical allusion to art fits this mold. On the 2002 track “What They Gonna Do,” he drawls, “I flow too many ways / Got an arch in my flow / All sorts of flow, Rembrandt, Rilke I am art with the flow.”

When critics have tackled the subject of the art world in Carter’s music, it has typically been in this paradigm of bling by erudition. But Carter’s conceptual relationship with Warhol is much more nuanced than his name-dropping of Picasso, Hirst, and others. Like the traffic stop in “99 Problems,” these glittering successes always come with a counterpoint that makes the situation more complex than it initially seems. Warhol is one of Carter’s numerous white touchstones—along with Sinatra, Bob Dylan, and Kurt Cobain. The first track of Carter’s most recent album opens with an extended riff on Nirvana’s “Smells Like Teen Spirit,” in which Cobain’s frustrated repetition of the demand to “entertain us” has been substituted for the anxiously flattened realization that “we all just entertainers.” His incorporation of an iconic Nirvana hook seems to symbolically turn the problematic racial history of rock on its head.

Warhol and Cobain—along with Biggie Smalls and Basquiat—are figures Carter sees as predecessors whose careers were cut short by struggles with the burden of fame. It is characteristic of Carter’s creative eye to note the analogs between Valerie Solanas’s attempt on Warhol’s life and the myriad shootings that plagued the rap world in the mid-’90s. When Basquiat died of a tragic overdose in 1988, Warhol lost a closely held protégé; Carter watched from the near periphery as Biggie, one of the brightest hip-hop stars to emerge, was suddenly extinguished.

But Carter is heir to Warhol in success as well as in tragedy. Much as Pop art rewrote the meanings of comic books and soup cans, Carter notes in Decoded that hip-hop transforms everything into which it comes into contact. “Cristal meant one thing,” he writes, “but hip-hop gave its definition some new entries.” In 2006, the Economist quoted the managing director of the house of Roederer, which produces Cristal, on his reaction to the rap world’s embrace of his product: “We can’t forbid people from buying it.” Carter, like many in the hip-hop community, was incensed. He purchased a majority stake in a champagne producer in order to seize control of some of the wealth being generated by rap’s lyrical promotion of luxury alcohol. The gold bottles of Carter’s Ace of Spades champagne have become ubiquitous in rap’s visual language of conspicuous consumption.

At the outset of his career, Warhol insisted that the power of the market was fundamentally leveling. “A coke is a coke and no amount of money can get you a better coke than the one the bum on the corner is drinking,” he wrote in The Philosophy of Andy Warhol (1975). But this pronouncement, from a period when screenings of his films were raided by the police, belies the trajectory of ascent in Warhol’s career, which led him to embrace the status of luxury spokesmodel and presidential portraitist. Carter’s life and lyrics follow the same arc—run-ins with the New York cops, a place at the leading edge of a new art form dismissed as hopelessly degraded, and a gradual climb into the echelons of power. Warhol was tapped by the Democratic National Committee to help with Jimmy Carter’s appeal to young voters, and three decades later Jay-Z was proud to claim that he was “a small part of the reason the president is Black.”

For Carter, as for Warhol, the move from margin to center passed through the market: the potential of the homogenizing aspects of commodity consumption to open up access to the elite. Personifying that process was essential to the image and the success of both of them. As Jay-Z put it in one of his most memorable lines, “I’m not a businessman, I’m a business, man.”  There are few artists who would have shared this sentiment more deeply than Warhol.

A special thank you to Thomas Willis, conversations with whom inspired this piece.