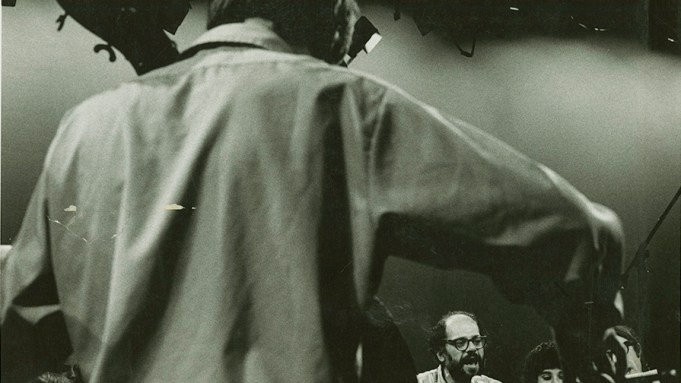 While Arthur Russell managed to release only several proper albums before his death from AIDS-related complications in 1992 at age forty, an ongoing effort to collect and release material from his genre-spanning oeuvre has created a sense of sustained relevance. His presence in contemporary pop continues to expand. Kanye West sampled Russell’s “Answers Me” in “30 Hours,” on his 2016 album The Life of Pablo; British techno producer Andy Stott recently released a whirling Balearic remix of “Home Away From Home”; and indie-pop outfits like Frankie Cosmos and Krill have cited Russell by name in song lyrics. Born and raised in Iowa, Russell initially trained as a cellist, but after he moved to San Francisco at eighteen and then to New York in his twenties, he expanded his studies to include electronic composition, North Indian classical composition, and linguistics. As a result, there are seemingly innumerable points of entry into Russell’s work: his idiosyncratic disco singles, linking him to the likes of DJ Larry Levan and the dance club Paradise Garage; his hypermodern minimal compositions; or his country-inflected lyrical songwriting. Russell’s fans—however they find themselves drawn into this vast body of work—often connect to his music in an intensely personal way.

In “Do What I Want: Selections from the Arthur Russell Papers” at the Brooklyn Academy of Music through May 14, curators Nicole Will and Jonathan Hiam deal with this expanse of narratives by making Russell’s singular personality a focal point in a non-chronological presentation. The exhibition of archival ephemera from the collection of Russell’s longtime partner Tom Lee is tucked away in two rooms in BAM’s Peter Jay Sharp building. I’m wary of exhibitions of ephemera as a means to access sonic histories; they rarely seem to activate anything other than nostalgia. But the materials in this show—even if they ultimately represent a relatively small sampling of Russell’s oeuvre—fill in the gaps for understanding an artist whose work was nearly always incomplete.

That’s not to say that there isn’t something a bit scrappy about this arrangement. It’s split in two for reasons that have perhaps more to do with space than concept: the main room is in a lounge on BAM’s first floor, and a second, less-crowded grouping of materials focused on Russell’s involvement with New York dance music is in a small gallery off the BAM café. Works in the main space are loosely organized by project rather than chronology. A group of tender photographs of Russell (handsome and smiling, with Lee or family members) leads into documentation of his relationship with Allen Ginsberg, including the sleeve of Audika’s 2010 vinyl release of their 1977 collaboration “Ballad of the Lights,” as well as the cover of Buddhist meditation master Chögym Trungpa’s poetry collection First Thought Best Thought. Ginsberg wrote the introduction for that book, and its title is a phrase associated with his own poetic style. First Thought Best Thought also names a posthumous Russell release from 2006 that contains a selection of his instrumental pieces. As the wall text notes, in Ginsberg’s eulogy at Russell’s funeral he referred to the artist’s aim to produce what he called “Buddhist bubblegum.”

The influence of Buddhism on Russell’s creative practice is a recurring thread throughout his life and work. In his Instrumentals from the early 1970s, Russell created a sequence of warm, droning, improvisational phrases to accompany slides of landscape photography by the Buddhist priest Yuko Nonomura, his former teacher. A nice chunk of wall space—with sweet cloud-dotted blue wallpaper—is dedicated to ephemera surrounding performances of the sprawling composition. This installation in turn introduces a cast of collaborators, including reflections and notes from Nonomura, musicians Russell worked with (like Ernie Brooks, who Russell also played with in the art-pop band The Necessaries, and Rhys Chatham, director of the Kitchen and Russell’s one-time roommate), and representatives of the various downtown New York arts institutions that supported his work (both still-active venues like the Kitchen and Experimental Intermedia Foundation as well as influential, but now shuttered, spaces like the Alternative Museum).

Singular as he may have been, Russell belongs to a dense host of microhistories. It’s not surprising that the show’s central wall is so packed that you have to kneel to read some of the accompanying texts. Many of the composers and musicians who briefly enter the story piqued my curiosity. I found myself wondering about Russell’s relationship with the minimalist composer Julius Eastman, whom he invited to conduct his 1983 piece “Tower of Meaning.” The New York Public Library recently acquired Russell’s archives, and once those are fully accessible to the public, it will surely be easier to delve deeper into Russell’s practice and legacy.

Russell’s lyric sheets and composition books are some of the more charming objects on view. These often contain seemingly irreverent asides but, per the words of Ginsberg, those first thoughts are, of course, valuable. Lyrics to his song “Lucky Cloud” are written in the margins of what appears to be the blank side of a poster: “Lucky cloud in your sky/ A little rain/ A lot of fun/ One kiss and I go overboard.” These asides become a center of sorts. Russell could make an errant squall of amplified cello feel like the emotional core of a song, and echoes of that generative impulsiveness can be found in his disco productions, notes for which are on display amid party photographs and album artwork in the upstairs gallery. Lyrics are written the way they’re felt: “FREAK OUT I want you endlessly/ I miss you (and you’re here).” In this sense, keeping his dance music close seems important: we see how the libidinal thrills of disco and the plaintive lyricism of country music inflect Russell’s more avant-garde work with grounding pop comforts. Motifs float freely between these projects: the sea and the sky and the things that float in them, whether sailboats or “lucky clouds.”

There are many ways to love Russell (love—queer, familial, spiritual—seemed to float throughout these materials). This exhibition reminded me that I love him for way he builds on what he called “parenthetical thoughts,” the ideas and feelings that crop up from one’s unconscious, blurry but potent. His music troubles the distinction between abstract sound and language. The sensation that comes from listening to it is challenging and moving all at once. There seems to be more to uncover still, and infinite ways to arrange this expanding archive.