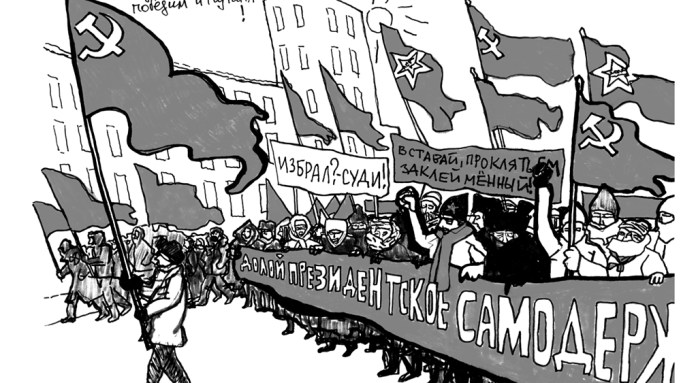 Over the past eight years, Russian artist Victoria Lomasko has captured, in sketches and portraits, the people and movements at the periphery of her country’s political life. She has drawn protestors, prisoners, sex workers, enslaved migrants, Orthodox activists, and striking truck drivers. As she sketches, she asks her subjects questions, probing for the crux of their experiences the way a journalist would. By doing so, she unearths stories that run counter to the one-dimensional narratives found in the mass media.

Last month, n+1 published a collection of Lomasko’s graphic reportage in a book titled Other Russias. The volume presents a selection of her drawings from the past eight years––what Lomasko describes in the introduction as “the story of ordinary people, unfolding against the background of history.” St. Petersburg-based writer Thomas Campbell translated the text from Russian, but this is not a book in translation. It is a new book, released in the United States because there is no will to publish it in Russia. It is somewhat like tamizdat, as illegal books printed outside the Soviet Union were called. But in modern Russia books are no longer forbidden by state censors. Instead a network of government agencies, internet trolls, religious activists, and right-wing extremists pressure publishers and galleries into censoring themselves.

In 2010, she and the journalist Anton Nikolayev documented the trial of two curators, Andrei Yerofeyev and Yuri Samodurov. The pair had put on an exhibition of works banned from museums for offending religious sentiment. A group of Orthodox activists vandalized the exhibition, but they were not prosecuted. Instead, the curators were charged with inciting religious and ethnic hatred and found guilty. Lomasko compiled her drawings of the trial into Forbidden Art (2012). Lomasko’s drawings are now on view at the Garage Museum of Contemporary Art as part of its first Triennial of Russian Art, but the Garage does not carry Other Russias in its bookshop (instead, excerpts on newsprint can be taken from the gallery).

Lomasko grew up in Serpukhov, a town outside Moscow. Her father was a painter and pushed her to pursue art despite her initial interest in writing. She studied graphic art and book design at the Moscow State University of Printing Arts, then took classes at the Moscow Institute of Contemporary Art (known as the Institute of Problems of Contemporary Art in Russian). There she started to kick against the confines of the Russian art world––what she called its obsession with Conceptual art. In Other Russias, Lomasko recounts turning in her first work of graphic reportage there and being told that no one draws from life in the twenty-first century. Despite this, she persisted, honing her skills at sketching and adding words to round out her portraits.

Other Russias is divided into two sections. The first documents people who have fallen through the cracks of Russian political life. It contains a chapter on juvenile prisoners, with sketches and interviews Lomasko’s produced when she worked with the Center for Prison Reform, giving drawing classes in juvenile detention facilities. Another chapter comprises drawings of sex workers as they take short breaks between clients. Sketching the women as they smoke, talk, and take HIV tests, Lomasko catches the contours of their profession and their lives. They complain about men in general––and their husbands and the police in particular––but are prosaic about their work. “It’s a normal life. And an abnormal one too,” one of the women says, leaning against a television set.

The strength of Lomasko’s method is on display here. With only a sketchbook and markers, she can slip into a hidden world and undertake extremely intimate documentation that would be hard to do with a film crew. Furthermore, her work anonymizes subjects who are engaged in stigmatized and illegal activity. Activist groups and NGOs that work with marginalized or persecuted communities are willing to give Lomasko access to their constituents, in part, because she can document their conditions without putting people in danger.

Lomasko rose to prominence during the 2011 protests, when tens of thousands of Russians poured into the streets and squares to decry the fraud-tainted legislative elections and Vladimir Putin’s announcement that he would run for a third term as president. The protests were the most significant popular mobilization since 1991 and united activists from across the political spectrum––Communists, nationalists, and liberals––with average people fed up with Putin’s authoritarianism and corruption. Lomasko chronicled the protests, sketching as crowds swirled around her. These drawings are collected in Other Russias, with other stories of activism and repression in the second section of the book, from the notorious Pussy Riot trials to an encampment that truck drivers made in a Moscow suburb to protest a new system of tolls that benefited one of Putin’s cronies.

When she started her graphic journalism, was not comfortable approaching strangers and asking to draw them. She began by traveling to her hometown to draw and interview women about their lives. These portraits (included in the chapter titled “Feminine”) are heavily detailed, replete with shadowing and crosshatches. As her work developed, Lomasko  grew more confident, approaching strangers the way a journalist would. She also started sketching more quickly, skipping fine details, and using markers to make thick lines and shadows that recall nineteenth-century woodcuts.

In the US, Lomasko is often categorized as a nonfiction cartoonist, likened at times to Joe Sacco or Marjane Satrapi. However, her work follows a different lineage. She does not use sequential panels or otherwise attempt to convey a chronological progression. Instead, she captures what she sees in the moment like a photojournalist. In an interview this year in Accent magazine, Lomasko cited Stepan Yaremich’s drawing The Cruiser Aurora at the Neva, October 25, 1917 (1917) as a model for her own work. It is a rough sketch of a battleship whose crew staged a mutiny during the October Revolution. “You can’t really tell what is going on in the drawing,” says Lomasko, “because it was done so vividly and hurriedly, but you can feel that something remarkable is happening.” This is the essence of her work. It is rushed and immediate, trying to catch up with the political urgency of the moment or a life that has briefly slipped out of the shadows.

In “Unwanted Women,” a recent exhibition of Lomasko’s work at Ortega Y Gasset Projects in Brooklyn, many of the drawings reproduced in Other Russias were on display in their original form, torn from a sketchbook and pinned to the walls. The show centered on women, especially the women of Lomasko’s hometown and the sex workers she visited. It also included colorful drawings taken from her new project documenting women’s lives in some of the former Soviet republics. In one sketch, bearing just accents of color, queer women crowd an underground nightclub in Baku, the capital of Azerbaijan.

During the 2011 anti-Putin protests, demonstrators often chanted “we exist” as they poured into the streets. With simple, figurative representation, Lomasko takes that cry and puts it on the page, recording the currents of history through the experiences of the average person. It is a dynamic hybrid of popular art and journalism, and, in a country turned inside out by authoritarianism, an act of remarkable defiance.