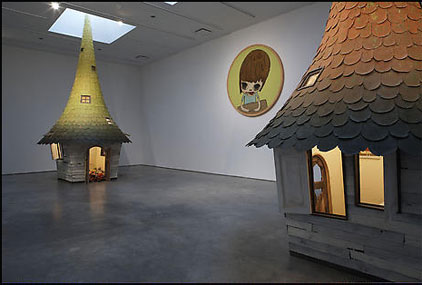 Nobody, it seems, is gutsy enough to buy barely dry art these days — expect for the Israel Museum. One of the last deep-pocketed institutions still aggressively collecting recent work, the museum’s contemporary council/acquisitions committee just snapped up a handful of works made last year to add to its permanent collection.  The museum has a history of buying artists early in their careers who later become quite prominent, brags director James Snyder, with early purchases of works by Basquiat and Hirst, for example. And the museum bought Olafur Eliasson “long before” his waterfalls and Museum of Modern Art exhibition, says Snyder. Now, with donors like Susan Steinhardt, Felix Rohatyn and Maureen Cogan, and a $12 million gift in April from the Safra Foundation, the institution is flush and is buying to fill an expansion set to open May 2010.

So who got the (possibly prescient) nod this year? Committee members liked the ironic, deadpan imagery of photographer Anne Collier (a Whitney Biennial veteran), adding her Notes and Observations (#1) to the collection. They also okayed the purchase of a Janet Cardiff & George Bures Miller installation; their The House of Books Has No Windows, incorporates about 5,000 books. The museum acquired a diptych by Anthony Golcolea, a Cuban-born American known for his eerie self-portraits; and a Stan Douglas digital print, Hastings Park, 16 July 1955, 2008. The Museum also bought “older” work, an Angela Strassheim from 2004 called Untitled (Father and Son), a vivid, affecting image of suburbia.

All told, the museum bought five out of the eight works suggested by curator Suzanne Landau. While other Jewish charities were burned by Benrie Madoff, says Monique Birenbaum, executive director of the American Friends of the Israel Museum, “our members were smart enough not to put all their eggs in one basket.” That said, the institution, which bought mostly multiples, got off cheap. The spending spree totaled about $250,000.

All is Forgiven in Basel

When Marianne Boesky skipped Art Basel Miami last December, she said at the time colleagues warned her “she’d never get back in.” But all, is apparently, forgiven. She is back in the Basel fold for the Swiss version opening June 9. She’s teaming with Blum & Poe and Tomio Koyama Gallery for a Yoshitomo Nara show at the Art Unlimited space. And in her booth at the main fair, she’ll also be showing works by Barnaby Furnas and John Waters, among others. Also back, after being MIA in Miami, is Gavin Brown. He’s showing Peter Doig, among other artists, plus Urs Fischer, who gets a show at the Bowery-based New Museum next fall.

Did it work to go downscale? The Public Art Fund, best known for its Eliasson waterfalls installation, skipped its usual tony charity benefit and instead threw a billiards and bowling party right before Memorial Day. With team captains like artist Spencer Finch (soon to decorate the High Line), a cameo appearance by Mayor Bloomberg and nifty bowling shirts by Lawrence Weiner, the event was a far cry from last year’s cocktails at the Lighthouse at Chelsea Piers. When the chalk dust settled, the fete raised $370,000 – less than in the past two years, but with lower event costs, says the Fund – and was completely sold out. Top bowler was co-host and triple-spaced Chelsea art dealer Perry Rubenstein, who won a bowling trophy made by artist Keith Edmier for a top score of 177.

“If you think the art business is weird, the film business is 100 times weirder,” says New York private art dealer Edward Tyler Nahem, who’s gone Hollywood, at least temporarily. Nahem’s the  executive producer on a independent film about charismatic Senegalese singer Youssou Ndour that opens in New York at the Paris Theater and Brooklyn Academy of Music this week.  (It’s in Los Angeles and other cities next month). A longtime film buff, Nahem is known in the art world for his popcorn-filled summertime film screenings in his Sagaponack, N.Y., backyard, but this movie was more of a commitment. “It’s a good thing the art business is a little quiet, because I’ve been eating, breathing and sleeping this film,” says Nahem, of “Youssou Ndour: I Bring What I Love”. He’s a longtime fan of Ndour, a superstar in Dakar and a prominent Muslim activist against malaria. Nahem says he put up the first money for the film and then raised more, which paid off after the film won awards at a trio of film festivals. Despite the travails, would he try the movie business again? He says, “if the right project came along.”

Is Aging Whisky Bad for the Environment? Scotland Just Commissioned a Study to Find Out.