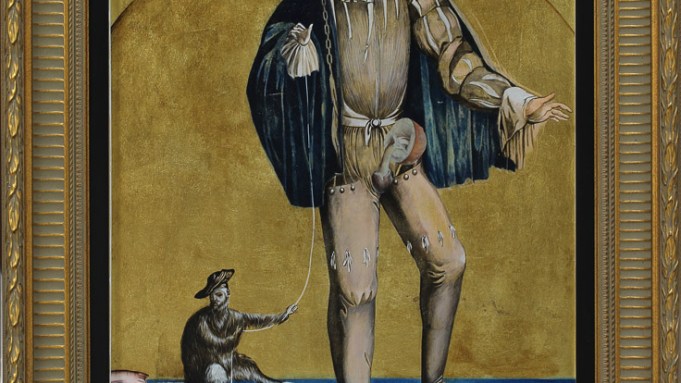 Art Basel in Hong Kong, formerly known as Art HK, is the place to go for East-meets-West-style work like Wu Di’s Plaything (2013). The painting shows a monkey-headed human figure in Western Renaissance garb on the end of a leash held by a human-headed monkey, all against a background of old master-style gold leaf.

The artist, who is represented by the Shanghai Gallery of Art, showed A.i.A. an image of the print that had inspired the work on her phone. She didn’t know its origins or date, she said, speaking through a translator: “I downloaded it from the Internet.”

Overall, Tuesday’s preview of the inaugural Art Basel Hong Kong (May 23-26) saw steady sales and increased numbers of visitors from outside the region.

Major area collectors such as Budi Tek and Uli Sigg were in attendance, along with museum directors from near and far, such as the Ullens Center for Contemporary Art’s Philip Tinari and Museum of Contemporary Art Los Angeles’s Jeffrey Deitch.

This is the first year that the five-year-old fair is under the management of Art Basel. With the Swiss conglomerate newly behind it, the fair drew visits from many more European dealers than in past years, according to several gallerists who spoke with A.i.A. during the fair’s first hours.

The fair’s 245 exhibitors, hailing from 35 countries and territories, are spread over two floors of the gigantic Hong Kong Convention and Exhibition Centre, on Victoria Harbor. Younger galleries, in the Discoveries section, paid as little as $14,000 for their stands, while larger booths ran into the upper tens of thousands.

Dealers were reporting sales by the end of the first day, though the VIP preview wasn’t marked by the feeding frenzy that sometimes characterizes Basel’s home fair in Switzerland or its 11-year-old outpost in Miami Beach.

Dealers told A.i.A. that an already well-run enterprise is only getting better under new management.

“The fair’s layout is more orderly and calm than in past years,” said Daniel Lechner, of New York’s Cheim & Read Gallery, which has participated in the Hong Kong fair in the past, though not this year.

The question on many minds has been whether Art Basel’s acquisition of a 60 percent share of the fair would lead to it becoming more generically global. The organizers are keen to emphasize that over 50 percent of the participating galleries are from the Asia-Pacific region­. Some 26 exhibiting galleries have spaces in Hong Kong, though a few of them are outposts of global enterprises like Gagosian.

Though attendance figures built slowly over the day, Arnold Glimcher, of Pace Gallery, which has had a venue in Beijing since 2008, told A.i.A. that a large part of the fair’s audience would attend over the weekend, when businessmen from Malaysia, Taiwan and Indonesia come into town.

Magician Space, from Beijing, is showing a work by Chinese artist duo Zhuang Hui and Dan’er in Encounters, a selection of large-scale sculptures curated by Yuko Hasegawa, chief curator of the Museum of Contemporary Art, Tokyo. The artists’ 11 Degree Incline, a giant black-lacquered metal sculpture of classicizing architectural ornaments, is based on garden architecture from the Qing Dynasty Summer Palace that was designed by an Italian, Giuseppe Castiglione.

While the uptick in Western visitors was the most salient first impression for many exhibitors, different dealers come to Hong Kong looking for different things. Simone Battisti, of Gladstone Gallery, New York, more highly valued the Malaysian and Chinese collectors he was meeting during the preview. “Why come to Hong Kong to talk to European collectors?” he said.

Rose Lord, of New York’s Marian Goodman Gallery, hadn’t noticed a significant increase in American visitors this year compared to the previous two trips the gallery made to Art HK. “Frieze New York was just last weekend,” she said by way of explanation. “And 15 hours is still a very long flight.”

How NBA Champion Tony Parker Traded the Hardwood for the Vineyard