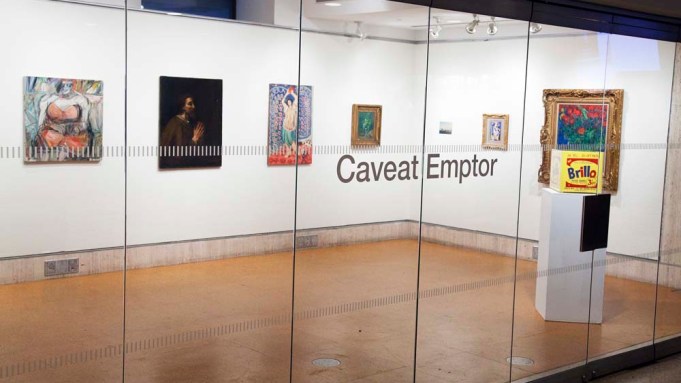 In a unique take on the traditional summer group show, “Caveat Emptor” airs one of the art world’s most sensitive topics, the difficulty of distinguishing between worthless knock-offs and priceless originals. Forgeries of works by artists such as Rembrandt van Rijn, Willem de Kooning and Andy Warhol that were confiscated by the Federal Bureau of Investigation are currently on view at the Center Gallery at Fordham University Lincoln Center, New York (through Aug. 9).

Though the paintings may appear to be blue chip canvases by old masters and contemporary superstars, the show’s title, Latin for “Let the buyer beware,” alludes to the true status of the works. The other “artists” included are James E. Buttersworth, Marc Chagall, Tsuguhara Foujita, Juan Gris, Paul Gauguin, Henri Matisse, Maurice Prendergast, Pierre Auguste Renoir and Hale Woodruff.

The show was co-curated by artists Daniel Small and Stephan Apicella-Hitchcock, who is currently in residence at Fordham. Until Thursday, the FBI will be using the gallery as a registration center for its International Conference on Cyber Security (also being held at the university). The FBI’s presence in the gallery serves to remind viewers that what seem to be art masterpieces are actually legal evidence.

Featuring 13 paintings and one sculpture, the exhibition is drawn from the holdings of the FBI Forgery Division’s New York office. Much of the work in the show originates from two cases dating to the late ’90s and early 2000s.

New York art dealer Ely Sakhai specialized in purchasing minor works by important modern artists and creating duplicates on old canvases to sell on the Asian market. He backed the forgeries with the certificates of authenticity that accompanied the actual paintings. Later, he had the originals re-authenticated so he could flip them in New York or London. The scam unraveled in 2000, when a Tokyo gallery attempted to resell its copy of Gauguin’s Vase de Fleurs (Lilas) at Christie’s at the same time that Sakhai put the real thing up for auction at Sotheby’s. The fake Gauguin is part of “Caveat Emptor,” which also features Sakhai’s version of Renoir’s Etude Jeune Femme and no fewer than two canvases posing as Chagall’s La Nappe Mauve.

Finally caught selling counterfeit Alexander Calder mobiles in 1997, art dealers Monica Savignon and Manuel Fernandez made at least $1.5 million before their duplicity came to light. They even fooled the artist’s grandson, Alexander S.C. Rower, who authenticated one piece on behalf of the Calder Foundation. A subsequent investigation found that the couple possessed forgeries of a multitude of artists’ work. Their fakes on display at the Center Gallery include works by Warhol, de Kooning, Matisse and Prendergast, among others.

In both cases, the dealers were prosecuted, but the artists who created the fakes remain unknown. “The show masquerades as a room that’s been moved from the Metropolitan Museum to Fordham,” Small told A.i.A. in a phone conversation. “But then there’s the strange twist ending: these paintings, which had been worth so much based on attributions to important names, are actually by people who are completely anonymous and will never come forward about their involvement in producing them.” Small knows the true provenance of only one piece in the show, a nautical scene in the style of Buttersworth by well-known forger Ken Perenyi.

Though the FBI has definitively debunked the authenticity of each piece in the show, authorship is not always so straightforward. Works are often reattributed by experts multiple times over the years, their status as originals or copies, masterworks or creations of an artist’s workshop, switching back and forth. Perenyi claims that many of his paintings are still sold at auction, and a now officially recognized Vermeer, A Young Woman Seated at a Virginal, was once thought to have been made by the 20th century’s most famous forger, Han van Meegeren.

The show also raises thorny questions about the nature of art. A recent exhibition by artist Elka Krajewska, “Damage: No Longer Art,” at Columbia University, showed works of art that had been damaged and were considered a total loss by their insurer. In some cases, the damage was not visible to the naked eye. The shows posed a similar quandary: when is a work of art not a work of art?