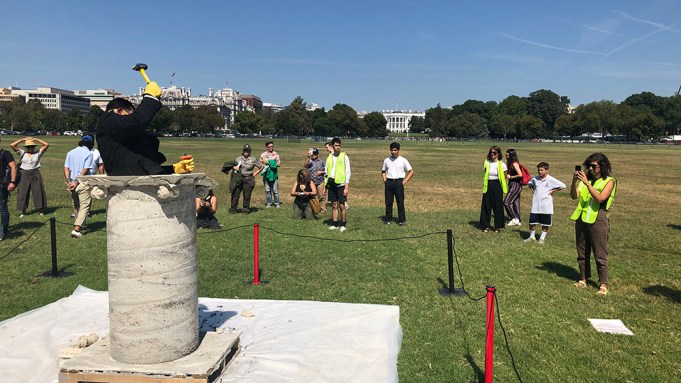 “It is not an art event. It is a First Amendment demonstration,” a ranger from the National Park Service clarified. This member of the free press had asked which governmental entity oversees the Ellipse, a grassy expanse between the White House and the Washington Monument where rafa esparza’s performance took place on the afternoon of September 21. Once the matter of the official designation of the event was settled, the ranger told me that the area is managed by the National Park Service, which for purposes of permitting considers artistic speech to be commercial, requiring greater expense and governmental review. Because esparza’s speech was political, it was permissible. It was still subject to a litany of police and bureaucratic constraints, only some of which were memorialized in an eight-page demonstration permit negotiated over several months by Performance Space New York, which co-commissioned esparza’s project, bust: indestructible columns, with Ballroom Marfa. Other restrictions materialized without notice throughout the day.

For his demonstration, the artist chiseled his way out of a concrete, Ionic column modeled after the Neo-Classical architecture of Washington, D.C., as seen in the portico of the White House in front of him. esparza has been encased in concrete in previous, related performances, such as bust, a meditation on freedom (2015), which began with esparza’s friends and family burying him in concrete and gravel up to his chest on a street full of bail bondsmen near the Los Angeles County Jail. As part of “Live Artists Live: Simultaneity,” a 2018 performance event curated by Nao Bustamante for Pacific Standard Time in Los Angeles, esparza was built into and extricated himself from a reclining concrete form that evoked the Mesoamerican sculpture type known as Chacmool. Late Saturday morning, Performance Space was informed that military explosives experts would need to inspect the completed column before it could be installed, and before esparza could enter it; it was hurriedly finished offsite and trucked to the park. Everyone stood back until three agents and a bomb-sniffing dog gave the OK for the column to be placed on plastic sheeting on a temporary platform, surrounded by stanchions and at least four attendants in reflective vests. Dressed in a black suit and white shirt, esparza mounted two ladders, dropped into the column, and set to work.

“If he does not wear a respirator I am shutting this down,” warned the park ranger. With esparza’s hammer in full swing, fragments of the cornice quickly gave way. No dust or rubble may contact the lawn, came another warning, and so pashminas and shawls were spread out while a staffer ran to the hardware store for more plastic sheeting. The action drew attention from passersby, who occasionally asked the Secret Service bike cops what was happening. “He put himself in there, and now he’s getting himself out,” one replied. Among the tourists were many experts on chiseling oneself out of concrete columns, who freely offered their advice to the artist, or to no one in particular. “Use a power drill.” “It’s too hot for that suit.” “Build a wall.” “Tear down this wall.” The public engagement warmed the hearts of the organizers, who sought to document it. If any Performance Space staffers—designated by their green vests—take photos or video, warned the ranger, “I am shutting this down.”

Fortunately, the curated audience included several dedicated documentarians. The D.C. action was only Act 1 of a larger project; Act 2, took place Monday night: a dinner and symposium in PSNY’s newly renovated and rethought space in Manhattan. The column was the centerpiece of a meal prepared by chef Gerardo Gonzalez, and video from Washington was combined with reflections and texts from collaborators esparza had invited to witness the demonstration. In Washington, deli sandwiches were on hand for collaborators and staff, until the ranger ordered them removed; no picnicking was permitted, and the sandwiches did not conform to commercial food handling regulations. Water bottles were allowed to remain, though esparza himself did not drink during the brief moments he rested.

Following the 2017 Whitney Biennial, for which he constructed a rotunda from adobe bricks made with his father, esparza eschewed offers to show in commercial galleries. Instead he set out to form relationships with institutions and communities of color, immigrants, and the marginalized beyond his home in Los Angeles. The D.C. project is the first in Performance Space’s “Stages” series, in which artists take “performance as an act of creation for and toward the future” beyond the black box. Marfa Ballroom’s representatives, meanwhile, envision the project spawning additional interventions to flow back to their community in Texas, a bicultural border town where contemporary art carpetbagging abuts the organs of the state’s oppressive immigration policies. (In 2017 esparza completed a residency and show there with Timo Fahler, who helped fabricate the column for the D.C. project.)

Nearly two hours after he began, esparza was looking exhausted enough for Performance Space director Jenny Schlenzka to consider shutting it down for his safety. But he persisted, and soon enough stepped out of the body-sized gash he’d chiseled into the column. The artist moved to the shade to hydrate and accept the congratulations of his collaborators and viewers. After a few minutes’ rest, we spoke about his work.

He was surprised by the last-minute bomb inspection, and he and Fahler had to adapt quickly to finish the column. He was not aware of many of the other threats to shut the project down, because he was so focused on getting out. But like his father, he has worked construction and demolition, where being subject to sudden orders is “just the way it is.” Similarly, he did not strategize the column’s form, a remarkable synthesis of the phallic and the vulval; it resulted from the artist’s concerted effort to complete the labor—and to bear his defiant, queer, brown witness to the regime—before him. This assertion of presence, along with obtaining a compelling image (like Chris Burden, esparza prefers to illustrate his performance-based works with a single photo) were more important than producing a particular experience for a passing public. But esparza sees beyond the form and the image to the institutions and the communities he seeks to empower. He brought Performance Space and Ballroom Marfa together, far from their own centers, with an idea of connecting communities alongside him as he travels. These collaborators, he has said, are the “support columns for the communities we work within, building this other system working toward social justice.” By literally facing down the white supremacist regime wielding the power of the state against so many people like himself, esparza demonstrates the power of an individual: to make common cause with others.

How Peyton Manning, Joe Buck Teamed Up for a New Swing at Golf for ESPN