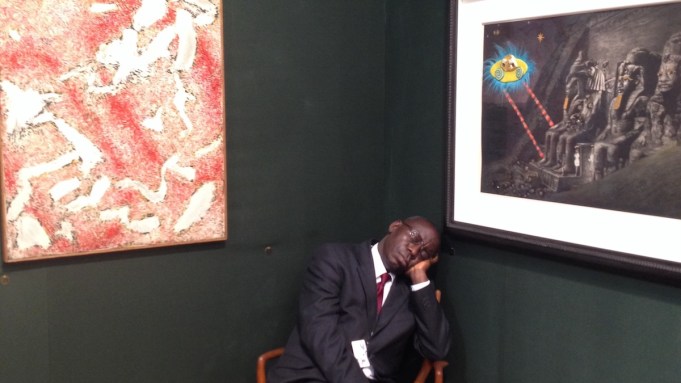 If there is one thing that dealers at Frieze London agree on, it’s that the fair’s 12th outing is defined by business as usual—and more of it.

The fair’s first day saw sales including Damien Hirst’s sculptural diptych Because I Can’t Have You I Want You (1993), sold for $7 million by White Cube (with six locations worldwide) and a 42-piece set of Francis Alÿs drawings at David Zwirner (New York and London) which went for $1 million. Lehmann Maupin (New York and Hong Kong), selling work exclusively by female artists like Tracey Emin and Mickalene Thomas, did so well that the gallery started the fair’s second day with a near complete re-hang of the booth, having moved out sold works.

International powerhouse Hauser & Wirth (Zurich, London, New York and Somerset) took the opportunity to announce Mark Wallinger’s joining the gallery’s stable by inviting him to curate its booth. A study in red and green is an installation inspired by Sigmund Freud’s study and featuring works by artists such as Louise Bourgeois, Martin Creed, Eva Hesse and Subodh Gupta. Wallinger included an enamel-on-steel painting from his “Labyrinth” series, based on Regent’s Park, where the fair takes place, priced at $50,000. Among the most eye-catching works is an actual security guard dozing in his chair in a piece by Christoph Büchel; the “concept” of the work is available for purchase for just over $100,000.

At the more modest end of the scale, Hannah Robinson of Mary Mary (Glasgow) reported the gallery’s best Frieze so far, with sculptures by Sara Barker and canvases by Jonathan Gardner going for prices ranging from $6,000 to $32,000. Smaller galleries are among the most ambitious. Cabinet (London) has dedicated its space to Simon Thompson and Ed Atkins, all works just a few weeks old and several of them collaborative.

To coincide with the fair, Sotheby’s and Christie’s are staging auctions expected to tally up to $426 million between them. Estimates of fair and auction sales during Frieze week are upwards of $2 billion, and fair organizers expect as many as 70,000 visitors. But as ever, participants attest that it’s not all about numbers, dollars and cents. As Gagosian director Mark Francis told A.i.A., “The great majority of art collectors would see themselves as philanthropic.”

UPDATE: This article originally misstated the price of Christoph Büchel’s work. It has been corrected.