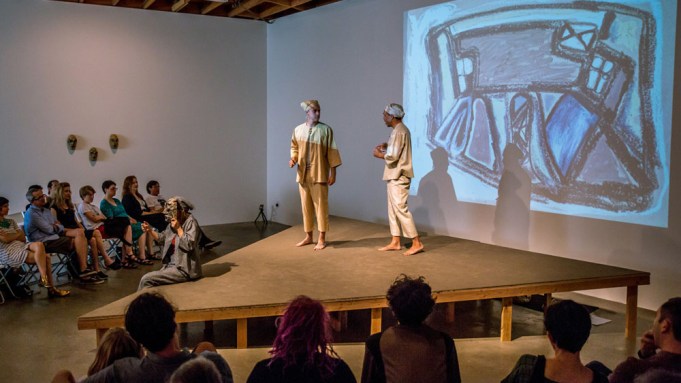 Summer in Los Angeles is “all about performance,” as per the title of a current series hosted by Chinatown gallery Human Resources L.A. (The month-long series includes performances by Linda Montano, Ron Athey and many more.) A.i.A. attended two recent L.A. performances that mobilize the genre’s own productive frictions as fodder for satisfyingly complex work.

On July 9, two nights before Jay Z transformed New York’s Pace Gallery into a music video set, James Franco, if only in blurry photographs, turned up in Cara Benedetto’s performance The Aesthetics of Love at Night Gallery. Benedetto delivered her deadpan, lecture-style performance in front of various cropped images of Franco and friends (Seth Rogen, Jonah Hill and others) culled from the artist’s own blurry iPhone photographs of posters for the summer movie This Is the End. Despite the ubiquity of Franco and the other (literal) poster children of a tiring genre of pubescent comedy, here they were rendered strange. The grainy portraits seemed softer, stranger and more intimate than the stars’ familiar personae.

The artist read scripted text aloud in a low, even tone; phrases such as “after her” and “after you” built a steady refrain. These phrases, suggesting both generosity and protocol, cued an assistant tasked with turning each computerized “page” of the projected PowerPoint. Its structure was that of a day planner, alluding to the calendrical anxieties exploited in the film’s end-of-the-world plot.

Superimposed graphics in the software’s default anodyne blue palette replaced the corporate content of the archetypal Powerpoint with wry, pop-psychoanalytic commentary. One pie graph was divided into uneven thirds labeled “came,” “coming” and “.com”, linking the movie’s incessant sexual innuendo with the common abbreviation for “commerce.”

After the performance came a panel discussion between Benedetto, Emily Liebert (a Columbia art history PhD candidate) and Suzanne Herrera (a Berkeley philosophy PhD candidate) that centered on feminism and “precarity,” a popular term in contemporary political philosophy for the conditions of immaterial (and often contingent) labor. Some theorists of precarity take the condition of shared instability as the basis for imagined community. Benedetto eloquently described her piece as investigating a “being-together that is different than the circle-jerk.”

Within and against the masturbatory logic of the film (made literal, in one of its scenes, in a heated debate about the etiquette of ejaculating on your friends’ stuff), Benedetto’s appropriation reminds us that for all its hubris and jocular immaturity, the movie is a story of shared and inevitable vulnerability: the apocalypse.

By contrast with Benedetto’s measured and academic tone, one can count on My Barbarian for a healthy dose of immodesty and spectacle. The Los Angeles-based theater troupe—Jade Gordon, Malik Gaines and Alexandro Segade—are known for their sumptuously playful appropriation and willful infidelity to style. Catapulting the subversive ’60s camp aesthetic of Charles Ludlam or Jack Smith into the new millennium, the obstreperous group nimbly cavorts with both high theory and bad taste.

For the opening of their mother-themed exhibition “Universal Declaration of Infantile Anxiety Situations Reflected in the Creative Impulse” (at Susanne Vielmetter Los Angeles Projects, through Aug. 24), My Barbarian presented, on July 13, an adaptation of Bertolt Brecht’s The Mother.

The troupe performed Brecht’s 1932 play (itself an adaptation of Maxim Gorky’s 1907 novel of the same name) on a custom-built plywood stage. The stage’s triangular shape, a subtle nod to Brechtian theory, was left spare, the room well-lit; behind the actors, projected drawings and text indicated changes in scene.

Set in Russia under the reign of Tsar Nicholas II, the play centers on the escalating radicalism of Pelegea Vlassova, mother of a revolutionary. Though at first she is horrified by the dangers facing her son and concerned only with getting dinner on the table, she soon finds herself distributing agitprop pamphlets at a factory (smuggling them in as sandwich wrappers), learning to read, and, finally, marching in protest and taking up the red flag of communism.

The Mother is emblematic of Brecht’s Lehrstücke (learning plays), which are didactic and participatory, and which foreground their own artifice. In My Barbarian’s presentation, rough-hewn masks occasionally indicated new characters, and the trio rotated, all playing each role in turn. The imploring voice of mother Vlassova was at once familiar and hilarious in its various incarnations. Brecht, too, understood the importance of comedy: while learning to read, Vlassova and company are taught “class struggle” and “exploitation” alongside the more basic words “cat” and “tree.”

Musical numbers paired odes to communism with a wink and a jazz hand. In true Brechtian fashion, the artists exhorted the audience to join in. The final song of the play had us deliriously chanting “work it / working mother.”

Second-wave feminists first highlighted the “invisible” work of housewives and mothers, important precedents to today’s discussions of precarious labor. This trope is taken up in the exhibition’s centerpiece, a new video, Working Mother (2013), which features vignettes with the artists’ own mothers, as well as feminist artists Eleanor Antin and Mary Kelly. The video’s tremors of intergenerational lineage and conflict are not limited to the fraught relationships between mothers and their children, visible in the group’s coy juxtaposition of Brecht’s dogmatic Marxism with today’s labyrinthine politics.