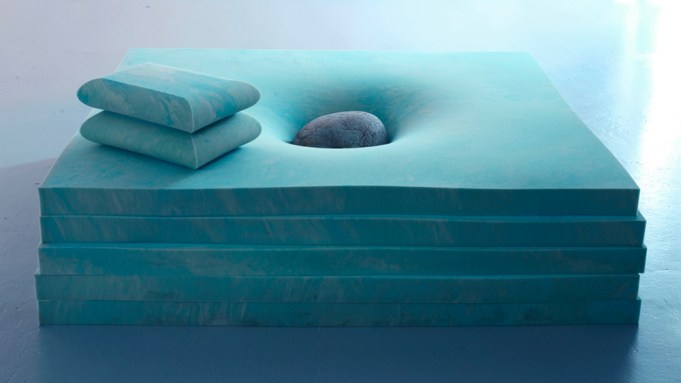 In a First Look profile for our October issue, Wendy Vogel discusses how Virginia Lee Montgomery subverts the paternalistic expectations of the business world in her sculptures and videos. “Montgomery . . . travels up to three weeks a month for her job as a graphic facilitator, diagramming the flow of ideas at focus groups and tech conferences,” Vogel writes. “So it seems fitting that her art highlights disruptions in the smooth machinery of capitalism.” Here, the artist shares a YouTube playlist of videos reflecting her interest in uncanny natural phenomena. —Eds.

I love falling into proverbial YouTube holes. The website is an incredible source of the wonderful, weird, and haunting. I frequently look for videos of outer space, natural phenomena, or uncanny things you “just have to see to believe.” From a metaphysical perspective, streaming YouTube videos is akin to watching waves of data rash inside a bounded lake, a process of continuous accumulation and flux that I find generative. Here are some videos that have recently been circulating in my head.

Footlight Parade (1933) – Human Waterfall. Footlight Parade is an elaborate musical about the travails of a Broadway director. In this clip, a large cast of showgirls performs complex, kaleidoscopic swim routines. I feel many things when watching this sequence, including horror, amusement, and joy. The choreography is seductive, but I can never shake off the knowledge that these women are being moved maneuvered like objects by men. Their snakelike formation triggers my ASMR. (Autonomous sensory meridian response is an involuntary bodily sensation brought on by sounds or movements. It feels like sparkles in your brain.)

Departing Space Station Commander Provides Tour of Orbital Laboratory. This NASA-made video shows astronaut Sunita Williams floating through the interior of the International Space Station. It’s somewhat educational: Williams indexes her surroundings and describes the ins and outs of day-to-day life in outer space. Her speech is fragmented and elliptical, as if her words are floating in space as well. At one point, she shows off her sleeping pod; every time I revisit that segment, I’m blown away as I think about the physical experience of dreaming in zero gravity.

1 Hour Kinetic Sand Cutting & Crunching | Tingly ASMR No Talking. There’s a genre of videos that intentionally trigger ASMR by combining gestures and soft sounds to induce pleasurable sensations. In this clip, a woman’s hand glides over a block of moldable sand with a large knife for one hour. The soundscape is gentle, and the video is filmed in one meditative, extended shot. I often watch ASMR videos to relieve stress. In general, I love the earnestness of the ASMR community on YouTube. It’s a friendly place where people calm each other by slicing soap, cutting hair, or seductively whispering.

Huge waves crash against swaying North Sea oil rig. This brief clip was filmed and uploaded online by James Eaton, a worker on offshore drilling platform between Norway and Scotland. He is looking at a neighboring rig that lurches dangerously as it is battered by waves. I first saw the video in 2015, when it went viral. It is a chilling illustration of cause and effect: by extracting energy from the earth’s interior, we heat up its surface and create conditions for more extreme storms.

Girl Water Diviner (1954). Water witching—also known as dowsing—is an ancient, global practice in which people claim to locate ground water or buried ores with magic rather than scientific instruments. On YouTube, there are dozens of dowsing videos from around the world. This short newsreel, from the archives of broadcasting company British Pathé, shows Catherine Bent, a Cornwall-based water diviner who gesticulates and trembles as she supposedly responds to traces of underground water. I’ve been researching Bent’s life and it pleases me to see footage showing that she truly believed in her powers.

Tumbleweed Dust Devil! This short clip, shot through a car windshield on a mobile phone, shows hundreds of tumbleweeds cruising down a remote road, driven by strong winds. Growing up in Texas, I spent a lot of time zoning out to country radio while staring into long expanses of nothing, like the landscape depicted here. So I find this video evocative of those memories. It’s also interesting from a biological perspective. Even though uprooted tumbleweeds are inanimate, dead things, they are in fact fulfilling an evolutionary prerogative, roaming distances to disperse their seeds.