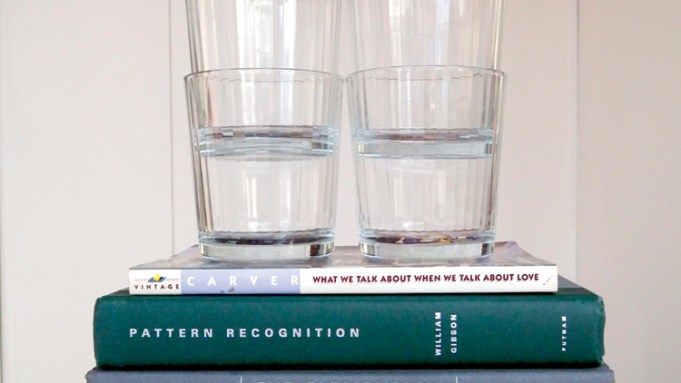 Heman Chong’s paintings, installations, and performances are informed by literature and infused with an encyclopedic impulse to catalogue knowledge.

Among those who don’t write, it is perhaps difficult to fathom the important role that not-writing plays in writing. Gertrude Stein famously quipped that in order to be a writer, one must have lots of time at one’s disposal to do nothing. Given the dominant role that introspection plays in every creative process—especially one that is in many ways a direct transmission of mind—such activities as reading, traveling to foreign lands, taking long walks, and staring into space should be understood as playing an equal, if not more important, role as actually putting words down on paper. We might go so far as to say that with regard to writing, there is no such thing as procrastination; indeed, procrastination, not–writing, is the very essence of writing.

Based in Singapore, Heman Chong is an artist for whom fiction writing plays a vital role. Or else he is a fiction writer for whom art-making plays a vital role. I don’t think Chong would debate either characterization. As he said in an interview, “A lot of my visual work revolves around the act of writing, the product of writing, the circumstance of writing.” 1 Mostly, however, his work stems from his fears and anxieties surrounding writing: that is, not-writing.

Evidence is ample throughout the extensive and highly diverse oeuvre he has produced over the past two decades. Begun in 2009, “Cover (Versions)” is an ongoing series of paintings of book covers, currently numbering in the hundreds. The books, most of them novels, are denoted by title and author; the rest of the design is wholly Chong’s, rendered in styles ranging from geometric abstraction to abstract expressionism.

Often, the chosen title is a book Chong has not yet read but intends to. Thus, he is not trying to express somehow the inner contents, the essence of the book, through abstraction. The covers are speculative, while also reflecting, to a lesser extent, Chong’s training as a graphic designer. Regarding the seriality of the series, Chong insists that painting is a mechanical activity for him—something he does in the studio automatically when he can’t think of anything better to do.

The inherent bibliophilia of the “Cover” series was reprised in a more recent project for his 2016 solo exhibition at the Rockbund Art Museum in Shanghai. 2 This work was made in collaboration with lawyer and speculative fiction writer Ken Liu, whom Chong invited to compile a list of books relating in some way to “the law,” giving Liu free interpretation. Based on Liu’s list, Chong opened a functioning bookshop in the lobby of the museum. Legal Bookshop (Shanghai) was stocked wholly with titles suggested by Liu, ranging from textbooks for first year law students to John Grisham novels, all of them for sale in place of the art books on offer in the standard museum store. When questioned about the intention behind the project at a public panel discussion shortly after the opening in Shanghai, Chong responded that he was always interested in law, but it was an area with which he had been largely unfamiliar as a young student growing up in Singapore. As an adult he reflected: Why hadn’t anyone ever taught him what his rights were as a citizen? Why are mathematics and history considered vital educational subjects, while law is completely neglected, except for those who wish to go on to become lawyers?

“All art is documentation,” Chong is fond of saying, and much of Chong’s work documents his inquisitive curiosity surrounding branches of knowledge and literature that are unknown to him. Chong is an artist who wants to know everything—even though he is aware that such a feat is impossible, he still allows himself to entertain the possibility. The internet is an engine that allows us to know more and more, and at a faster pace than ever before. Baidu Baike is a Chinese-language website similar to Wikipedia: an encyclopedia of everything, chock-full of links. Everything (Baike), 2016, is a performance that ran for the duration of Chong’s exhibition at the Rockbund in the museum’s top-floor cafe, where a miked performer in a glassed-in stage continuously read aloud entries from Baidu Baike during opening hours. After reading to the end of a given entry, he or she clicked on the fifth link embedded in the page to move on to the next. (The number five was chosen randomly by the artist.) The performance was a literalization of the internet’s web of everythingness and the journey of knowledge one can take by surfing that web.

Chong avers that his two favorite artists are On Kawara and Felix Gonzalez-Torres, and it is easy to see how he shares with both artists an obsession with seriality, with amassing tons of stuff. Chong left empty the Rockbund’s largest gallery, save for stacks of folded newspapers, ten thousand in all, whose pages turned out to be blank. Endless (Nights), this anti-monumental sculpture, contained an invitation to audience members to take a copy and do whatever they wanted with it. Chong figured that, much like one of Gonzalez-Torres’s amalgams of candy, the work would simply disappear gradually over the course of the exhibition. Instead, many museum visitors used the paper to create their own works of art—paper airplanes, mini-sculptures—or else they tore the paper into shreds, perhaps as a means of letting out inner tensions. Within days, the formerly pristine room was trashed with paper remnants, resembling the chaos of a messy artist’s studio. Given the artist’s predilection for collaboration, the outcome, though unexpected, was not wholly unwelcome.

Another large-scale scatter work, Monument to the people we’ve conveniently forgotten (I hate you), 2008, formed the centerpiece of Chong’s exhibition at South London Gallery in 2016. The installation, consisting of a million blacked-out business cards, filled the floor of the entire main gallery of the exhibition space. Every viewer is bound to have a different interpretation of the piece, depending on one’s perspective on interpersonal contact, as it is conventionally constituted. For many (as the first part of the title seems to indicate), the business card serves as an excuse to delete a physical person from the hard drive of our memory after meeting him or her. Whether stored in our pocket or stashed away in a file somewhere, the card functions as the physical substitute for that person, to be used only when it becomes necessary, or when we accidentally stumble upon it again—a chance that has been negated by Chong’s nihilistic act of blacking out the cards. Alternately, the work could be considered a reflection on the last gasp of our reliance on paper objects to remind us of contacts, as one can expect that business cards will soon be relegated to the dustbin of history, thanks to the advent of digital communications.

Actually, paper and printed matter play a central role throughout Chong’s oeuvre, whether in the form of newspapers, business cards, or the raw stuff of books. (A master of art world networking, Chong initiated a collaboratively written novel, Philip, and has coedited anthologies of short stories written by himself and fellow artist-writers, including Nadim Abbas, Francis McKee, Hu Fang, Binna Choi, Russell Storer, Rodney Latourelle, Joselina Cruz, Rosemary Heather, David Reinfurt, and, well, me.) Yet another serial project, Calendars (2020–2096), 2004–10, shown in a 2015 solo exhibition at Wilkinson Gallery in London, comprises 1,001 pages from a future wall calendar, roughly one for each month of the years named in the title. Each page contains a photograph of a different locale in Singapore, ranging from office interiors to parks, with the sole unifying factor being that they are all eerily devoid of people. Like the number five in the Everything (Baike) performance, the dates were chosen arbitrarily. The futuristic setting (Parts of Singapore today can look like something out of a science fiction movie) and the blunt seriality of the photos together form a bizarre new sensation, one of future nostalgia—memorialization in advance. Who knows if any of these places will still exist on the dates specified by the calendars. But whoever’s eyes are still around to rest upon these photos in the future might reflect back on a world that once was, a world we (or more precisely, the denizens of Singapore) currently occupy, one that may appear more precious now given its vulnerability to the myriad dangers created by mankind.

Often the titles Chong chooses rival the actual content of his work in terms of pure potency. Monument to the people we’ve conveniently forgotten (I hate you) at first endows one with a sense of sadness and loss—similar to the sense of memorialization one experiences when looking at Calendars installed one after another on a gallery’s walls—before the title of the business card piece is capped off by a sting of misanthropy conveyed by the parenthetical ending. This is where Chong’s work ultimately returns, every time: to language, its potentialities, and its failures to truly convey, to carry forth meaning. Like other art writers, Chong is just as concerned with titling as he is with content and concept: his titles are meant to serve as stand-alone objects—not merely referents to the content or concept. Chong wants to write the work, not write about the work. This is why, after writing all these words about an artist I admire so much, I have to conclude that the work speaks best for itself, as can be readily attested by an example from yet another of Chong’s ongoing series, “Stacks.” These pieces are all title, consisting as they do of stacks of books from the artist’s personal collection, whose titles form short poems, like the following:

Everyday Life in the Modern World

What is the artist’s role today?

This Luxe, Pininfarina-Designed Train Will Take You Through Switzerland’s Breathtaking Landscapes