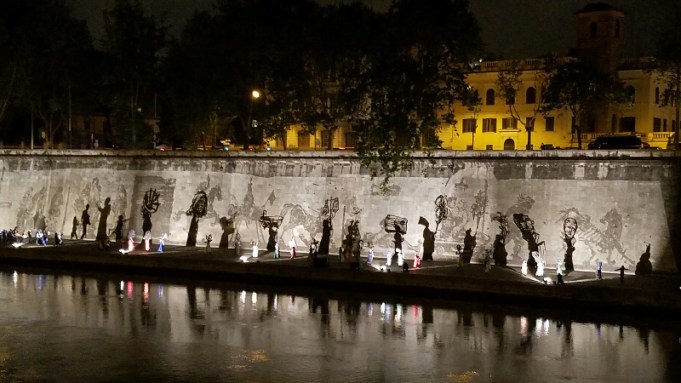 Rome has been waiting for contemporary works of public art that can stand up to the historic city’s glorious monuments from the Renaissance and antiquity. Where the architects Richard Meier and Zaha Hadid tried, and failed in the opinion of many, with their new freestanding buildings, South African artist William Kentridge has now succeeded with Triumphs and Laments: A Project for Rome, his grand frieze along the Tiber embankment, which debuted April 21 with a concert by Kentridge and composer Philip Miller, his longtime collaborator.

Eighty colossal Kentridge figures are imprinted on 1,804 feet of waterfront in the very heart of Rome. By a process called “reverse graffiti,” some of the embankment’s accumulated grime was covered with plastic stencils while the complete wall was power washed. The resulting lineup of 30-foot Romans trudge and sway along the river with the authority of movement that is one of the artist’s trademarks: horsemen, charioteers, generals, popes, martyrs, refugees. Kentridge compares it to “Trajan’s Column unrolled.”

Around 3,000 people showed up for the launch celebration, Rome’s official 2,769th birthday. Standing on the embankment, leaning from the bridges, the crowd was mesmerized by the spectacle staged by Kentridge, who is a director of opera and theater among many other things. The event was performed by one hundred volunteers and professionals, and had been announced everywhere simply as a party “on the riverbank at nightfall.” Lights along the water’s edge illuminated a procession of two groups of marching bands, singers, dancers, and standard-bearers, throwing their gyrating shadows up against the monumental figures of the frieze. The performers approached from opposite ends of the embankment, merged in a rousing crescendo of music and movement, and passed one another on their way into history.

Some in the audience puzzled over which group represented “Triumphs” and which “Laments,” as described in the handouts, but it hardly mattered, such was the magic at work. Even Rome’s weather gods were on the side of Kentridge that night, delaying the rainstorm predicted to spoil the party.

The triumph of “Triumphs” is an instance of the right artist in the right place at the right time. Roman friends confided that they had never before been so depressed about their city, currently without a mayor, and believed it needed some spectacular art to lift the public spirits. With Kentridge’s unimpeachable standing, artistically and politically, he was seen as the man to deliver, and he did. April 17 through 24 was designated “Kentridge Week” with the artist seeming to be speaking and appearing everywhere at once, and an exhibition of the Tiber drawings on view at Museo d’Arte Contemporanea di Roma  through October 2. Fueling the celebratory fever was the enthusiasm of the project’s huge number of volunteers, plus the fact that the project cost the public nothing. Italian press cited an €800,000 budget from foundation and corporate financing, as well as a deftly publicized Kickstarter campaign.

Billed as the artist’s largest endeavor to date, the piece’s charm is that it has pomp without bombast. Unlike Christo’s public-art works, a comparison on every tongue, Triumphs and Laments does not impose an individual artist’s personal vision on a historic setting, but enters seamlessly into it.

Fourteen years ago, a New York artist on a Fulbright in Rome, Kristin Jones, had a revelation: the section of the Tiber between the bridges the Ponte Sisto and Ponte Mazzini, the only perfectly straight stretch of the river, had the same dimensions as the Circus Maximus, and was destined likewise to be a place of public entertainment. Jones’s measurements have been questioned by many of the architecture pedants who inhabit Rome, but nobody, now, disputes that hers was a corking idea. Jones waged a mainly one-woman campaign to make the river a performance venue until 2005, when supporters joined her to form Tevereterno. The arts non-profit now holds a 19-year lease on what they have renamed Piazza Tevere. There have been temporary projects on the spot by Jones herself and such artists as Kiki Smith and Jenny Holzer. But it took William Kentridge, with the support complex he had at his command, to bring the concept to fruition in a grand Roman manner.

Kentridge is a showman with an unfailing grasp of scale. He knew how to take literally Jones’s concept of the Tiber as a natural theater. The west, Trastevere, bank was his stage, and the opposite bank the audience. His shadow play worked against the backdrop of colossal figures from Roman history. The embankment acoustics amplified Philip Miller and co-composer Thuthuka Sibisi’s original score, which combines African chants, Italian Renaissance madrigals on themes from Exodus, and quotations from Rilke.

But whose history is being told here? The literal “triumph” of antiquity was a military hero’s procession, embellished, in Caesar’s famous case, with a phalanx of elephants holding torches in their trunks. Kentridge preempts narrow interpretation of his title, saying, “Every triumph and glory is someone else’s lament and shamefulness.” History and movement are the staples of Kentridge’s work, and several of its underlying metaphors—the march of time, the march of history, military marches, the march of displaced peoples—are embodied in the Rome frieze. The parallels with the terrors of our time, in particular the sufferings of refugees and religious conflict, are self-evident and moving.

Kentridge selected the eighty real-life characters in the frieze from a database of five hundred images assembled by historian Lila Yawn. Some critics complain they are hard to identify. Recognizable from their garb are soldiers, popes, kings, and philosophers, and refugees clutching menorahs and sewing machines. The film stars Anita Ekberg and Marcello Mastroianni (“Triumphs”) and the murdered Pasolini and Aldo Moro (“Laments,” surely), based on iconic news photos, speak to a present-day audience. But who are we to impose our own knowledge base on 2,769 years of history? One benefit of the frieze may be to send viewers running to their history books, i.e., their smartphones (I admit to blanking out over Arnold of Brescia and, more shamefully, the death of Remus) or the glossary app being prepared by Tevereterno. Thankfully, the riverbank itself is free of signage.

While the art press was hailing Kentridge as today’s Michelangelo, others see his project as a sorely needed catalyst for finally cleaning up Rome’s riverfront. Walking in Rome, it is indeed baffling to encounter the Tiber, a sinister canyon of debris in the midst of chic neighborhoods. At a Kentridge Week gathering at the Cascianelli bookshop off Piazza Navona, architect and historian Tom Rankin, a twenty-year resident of Rome and a director of Tevereterno, explained that its flooding had been a fact of life since ancient times, but became an embarrassment to the newly unified Italy of the mid-nineteenth century. “They put up these forty-foot walls, said Rankin, “but with poor planning, sealing off the river.” The present ghost river is an insult to historical truth. Along with its fountains and aqueducts, the Tiber should be a prominent physical symbol of the water whose remarkable natural abundance made the glory of Rome possible. In this city without skyscrapers or freeway interchanges, the curving roadway formed by the Tiber is its largest infrastructure landmark.

Will the Kentridge murals, which will degrade into nothingness after six years, change the fate of the riverfront? International urbanists see a model for success in New York’s High Line. “It is simply efficient,” said Rankin, “to restore a piece of infrastructure that already exists and can easily take pedestrians and cyclists to key points in the city.” World-weary Romans point to conservative tastes and civic apathy. They give the example of an official who was ready to block the Kentridge frieze because it is contemporary art.

Walking back toward the Pantheon after the opening concert, arts television producer Paolo Giaccio, a Rome native, observed he had seen every type of person in the audience on the riverbank. “We are Romans, so we are cynical,” he said. “But if we saw this project anywhere else in the world we would agree it was fantastic.”

Hurry, These Sandisk SSD Drives Are 57% Off for a Little While Longer