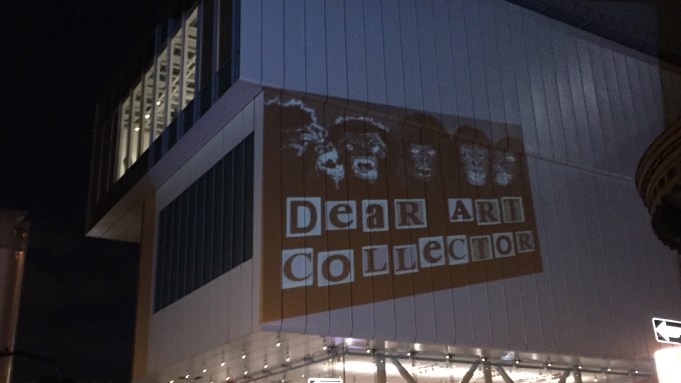 In 1988, decades before the ironic listicle became ubiquitous, a street poster titled “The Advantages of Being a Woman Artist” hit the art world by storm. It was penned the Guerrilla Girls, an anonymous group of feminist activists formed three years earlier, who shielded their identity under masks and pseudonyms of deceased female artists like Frida Kahlo and Kathe Kollwitz (both of whom are still active in the group today).

The blistering 13-point screed outlined “perks” for female artists, such as “not having to be in shows with men,” “having an escape from the art world in your 4 free-lance jobs” and “having the opportunity to choose between career and motherhood.” Though it wasn’t the Guerrilla Girls’ first tract, it’s arguably their best known. Its rhetorical strength comes from abandoning the Girls’ earlier statistical formula—disseminating facts and figures of art world gender-based discrimination—for generalized complaints about the plight of female creatives. The “Advantage” statements, which embrace the paradoxes of feminism’s victories and failures, still resonate deeply. More than 25 years later, the list has traveled the globe on fliers, t-shirts and many other items. (It has even been parodied, which some would say is its own measure of success, by the collective Ridykeulous.)

This month, the Guerrilla Girls turn 30. The masked avengers—who have had more than 60 members over the last three decades—celebrate their birthday with new campaigns, street actions and an exhibition through May 17 at Abrons Arts Center on the Lower East Side, where they will host a party tonight. The exhibition, “Not Ready to Make Nice, 30 Years and Still Counting,” uses the interior and exterior of Abrons’s gallery space, just blocks from the NADA art fair, to present a comprehensive timeline of the collective’s actions. A sequence of posters and related ephemera, presented in chronological order, illustrate the continuity of the group’s humor and aesthetic, even as their concerns have changed along as the feminist movement has become more attuned to intersectionality.

In 1985, the Guerrilla Girls entered the fray of what they deemed a “very conservative art world” buoyed by an expanding market and undergirded by the heady debates of postmodernism. The collective reacted with political directness, going straight for the art world’s jugular with their brand of agit prop. Their debut poster still seems gutsy today. “What do these artists all have in common?” a line at the top of the page in boldface asks. A list of more than 40 successful male artists of the mid 1980s follows, including Francesco Clemente, Dan Flavin and Keith Haring. “They allow their work to be shown in galleries that show no more than 10% women or none at all,” the poster answers at the bottom, in smaller capital letters.

But the collective’s criticisms didn’t only focus on galleries. In their first year, the Girls created tallied lists of critics who didn’t write enough about women artists (including, at the time, Roberta Smith), and the amount of solo exhibitions of women at four major New York museums (one at the Museum of Modern Art, and none at the Guggenheim, Metropolitan or Whitney). The Girls also quickly began keeping tabs on the representation of artists of color, as well as the hypocrisies of corporate sponsorship.

In the beginning, the Guerrilla Girls said, their target was tokenism. As the feminist debate shifted focus, however, so did their campaigns. The 1990s saw the collective address such themes as the restriction of women’s rights in Saudi Arabia during the Gulf War, the South Central Los Angeles riots and abortion rights. Over the last few years, the Girls have raised consciousness about the gender disparity in artistic production in places like Turkey and Ireland. (Early on they acknowledged the relative progressivism of the U.S.; a poster from 1986 stated simply “It’s Even Worse in Europe.”) They’ve also created signage about warmongering politicians, the marriage-equality debate, and gender inequality in industries like tech, film and music.

For their 30th anniversary the collective returns to its roots with a new stickering campaign. They have updated the tallies of women represented by major commercial galleries and women granted solo exhibitions in museums; their new stickers juxtapose the 1985 and 2014 totals. Incredibly, the four major New York museums they included in their 1985 survey fare only slightly better 30 years later. MoMA presented two solo shows by women last year, while the other three institutions (the Met, Guggenheim and Whitney) hosted only one each. As for commercial galleries, the Girls now count the spaces that show less than 20% women, as opposed to the 1985 figure of 10%. As astonishing as the museum tallies, there are repeat offenders, such as Mary Boone, and newcomers, like Metro Pictures (who represent Cindy Sherman.)

The collective also targets inequality between the rich and the poor, with new stickers directed to galleries, museums and collectors. “Art is sooo expensive! Even for billionaires!” reads the text addressed to megapatrons. “We completely understand why you can’t pay your employees a living wage.” Similar texts denounce museums and galleries for paying workers subpar wages.

The Girls have led charges to disseminate their information. On May 3, a group of approximately 15 volunteers, myself included, strolled through Chelsea to distribute stickers. Most passersby were glad to chat with the Girls, stopping to take pictures or introduce their children. A professor from Rutgers even used the opportunity to educate her undergrads about feminist activism. But some people still received the message coldly, particularly workers in the galleries called out for showing less than 20% women. And in a brief but ugly encounter a man on the street, identifying himself as a “Chelsea resident,” harassed the Girls for destroying private property in support of “their little cause.”

That night the Guerrilla Girls teamed up with the Illuminator collective, a team of rag-tag activists that create projections from a cargo van, to spread their message. The text addressed to collectors was projected (unauthorized) that night, first on a space above the Empire Diner on Tenth Avenue in Chelsea, then on the façade of the new Whitney Museum while the museum was still open to the public. The Whitney, for its part, did not comment on the intrusion. I wondered if that was because the Guerrilla Girls’ campaign targeted a systematic problem instead of specific individuals. I also wondered if their critique was becoming soft.

When reached for comment, the Girls explained, “White males make almost all the money. Women and artists of color are here, empowered, and have all the skills and talent necessary. It’s the institutions and the powers behind them that must change.” They added, “Everything that’s wrong with income inequality in the art world is also wrong with income inequality in the U.S. as a whole. We’re targeting both in our new sticker campaign.”

In a way, the Guerrilla Girls are returning to the tactics that made them, if not a household name, a legitimate art world presence. It is this plainspokenness that has solidified their importance. That said, there are elements of the Abrons show that seem dated or techno-phobic. For instance, a banner titled Disturbing the Peace, first shown in Montreal in 2009, features misogynist quotes from “thinkers” spanning ancient Greek philosophers to Rush Limbaugh, printed in a faux-graffiti text. Both graphically and philosophically, the work feels distant and stale.

What is perhaps more enduring is the way that the Guerrilla Girls’ tactics have assumed new life in the age of social media, with the Girls’ digital footprint growing daily on Instagram and Twitter. They preceded the splinter group Guerrilla Girls BroadBand, an offshoot of the GGs formed in 2001 to work on digital activism projects, who are showing work at the Bruce High Quality Foundation University Gallery through June 14. The BroadBanders’ activities on-site at BHQFU will address non-art world topics like campus rape, abortion access and the punk band Pussy Riot.

The collective’s influence can also be traced in activist efforts like Micol Hebron’s “Gallery Tally Project” and Women’s Inc. Hebron’s project engages artists in a new campaign to count representation of women, and Women’s Inc., a group founded by young feminist artists and artworkers in a secret Facebook group, has created a riotously funny lexicon of portmanteaux poking fun at the art world’s continued, pervasive sexism.

By placing the Guerrilla Girls historically in a context that straddles art and activism, this 30th anniversary presentation shows that their brand of institutional critique can still reside in an edgy position. These Girls continue to ride a line between art world co-optation and cannibalization that many jaded young artists consider a relic of the past. Despite their proximity to the NADA fair, the Guerrilla Girls’ show of strident politics and cheap photocopies could be considered an antidote to the slick commercial professionalism of even downtown galleries. And that, in itself, is cause for a celebration.