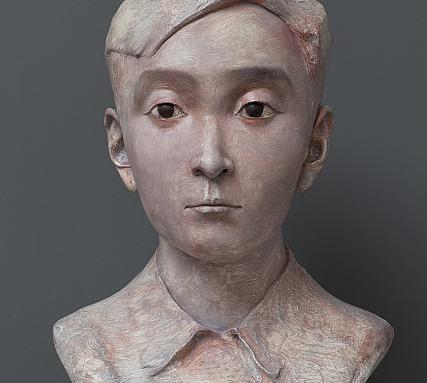 Zhang Xiaogang, for over two decades China’s most critically celebrated and highest earning contemporary oil painter, is about to reveal a surprise move into sculpture. Opening Mar. 28 at two Pace Gallery locations in Chelsea (508 and 510 West 25th Street; through Apr. 27), his solo will include four new canvases depicting—in his usual large-scale, deadpan style—the type of domestic scenes and objects for which he is famous.

More startling, however, will be the numerous sculptural heads and busts—ranging in height from six inches to five feet—that for the first time translate into three dimensions many characters of the sort seen in his “Bloodlines—Big Family” portrait series.

Begun three years ago at Zhang’s rambling studio in Beijing, the series was cast in bronze in the U.S. and painted white before the artist began the final, and unprecedented, task of painting the surfaces of the slightly stylized personages (ranging from babies to young adults) to resemble traditional Chinese ceramics or, in some cases, glazed polychrome figures from the Tang dynasty.

This is less peculiar than it sounds, he explained, when one takes into account the paradoxical nature of space in traditional Chinese painting. In that visual system, flatness can simultaneously contain great depth—encompassing distance, time and the eternal recurrence (and thus permanence) of change. In the minds of trained ink-painting viewers, two dimensions easily oscillate with three.

Western critics have always been a bit surprised by Zhang—especially the seemingly universal appeal of his doe-eyed family groups, in which the blank expressions of parents are often offset by the peculiarly adult, subtly inward-looking faces of babies and children.

The short answer to this conundrum is that your family, too, might look a little stunned—yet at the same time deeply thoughtful—if it had just lived through the Cultural Revolution, Mao’s 10-year campaign (1966-76) to break virtually all bonds with China’s cultural past and to establish a socialist utopia through brutal egalitarianism.

Although that nightmare ended 37 years ago, it remains a fixture in Zhang’s imagination. Born in Yunnan Province (which borders Vietnam, Laos and Burma) in 1958, he was an elementary schoolboy when his parents, both minor government officials in the city of Kunming, were forced to leave him (along with a trio of brothers) and enter a reeducation camp for three years.

Zhang himself was sent to learn the virtues of farm labor at the age of 14. When China’s universities finally reopened in 1977, he was admitted to the Sichuan Institute of Fine Arts in Chongqing, revered for its painting courses, where Socialist Realism still dominated the official curriculum.

Excluded from teaching positions due to his nonconformist attitude and work, Zhang did odd jobs in Kunming and was eventually hospitalized from heavy drinking, finding among his fellow patients another source for the ghostly presences he would later depict.

With China’s official Opening Up and the advent of the progressive ’85 New Wave art movement, Zhang regained his personal and artistic bearings, participating in the landmark “China/Avant-Garde” exhibition at the National Art Museum of China in 1989, the internationally touring “China’s New Art Post-1989” in 1993 and the Venice Biennale in 1995. Thereafter his career rise was meteoric.

Zhang’s signature family-group motif, adopted in the early 1990s, was reportedly triggered by his discovery of a photograph of his mother as a young woman, before she became mentally unstable. The find was lucky on several counts. Innumerable mementos of this sort had been destroyed during the Cultural Revolution, either by rampaging Red Guards or by family members fearful of being found guilty of bourgeois sentimentality or, worse, dangerous links with individuals in political disfavor.