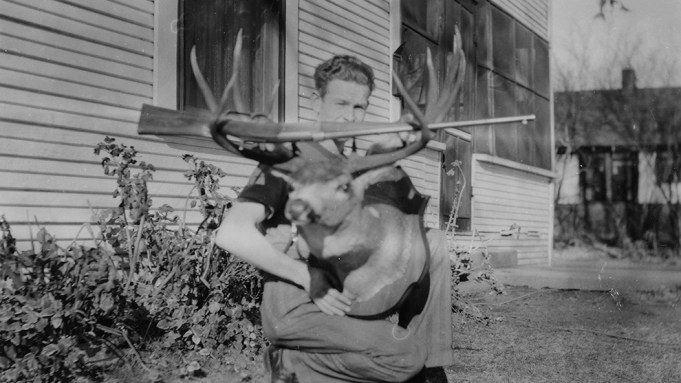 Along with her partner, the photographer Ed Panar, Melissa Catanese runs Spaces Corners, a photo book store in Pittsburgh. The store is small, and only open on Saturdays and by appointment, but along with Dashwood Books in New York, and Photo Eye in Santa Fe, it’s one of the more influential and important photo book stores in the country. “We stock books that we’d want to have on our own personal shelves. We’re interested in work that comes out of the world,” Catanese says. By that she means not documentary photography, but books that show a personal way of seeing reality—pictures of the world as seen through one set of eyes at any given moment, a stylistic lineage that could be traced back to Eugène Atget, Walker Evans, and Henri Cartier-Bresson. Catanese would take it even further: “I think it goes back even to the first photograph,” she says.

An artist herself, Catanese’s most recent book is Hells Hollow Fallen Monarch. Edited down from Peter J. Cohen’s largely anonymous collection of over fifty thousand amateur snapshots, Hells Hollow presents a strange, literary, and fragmented narrative that follows deer hunters in the woods of Pennsylvania. Catanese has worked with Cohen since 2009, and she’s one of several people who has culled from his collection to produce individual projects. The practice of entering an archive and editing images into a recontextualized sequence puts Catanese in conversation with Larry Sultan and Mike Mandel’s masterful Evidence (1977), a book that the two photographers made out of the archives of dozens of corporations, research institutions, and public agencies. Catanese’s practice, combined with the fact that she acquires for Spaces Corners, puts her in a unique position to talk about the current state of photo books. We talked via Skype, a few days after Catanese had made the drive from Austin, where she was teaching, to her home in Pittsburgh.

HAYDEN BENNETT I walked into Dashwood the other day with a friend who doesn’t know photo books, and his response was, “I don’t know where to start. I don’t know what to do. There’s everything, everywhere.” What would you say to that person?

MELISSA CATANESE Even though so many photographers are making photo books, it’s a still small, specific genre. To someone who isn’t part of that, I think it can be daunting and overwhelming. I’d probably ask, “What are you interested in? Are you interested more in landscapes? In social studies? People from different cultures? Are you interested in something poetic and literary?”

BENNETT You have divisions on your site—puzzles, dreams, nonhuman—to break down photo books into categories. Is it for that reason?

CATANESE Yeah. It’s to make things more fun and accessible to those who may be like, “What is this?” There is some insider baseball element to what we do, but we try to keep it light and playful.

BENNETT Do you see a relationship between your work and film?

CATANESE I take a lot of inspiration from movies, yeah. Inevitably what inspires you seeps into your work. I’m sure I’m among many photographers out there who are inspired by Tarkovsky and David Lynch and more cyclical atmospheric works.

BENNETT Lynch tends to build worlds with their own interior logic. That happens in your books, and a lot of photo books.

CATANESE It’s something that unconsciously occurs when you’re creating. Your own personal context inevitably is in the work.

BENNETT Hells Hollow works that way—how did it start?

CATANESE I was looking through Peter’s archive, and he had some images of people hunting that reminded me of work by the photographer Les Krims, whose projects tend to have implied narratives. Often with Peter I’ll see one thing in the collection and I’ll set it aside and express my interest in it. He’ll start building more of what I set aside.

Hells Hollow was really an exercise in editing for me, and sequencing. Aside from the content, a lot of it had to do with structure, and creating separate chapters. There’s a transformation in that book from the hunter to the hunted and the observer. It kind of blurs the line whether you’re the animal or the human or the tree.

BENNETT It sounds like you start from finding an image in the collection and want to dig deeper into what you see.

CATANESE Yeah, and then all of a sudden Peter has hundreds of images of people with deer, and children with deer. It becomes more of a whittling process. I began to realize what to leave out. The project does get very specific, even though the collection grew within Peter’s style, which is collecting anything and everything.

BENNETT I want to talk about sequencing—it’s so important to your work, and really to almost any photo book. Sequencing often makes it seem like there’s a message—not one you can put into words, necessarily—but like in the decision-making process there’s something being said from image to image.

CATANESE: Oh totally. I think sequencing is the heart—the guts—of a photo book. It’s what carries along that message that you’re talking about. I think of sequencing as this invisible scaffolding that you don’t really notice when it’s doing its job. It’s a core element of building a loose narrative.

BENNETT John Gossage’s book The Pond (1985) made me start thinking about photo books as walks—partially just because Gossage goes on a lot of walks, in this case taking pictures of what he saw as he walked around and away from a pond at the edge of a city in Maryland—but it got me thinking that you could impose the idea of photo books as a walk through any type of territory, even if it’s completely fragmented or psychological.

BENNETT You’ve made a couple photo books by a fictional character, pooling together your work with a few other photographers. You and Ed Panar made Lester Pleasant. Alec Soth also has a Lester.

CATANESE Our Lester came first, I’ll have you know. Our Lester was before Lester B. Morrison.

BENNETT How did your Lester come about?

CATANESE Lester Pleasant appeared in graduate school—it was a response to a lot of our frustrations with school. For me, the most profound part of the process of creating this fictitious character was a loss of ego.

BENNETT Even on Lester Pleasant’s website, the names of authors aren’t listed. The project isn’t explained in his books. To me Pleasant seems more like a collective heteronym—one of the imaginary characters adopted by the Portuguese writer Fernando Pessoa to write in new styles—than a pseudonym. The actual content changes, right?

CATANESE Lester’s work has a stronger sense of absurdity than my personal work; there’s less melancholy. Though stylistically, Lester uses a snapshot aesthetic that’s not much different than the individual style of the people who pool together their work to make books by Lester.

BENNETT Did you critique him?

CATANESE No, Lester was kind of underground. In retrospect, we probably should have brought him to crits, but we weren’t taking Lester that seriously. What came out of it was being able to pool all of our photographs together. It was more about the images and less about the creator. Lester really did come alive.

BENNETT What do you get out of teaching now?

CATANESE There’s something about the mode of being a student, and the rigor—that I think is really intense. As a teacher you carry that along with you after every session that you have.

BENNETT It makes me think of what Stephen Shore said about how teaching helped him articulate verbally what he’d just been doing visually. You might have your own practice, but so often you’re alone and not verbalizing anything.

CATANESE I love that. I did an exercise related to what Shore said with some of my classes this past year at the University of Texas. I timed students for a few minutes as they talked about what they saw in other students’ images. Just content. That’s it. I think Stephen Shore gets at it in The Nature of Photographs.

BENNETT Is it to help the maker of the image see what others can see?

CATANESE A lot of the time we’re all seeing something different. I’m reminded of the Lee Friedlander quote about photography being a generous medium. He says, “I only wanted Uncle Vern standing by his new car (a Hudson) on a clear day. I got him and the car. I also got a bit of Aunt Mary’s laundry, and Beau Jack, the dog, peeing on a fence, and a row of potted tuberous begonias on the porch and 78 trees and a million pebbles in the driveway and more. It’s a generous medium, photography.” Ultimately it got them thinking about their control. The control that they have in being able to direct an image, but also what they can’t control.

CATANESE It’s looking at the world as it is.