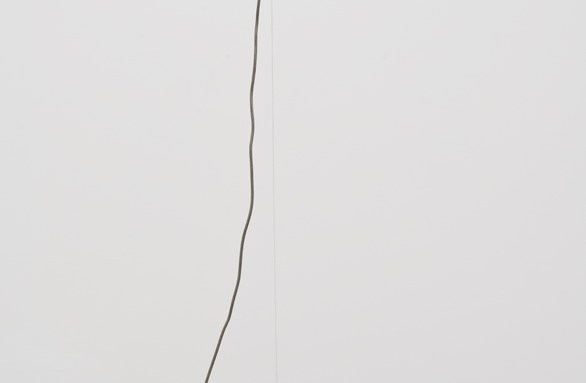 Works by Mexico City-based artist Abraham Cruzvillegas behave like magnetic open systems. This year, as part of dOCUMENTA 13, the artist developed a public project involving a game of pick-up sticks, with which he devised a series of activities. Based on its chance system, Cruzvillegas recruited people, objects, and his own body to form social sculptures (picnics, walks, or games in the street), which passersby were asked to capture on their mobile phones.

Best known for his “Autoconstrucción” series, Cruzvillegas often lends use-value to the castoff by calling attention to reclaimed or neglected materials. His 2009 film of the same title documented impromptu architecture in his native Ajusco, Mexico, picturing scores of improbable homes made of detritus recycled to suit residents’ needs. The film, whose title translates to “self-building,” describes the assembly of bricolage structures as a community’s means of identity formation.

Self-destruction is a corresponding operation in “Autodestrucción 1,” the artist’s first exhibition at Regen Projects, Los Angeles [through Dec. 22]. A short story written by Cruzvillegas about his musician uncle Miguel Prado frames the exhibition. Prado was a self-styled Pachuco who traveled from Mexico to San Francisco and Paris as a trumpeter during the Zoot Suit and Zazou heydays of the 1930s. Told from the point of view of Prado’s instrument, the story provides imagery and stylistic grounding for Cruzvillegas’s 12 sculptures: serpentine structures in rebar that support rhythmically hung strips of gaudy fabric and metal chains, all interspersed with feathers and dried meat.

PAUL SOTO The title of the exhibition signals a U-turn in your work. Until now, your overall project has been titled “Autoconstrucción,” whereas the show in Los Angeles is called “Autodestrucción.” Could you explain this shift?

ABRAHAM CRUZVILLEGAS This exhibition is the first of a series of projects that I will entitle “Autodestrucción,” which will approach diverse ways of making things your own-not erasing individual identity, but the opposite. I wanted to show how “Internationalism” or “Style” is something that is to be appropriated, customized, modified, adapted and even destroyed, according to specific, local, individual, subjective needs.

SOTO That idea seems very contemporary, in light of data sharing and open sourcing on the Internet. Yet your subject matter comes from the interwar period-the exhibition moves through the lineage of the 1930s Pachucos, Zazous, and Zoot Suiters (p-Z-z). Did you have any contemporary groups in mind while you worked?

CRUZVILLEGAS Mexican punks and skinheads, in my own experience, were pretty good examples of how styles are adapted happens. This mode of appropriation changes communities, countries, and cultures. Economic clash, political contradictions, historical detours are very important for appropriation: it’s impossible to be or to appear like a British punk if you were born and grew up in Santo Domingo Coyoacán. We called ourselves phonetically ‘poonq’, not “punk,” even.

SOTO Your faint wall drawings, Autodestrucción 1-16, invoke erasure. Could you tell me how you produced these, and how they feed off of and inform the sculptural works?

CRUZVILLEGAS These are blind drawings that were made after collecting archive images from the Pachucos, Zazous and Zoot Suiters (p-Z-z) from the late 1930s to the early ’60s, when Pachuco culture faded in Mexico City, when figures like Tintan or music moved to a different style, like in the case of the band Los Xochimilcas. I filtered the pictures using a digital tool, so to make them high contrast images first, and then I took off the black blocks, leaving only the “wire contour” of them.

SOTO So they are studies and models for the rebar structures like Boogie-Woogie (handmade & sensual), among others?

CRUZVILLEGAS Right. So then I made the drawings on papers to get the stencils to be transferred onto the walls, like mural or commercial painters do. This was the first step for producing the wire sculptures using rebar from demolitions.

SOTO What subject matter inspired the materials you draped on the rebar themselves?

CRUZVILLEGAS The combination of materials in the sculptures refers to objects used by p-Z-z, like chains, feathers, and checkered clothes. I know you’ll ask me about the meat, too: meat is meat. Did you read “El Rebaje,” the story included with the exhibition?

SOTO I did. Did you have any references in mind when you structured the story around the narrative of an object? A form of surrender-to historical movement and objects-seems to characterize your version of appropriation. For example, objects and materials seem animistic and lively, and Miguel Prado, while obviously operating by his own volition, is shaped almost passively by the materials he interacts with (by alcohol’s effects, for example, or by styles of dress).

CRUZVILLEGAS I’m not an animist, but I feel close to hylozoism-the idea that all matter is alive—and I want in my dreams to become a Taoist, but I’m just on my way. When I work with objects I listen to them, they have their own dialogues in a single sculpture, but there’s also my voice. I don’t think that I, or anybody else, follow objects’ or things’ instructions, but for sure they can devour people, like fear.

SOTO How does that process relate to shifting styles and consumption by the p-Z-z?

CRUZVILLEGAS I think those forces in general are not related to this discussion.

SOTO They both seem important here in light of the global context over which you are tracking the Zoot Suit style—from Mexico City, to San Francisco, to Paris.

CRUZVILLEGAS Well, “the economy” is a thing that controls mankind’s will, but it is manmade in the end. In my opinion, lack of things or lack of money—scarcity—can bring the best and the worst out of people. The promise of consumption is something that may move us towards blind lack of will, but when you don’t understand the language of the promise of consumption, then you make your own version of style, a misfit. Then things get a voice in which we may have a dialogue.

SOTO What role does scarcity play in the exhibition, materially. Where did you find the rebar, fabric, chains, and feathers to construct the works?

CRUZVILLEGAS I used rebar from demolitions in Los Angeles in order to refer not only to the fact of destroying real architecture, but also to the economic means of recycling, which is something I do very often in my work. I use “dead” things, or materials people think as garbage, and give them a new life, a new use, by revealing instead of hiding their nature. Scarcity is also a way to understand that any material can be good for constructing, or for art making. In this case, I brought only pieces of cloth from Mexico. Most of them are remnants of castoff fabrics from stores, so they were really cheap or free. All the rest was material found in LA. There, you can see many economic contexts, like feathers from all over the US, chains from junkyards, and meat from restaurant supplies stores (properly, it’s Tasajo from the Mixtec Oaxacan people, who have settled in California for many decades).

SOTO Scarcity and enlivenment are apt terms to describe the kinds of interactions you initiated between yourself and the city of Kassel itself at dOCUMENTA this past summer.

CRUZVILLEGAS When invited to dOCUMENTA, I challenged myself to make a project without resources beyond the travel and hospitality expenses. I wanted to produce a work of art using as little money as possible, so I set my budget at zero. I went backwards by attempting to learn from the city and its inhabitants while standing on a proverbial shifting platform made out of very basic concepts taken from my practice-34 ideas written down after re-reading my notebooks, essays, and interviews, and looking at my work critically. By mining through previous writing and works, I hoped to recover all possible failures or weaknesses as being as important as my intentions, constant practices, and conventions.

I painted 34 pick-up sticks with 34 different colors, each corresponding to these concepts and intentions. I played in the streets of Kassel with the sticks by picking up all but two from the floor, and used the combination of those two concepts to make a work onsite, in the street, without an art audience. Sometimes I took pictures of my actions, sculptures or gestures, but many times I just thought of the place as a potential frame for some action that could or could not happen.

CRUZVILLEGAS Nobody saw anything, excepting some passersby; there was not much conviviality, but lots of learning. And a great thing: I had the time to visit all exhibitions, all performances, all installations, as any other person. This was an enormous learning experience. But after that, nothing from my dOCUMENTA projects will exist, much less in a gallery. It will exist in other projects as prime matter, as an extreme experience coming from my own language and vocabulary.