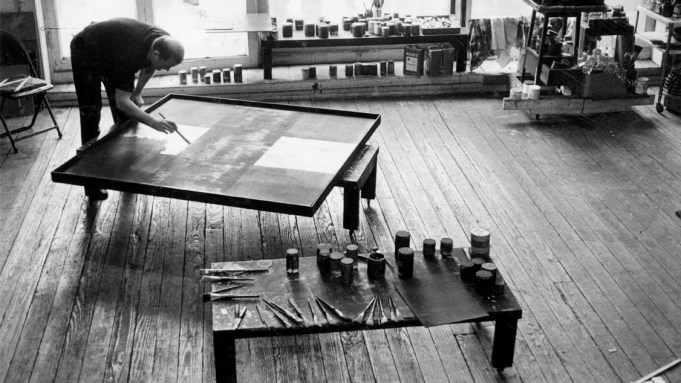 You have to wonder how Ad Reinhardt would feel about his current show, at David Zwirner’s 20th Street location in New York, with its walls and vitrines filled with several decades’ worth of the artist’s cartoons and illustrations (through Dec. 18). It’s a king’s ransom of graphic work, including the satirical, lively “How to Look at Art” series published in ARTnews, trans/formation, and other outlets between 1946 and 1961, plus humorous one-offs, drawings and personal ephemera. The breadth of selections is remarkable: From the “Museum Racing Form (1951),” with its wry look at exhibition sponsorship and prestige museum shows (the “Whitney Turf Classic” and “Carnegie Steeplechase” among them) to starkly political caricatures of Adolf Hitler from the pages of the liberal newspaper P.M., where Reinhardt was on staff from 1942 to 1947.

In addition, there are selections from among the 12,000 color slides Reinhardt made during his lifetime (1913-1967), many from travel snapshots and some from magazines and museum collections, screening in a side room. And for painting purists, there are more than a dozen of the artist’s rigorously conceptualized “ultimate” paintings—each canvas embedded with squares and cruciform shapes created from a rich palette of blacks. Together, the pictures, drawings and slides add up to a remarkable creative output. Yet showing them together, with each medium on par with the others, might well have given Reinhardt pause, since Reinhardt himself didn’t consider cartooning high art.

This provocative curatorial gesture is the work of Yale School of Art dean Robert Storr, whom Zwirner and the Reinhardt estate invited to organize this show of Reinhardt’s work on the occasion of the gallery’s taking on the representation of the estate. Via e-mail, Storr told A.i.A. what Reinhardt might think of this show and today’s market, and how the exhibition came together.

JESSICA DAWSON In your essay and in the show, you place Reinhardt’s cartoons on par with his “ultimate” paintings. He’d object to this notion, wouldn’t he? What does that say about the relationship between an artist’s intentions and our comprehension of that same work?

ROBERT STORR Painting and cartooning/caricature are separate genres and from my perspective there is no good purpose served by ranking them. In comparing apples to oranges, Goya to Piero della Francesca. Although cartooning surely falls outside of Reinhardt’s definition of “high art” and the logic of his exclusion in this regard is clear, the fact is that he practiced both art forms with complete mastery and unrivaled ambition for them. I always listen to what artists say very carefully but do not see why I should take anyone’s word on any subject as gospel so far as the import and impact of their work is concerned, although what they say can be very helpful in eliminating distracting criteria that seep in from other sources. Accepting the basic value of “No, that is not what I mean!” is different from embracing without critical qualification “This is what I mean and that’s all there is to it.” My interest in Reinhardt has much to do with the fact that he knew how to compartmentalize his practice to the benefit of every aspect of it, the better to do all of it superlatively.

DAWSON How would you characterize the tone of the cartoons versus Reinhardt’s rather polemical writing? It seems the drawings allow one to breathe a bit and not feel hammered by the ideas. Do you think he relaxed a bit when he drew?

STORR I think his writing is very funny and I think his cartoons hammer those who deserve to be hammered.

DAWSON Did the idea for the show come from you, or from Reinhardt’s daughter Anna?

STORR Anna and I have talked several times about her father’s work, and sometime during the summer I said that I was keen to work on it. I think we were both thinking along the same lines from the start and she deserves the credit for having rounded up 13 of the black squares—a real labor of love on her part—since we had started with the idea of having to make do with fewer and of fleshing out the show with several verticals, and one larger square. Only she, acting on her personal authority as Ad’s daughter and as the person now officially responsible for the estate, could have pulled it off.

DAWSON Reinhardt’s “How to Look at Art” works seem prescient, especially the bits about artists treated as thoroughbreds that fat cats put money on. Though it may be asking too much for you to speculate, what do you think Reinhardt would make of the recent auction returns?

STORR I think Ad predicted everything we now struggle with except the magnitude of the corruption and confusion in which art and artists are enmeshed. Privately he would have suffered in the present circumstances but publicly its excesses might have inspired him to pick up his pen again and he would have had us laughing—through tears and cries of pain—at the preposterous excess of it all.