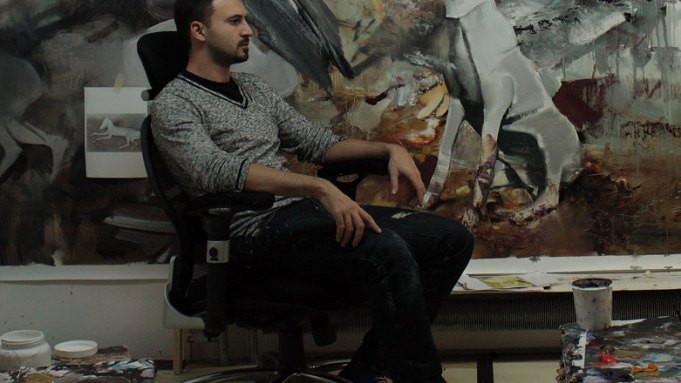 With a 2006 group exhibition, “Cluj Connection,” at Haunch of Venison in Zurich, British critic and curator Jane Neal drew a handful of young artists out of the bleak Transylvania arts scene and cast them into international limelight. Highlighting this exhibition was a figurative painter named Adrian Ghenie, whose dark compositions of urban architecture and shadowy figures, won him a solo exhibition Shadow of a Daydream at Haunch of Venison Zurich in 2007. Four years later, the 33-year-old Ghenie is London-based and preparing for a solo presentation at SMAK Ghent which opens this December. Ghenie’s virtuosic figurative painting has grown to hold court with works from the New Leipziger Schule or New British movements of contemporary painting. For his solo show, “The Hunted” at Nolan Judin Berlin, Ghenie has created a new body of work brighter in tone but decidedly darker in content.

STEPHEN RIOLO: There has been significant development in the global awareness of your work since your first solo show, “Shadow of a Daydream” (2007). Now you are preparing a presentation of new work for SMAK Ghent in December. Your work has grown in scale significantly since then—do you now feel facilitated to make larger works?

ADRIAN GHENIE: It’s not necessary to try to make a blockbuster, where every one is talking about that show. It’s trying to make people more familiar with an aesthetic that may be hard to digest. If you want to have a healthy art scene it needs to start with openness to education.

RIOLO: How has your work been received back home in Romania?

GHENIE: You can’t just transplant contemporary art movements to Romania, where people might not be able to access them as in Western Europe. First you need to sneak it in somehow. For me the development of contemporary art in Eastern Europe looks more like a sociological experiment at this point, not a 100% artistic one.

RIOLO: Does that sociological approach also guide your own practice?

GHENIE: My work is less sociological, and more psychological. I seek images that go straight to your brain, which you can’t help but submit to. If you paint a successful image, you’ll find it months later with a life of its own, scattered all over Google. My painting pie fight study II, 2008, I’ve even seen it reproduced on T-shirts in London.

RIOLO: Are you looking to create images that specifically reach this type of public?

GHENIE: I guess it’s just about creating a visual gesture that is very familiar to everybody.

RIOLO: In the case of pie fight study II, which is a rather gory image of tearing at one’s own face, the figure in this portrait seems to be wiping off more than pie. It’s as if his is smearing away the paint that constructs his own face.

GHENIE: An image like that is based on the very common human experience of frustration. It’s not exclusive to a specific culture or education. If I ask people what they remember about my work, they typically remember this image. I believe that art, especially figurative art, responsibility. If an image is not loaded with symbolic meaning on a Jungian level then it’s an empty image.

I see it more from a scientific point of view. I guess I’m trying to do for arts what [“herd” psychologist and advertising innovator] Edward Bernays did for marketing-invent an object not just to resolve a human need, but to resolve a human desire. He took Freudian research on how desire acts on the human mind and applied this to an economic model. It initiated the birth of consumer society and a new kind of image, one designed to arouse deep feelings in you.

RIOLO: In your works these objects of desire are quite brutal. Unbound, 2007, is an atomic explosion rendered in a classic style that alludes to Whistler’s Nocturne in Black and Gold: The Falling Rocket. This theme continues across your work with massive submarines, spectral figures from military history and scenes of physical violence.

GHENIE: The object itself is nothing; symbols like these only become relevant when you have a powerful point of contrast. Without this sense of contrast an object will stay an object; even if it’s an atomic bomb it will

remain a dry empty shell. Only with an intriguing compositional contrast does the atomic bomb become a radical symbol or evoke a strong sense of desire. Every element in painting is inherently inert. It’s all about how you activate them. Otherwise the work remains a still life.

RIOLO: So how do you create this contrast?

GHENIE: I make an intervention; I associate objects with something unexpected or something that your mind can’t comprehend, something eerie.

RIOLO: You upcoming piece for SMAK Ghent is entitled “The Dada Room.” What is your connection to Dadaism?

GHENIE: The Dadaists suggested methods, like automatic-dictation, free-association and Freudian analysis. My job is to combine these elements compositionally. My artistic experiment is to associate images in order to activate their symbolic meaning.

RIOLO: And how has this process solidified into “The Dada Room” work itself?

GHENIE: I participated in the 2009 Prague Biennial entitled “Expanded Painting,” as I had been working with the idea that if you incorporate paintings and objects, you might start to create a fuller but still painterly atmosphere. As the title suggested, painting is the core of the environment and you “expand it.”

For “Dada Room” I take this to the extreme, zooming in on a constructed environment, so that you actually have to go inside the expanded painting. It’s based on the way the cinematic immerses you in a completely new environment.

RIOLO: There is a strong sense of the cinematic in many of your paintings. Their extra wide format aside, works like Duchamp’s Funeral, 2009, or That Moment, 2007, have an unmistakably film noir character. There’s a hint of scenography in their composition. In your work elements like point of view, shadow and light generate a deep visual field that can often feel quite filmic and uncanny.

GHENIE: Yes that is true. As a teenager there was just one series that really touched me, “Twin Peaks” by David Lynch. I found it absolutely horrifying. In ’92 it aired on Romanian TV. As I dove into my painting career David Lynch remained a core inspiration. He’s not just making movies… he’s making experiments. He plays with something inside of his audience, and his work is so well executed we don’t realize it. I think consciously and unconsciously I want to master in painting what Lynch has done in cinema. It was with Lynch that I started to build the visual language of my paintings.

When you have to paint an object you are faced with two options. If you try to recreate an object from memory you wind up projecting yourself into the work; it becomes very personal, a self-portrait based on your subjectivity. But if you project an image and then paint it, it remains very proper and neutral, lacking that subjective touch. I never wanted my objects and figures to have a personal touch, so I’ve used this technique, especially in my handling of perspective. I arrange everything, as it would be in a film set. I was simply thinking about how I could take a painterly practice and blend it with film but remember I do this specifically to eliminate a sense of this personal touch. The question became how could I create a painting that gives you this intense cinematic experience but stays a painting.

RIOLO: Master directors like Hitchcock or Robert Bresson are often thought to have defined part of the symbolic language of cinema through their own personal style. Auteur theory was developed in the 1950’s to describe the effect by which, these directors personal touch and methodology created the cinematic vocabulary used to define the genre. Do you feel this is also the case with Lynch?

GHENIE: Its not only these directors its also the fact that the medium they use has this sort of creative power. Film is a medium that humanity has dreamt about for millenniums because separately painting, literature and music can seem like fragments. Suddenly humanity had this fantastic medium where everything had been combined. With that you can create the perfect escape, the perfect dream.

THE HUNTED IS ON VIEW AT NOLAN JUDIN GALLERY, HEIDESTRASSE 50, IN BERLIN. THE DADAROOM OPENS AT SMAK GHENT DECEMBER 3.

Beyoncé’s Grammy Looks Through the Years