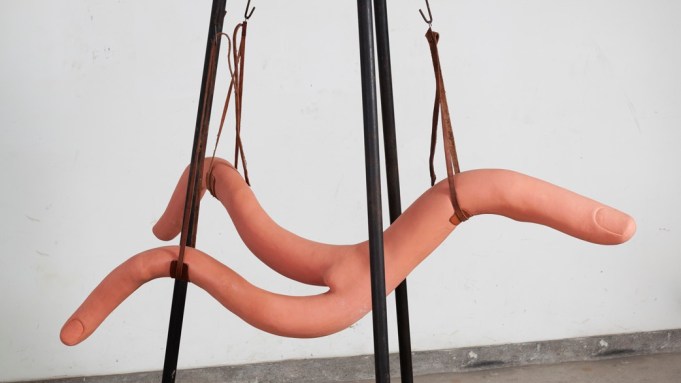 Brazilian artist Tunga has, in recent years, developed an elaborate, idiosyncratic cosmology. Grounded in literary sources such as Poe and Mallarmé, his work reflects the artist’s psychoanalytic research and features an imaginative interpretation of esoteric sciences, especially alchemy. Encompassing a wide array of materials, forms and processes, often with a performative component, his complex sculptures and installations appear to result from some arcane ritual activity.

Not quite an artist-shaman in the mold of Joseph Beuys, the Rio de Janeiro-based artist, 61, is less didactic and more lyrical in his approach. “From ‘La Voie Humide,'” a show of his most recent sculptures and drawings now on view at New York gallery Luhring Augustine (through May 31), includes nine multipart sculptures, which are more like compact installations. In each work, a steel tripod-shaped armature averaging 7 feet tall holds various organic shapes in bronze and plaster that recall body parts like ears and fingers. Large terracotta vessels often filled with crystals, sponges and pearls hint at beguiling narratives.

Lining the walls of a rear gallery is a group of sensuous line drawings in ink on vellum-like parchment. These mandalalike compositions show abstracted nudes, body parts and sexual organs that correspond to similar shapes and contours in the 3-D works. All of the pieces in the show hover between abstraction and figuration. Tunga recently invited A.i.A. to tour the exhibition.

DAVID EBONY Why did you title the show “From ‘La Voie Humide'”?

TUNGA It’s a reference to alchemy, from ancient Greece through Medieval times: “the humid way,” or “the wet way.” There are two basic techniques to transform matter: first is the humid way, with organic or fluid materials and use of the senses. The second, the dry method, would be through the intellect. Philosophy and science, for instance, would result from this process. Each method of transforming matter corresponds to spiritual change. According to alchemical theory, everything we do to matter has repercussions in the spiritual world.

EBONY What are we seeing in the new sculptures?

TUNGA We are looking at bodies, basically. Each is a figure presented in different ways-in morphological and topological terms using varied organic shapes. But they are not recognizable as bodies at first. I’m trying to suggest a moment just before that recognition. The idea relates to the pre-mirror stage in psychoanalytic theory, the moment just before a child recognizes his or her body reflected in a mirror. The child doesn’t yet have an identity, or its identity is not yet fully formed.

EBONY From the Skin features a large terracotta bowl filled with blocks of makeup of various skin tones. It recalls some of your earlier works, in which performers smeared makeup all over the sculptures and themselves. Is this the residue of a performance?

EBONY How do you start? Can you talk a bit about your process?

TUNGA I start with a drawing, usually using ink on linen. The drawing suggests a visual narrative that I transpose to sculptural form. Sometimes the source drawing becomes part of the work, loosely attached to the tripod. The drawings indicate body parts and abstract symbols. Disk shapes representing the moon or the sun reappear in the sculptures. The white ceramic bowl-like objects represent the sun, and the blue ones the moon. You can regard the drawings as a kind of musical score that guides the sculptures. They might look spontaneous, but in fact they’re carefully constructed.

EBONY The materials are very strange and interesting. How do you choose them?

TUNGA Most are organic materials, minerals or substances derived from plants. Elixir, for example, contains a terracotta vessel filled with tree resin used to make gum Arabic, and another for the sponges and pearls—they’re real pearls. There’s a sexual symbolism to the materials. Pearls, for instance, have an easy association with sperm. I try to push the materials as far as possible in assigning them a symbolic function.

EBONY Is there a progression to the works? One sculpture seems to evolve to another.

TUNGA Not a progression. There is a congregation, though. In that sense they communicate with one another. One sculpture does evolve from the other. But I’ve always seen my work as a continuum.