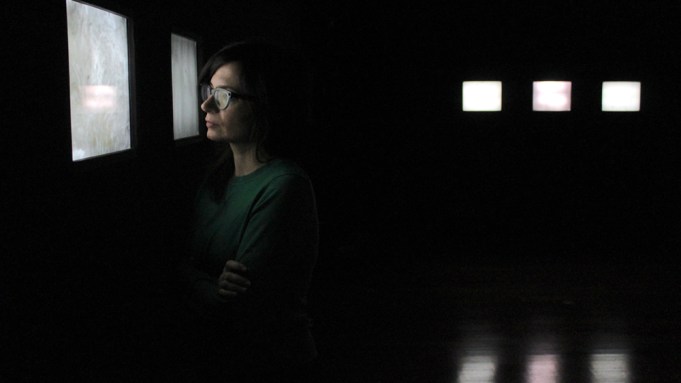 Alice Miceli is a Brazilian artist and filmmaker who investigates how trauma can be embedded in a landscape through experiments with photographic processes. From 2006 to 2010, the artist experimented with radiography—the creation of images using radiation, most commonly used to take X-rays—to record the fallout from the 1986 nuclear disaster at Chernobyl. The thirty images that comprise her “Projeto Chernobyl” are on view at the Americas Society in New York through January 25. Below, the artist explains how her radiographs were made.

The show opens with a few black-and-white, 35mm photographs I shot while working on the project. I was living in Berlin at the time and regularly took the train to Chernobyl, taking photographs along the way. They serve more as my visual diary than as part of the work itself.

“Projeto Chernobyl” is really a record of the site’s radioactivity, which is invisible to the naked eye and to conventional photography. The landscape around Chernobyl doesn’t look radioactive, but it has been permanently altered. To show this, I developed my own process for making radiographs, first by working with physicists at a radiation institute in Rio de Janeiro. Their lab has controlled radioactive sources, including cesium 137, which is the element most present in the Chernobyl contamination. I built a model to replicate the conditions at Chernobyl, though things always work differently when you can control all of the variables. After experimenting in the lab, I planned to expose the negatives to radioactivity for two weeks. But on site, I realized it took much longer for images to appear, and began exposing them for a minimum of two, sometimes up to eight, months. It took a while to iron out the process, but eventually, I was able to take multiple radiographs of the same site and get similar results, which proved that the process was successfully recording the radiation. Some of the images were taken using a lead pinhole camera, where I forced gamma rays to work like light and project a record of radiation levels onto the negatives. Lead is one of few materials dense enough to stop the penetration of gamma radiation. But the lead camera worked better in the lab than on-site, so at Chernobyl, I also exposed negatives by laying them directly onto radioactive matter, such as trees, yielding a one-to-one imprint of the contamination. Many negatives I laid out were never found again, or were ruined by rain, though in some cases the rain made beautiful radioactive watercolors.

For this show, I’m showing the negatives backlit in a dark gallery. Here, I wanted to display the actual matter that was exposed in Chernobyl, not a print or a copy. I’ve only shown the negatives once before, in the 2010 São Paulo Bienal. In the negatives, the dark areas indicate radiation. But there is another version of the work—a positive version, where the light areas indicate radiation. The positives are contact prints, meaning the negative is exposed while laying directly on photosensitive paper, not projected onto the paper using an enlarger. Since the celluloid negatives are already quite large [117/8 x 15 ¾ inches], and some are life-size imprints of the radiation, I didn’t want to enlarge them.

Different objects—trees, rooftops—yield different patterns: you can see the texture of an open field in several of the images that I shot with the pinhole camera. Some have a line running across them that looks like the horizon but actually comes from contact with a metal frame I sometimes used to hold negatives still over the months that they took to record radioactivity. Because there’s radiation everywhere—it’s even emitted by the sun—impressions are made on the film from both sides, unlike in traditional photography. Sometimes in the radiographs you’ll see concentrated light areas: they’re records of hot spots, which are radioactive particles that were embedded in a material’s surface during the accident. Those spots pose severe risk for contamination if you touch them, but they’re completely invisible to the naked eye.