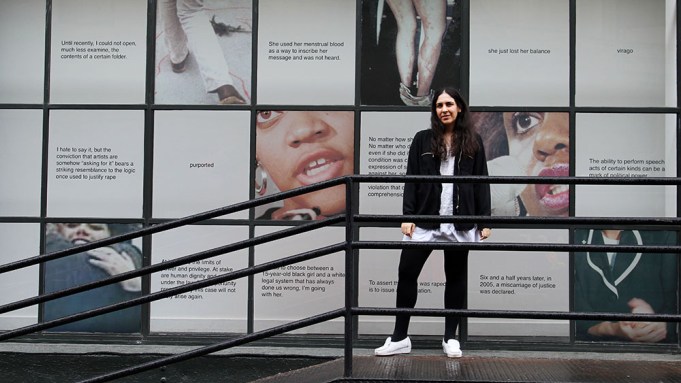 Aliza Shvarts’s exhibition at Art in General in Brooklyn—which was scheduled to be on view through May 9—is titled “Purported.” This word, like “alleged” or “reputed,” is often used to subtly cast doubt on whether certain events took place, and many of the videos and installations in “Purported” are about the experience of not being believed. Shvarts, who recently received a PhD in performance studies from New York University, first gained notoriety for her 2008 Yale BFA thesis, a yearlong project for which, each month, she artificially inseminated herself and then took an herbal abortifacient. Below, she discusses the traumatic experience of being at the center of a viral controversy, and how the work and its reception posed questions that she continues to explore in her practice today.

Langdon Graves on Family Myths and Commemorating the Dead

On the front desk, there’s a stack of catalogues for “Purported” that all have the same QR code on the cover. Scanning the code delivers a prompt: you can opt in, and have an email sent from your account to everyone you’ve ever corresponded with. The email invites your contacts to participate, too, and distributes an essay I wrote called “How Does it Feel to be a Fiction?” The QR code is a new means of presenting of an essay and email chain that was commissioned by the nonprofit Recess after the 2016 US presidential election. Recess asked me to write about fake news, and I wondered: why me? I realized it was because I once was fake news.

Footage from my untitled BFA thesis is on a small monitor at the other end of the gallery. Each month, I artificially inseminated myself when it was possible for me to become pregnant, and then took an herbal abortifacient. I never knew if the subsequent bleeding was from miscarriages or menstruation—and I never used the word “abortion,” though that’s what many people interpreted the work to be about. The uncertainty was the point of the piece.

The school’s newspaper, the Yale Daily News, published an article about the project, and the story got picked up by the Drudge Report, Fox . . . it was an early viral phenomenon. Yale tried to tone down the piece by issuing a statement labeling it “a creative fiction.” The internet has changed so much over the past decade-plus, but the experience of going viral, then receiving a lot of hate—in my case, death threats—is pretty much the same. The ordeal was such a formative experience, not only because it was traumatic, but also because I keep returning to the questions about being believed that the piece ended up posing. I stretched the footage out so that the run time is the scheduled duration of the exhibition: 1,632 hours. I wanted to emphasize the boring qualities of the performance. It’s not some spectacular event.

I wrote a response piece in the Yale Daily News, naively thinking: “If only I could explain things from my point of view!” It crashed the site. There were so many negative comments, and they were all really difficult for me to read. I started thinking about how comment sections like that one are almost digital monuments to controversial moments. For Banners (2018), which is hung from the ceiling by the front desk at Art in General, I made screengrabs of five complete comment sections responding to different controversial events—my own story, and four others—and then printed them, turning them into physical monuments.

All the stories are complex, but the comments are almost interchangeable. One of the banners shows Twitter replies to Bahar Mustafa, a Goldsmiths student who received death threats after organizing a POC-only screening of the film Dear White People [2014]. Another is the comment section for the [2013] essay “Exiting the Vampire Castle” by the Marxist theorist Mark Fisher. He critiqued the way identity politics often overlooks class, and also the essentialism of cancel culture. The article elicited a lot of criticism. He died by suicide four years later.

For Cite/Site [2020], I’m displaying a different image or text in seventy-two panes of the gallery’s windows. They are all of or by people, mainly women, who tried to speak but weren’t believed. The images show well-known figures, but they’re closely cropped, then printed on transparencies and adhered to the window, which makes them less recognizable. I included artists like Ana Mendieta and Valerie Solanas, as well as figures like Monica Lewinsky and Anita Hill.

I don’t put content warnings on my work, but I did put one series—which centers around rape kits—in a separate room, because I do believe in consensual viewing. I tried to gather rape kits from all fifty US states. Most of them come in boxes, which are displayed on the walls. Directly below the boxes are xeroxes of their contents, which are placed on a low shelf so that people can look through them. I wanted to understand this mysterious object we hear about on TV shows and in the news, and learn the logic of this device that decides who gets believed. Usually, only the person administering the exam sees the kit. I’ve only obtained thirty complete kits. Many states wouldn’t give me access. Some are partial reconstructions from photos that people sent me.

The kits vary wildly in terms of the steps they require for gathering evidence, the language they use, the ways they define rape versus sexual assault. Virginia’s kit uses old-fashioned slang, words like “buggery.” The installation is part of an ongoing comparative analysis of the language the kits use—a continuation of my interest in belief and evidence, and in how language produces action and has consequences.

The ‘Book More Women’ Campaign Called Out Male-Heavy Festival Lineups. Did It Help?