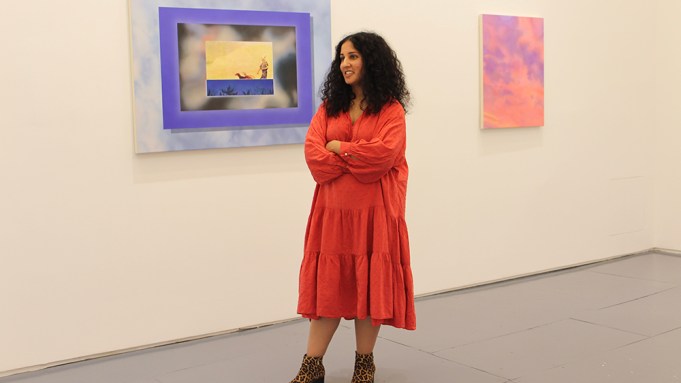 Amna Asghar’s “Portals,” on view through October 13 at Klaus von Nichtssagend Gallery in New York, comprises twelve works: painting, screen prints, and sometimes combinations of the two, all on canvas. While her earlier paintings sampled pages from Pakistani digest magazines, her new works (all 2019) pull imagery—primarily renderings of skies—from depictions of the Orient in Disney movies and by European artists. Scenes by the nineteenth-century French painter Jean-Léon Gérôme recur in Asghar’s work alongside excerpts from The Jungle Book (1967) and Aladdin (1992). Below, Asghar discusses how her work grapples with these exoticized images, which are simultaneously alluring and troubling.

I was thinking about portals while pregnant last year: at the OB-GYN, I would lie down and look up through a skylight above me. In a situation that was otherwise uncomfortable and sterile, the window would transport me to a different place. I’ve always thought about paintings as portals, and I also started thinking about my own body as a portal. The sky paintings offer more restful, and contemplative spaces that I didn’t have in previous works—a response to feeling overwhelmed and angry about the current political climate. They’re those moments of quietness when you just don’t know what to do.

I was born and raised in Detroit to a brown family, and married a white man who converted to Islam. While reading Edward Said’s Orientalism [1978], I began to think about where I fit into the Orient versus the Occident as a Pakistani Muslim American. How do I connect all those positions, especially as an artist?

Disney animations were my first experience of orientalism: The Jungle Book, Aladdin. You can see foliage from The Jungle Book in my painting They Met Me at the Gate, on view in “Portals.” The foliage is layered with a yellow image, which, as with a lot of my screen prints, is pulled from a painting by Gérôme [On the Desert, ca. 1867]; he was an orientalist painter who recorded Napoleon Bonaparte’s excursions to Egypt. Gérôme’s The Snake Charmer [ca. 1879] is on the cover of Said’s Orientalism. As with Disney animations, the quality and the color of Gérôme’s paintings is so attractive: I love them, but I also want to pervert the perverted.

I’m corrupting his really beautiful paintings into four-layer CMYK screen prints. I made five small screen prints on canvas from Gérôme’s Les Deux Majestés (The Two Majesties),1883, which shows a lion looking at a sunset, as if straight out of The Lion King [1994]. My reference isn’t the actual painting, but a JPEG of it I found on Google. I cropped it, showing only bits of the sky. A few of the canvases are straight CMYK prints, but I kept making more and more using different colors until I got something that I liked. I thought of this as analogous to finding an image on Google, where you can see the same painting in a bunch of different colors: sometimes the sky will look very yellow, sometimes more pink.

The foggy images that you see in They Met Me at the Gate and in Portal II (Egypt) are of refugees travelling from the East to the West. They’re from CNN’s website, where you have to click an extra button before sensitive content is revealed to you. I’d been thinking about color fields as spaces of rest, but in this case, it’s a way of blocking out something very violent. I forced myself to click and look at the image, then archived it. I painted the blurred versions.

Three airbrushed paintings are of skies: Hamtramck, 2016; New York, 2015; and Agra and Baghdad. Two are painted from iPhone photos of skies that are dear to me, and Agra and Baghdad is pulled from Aladdin—Agrabah, where the movie is set, amalgamates India and Iraq, and Pakistan is right in the middle.

Portal I (Wk. 137), which is in the hallway that leads to the show, depicts women bathing in a reflection pool from the Gérôme painting After the Bath (ca. 1881). I love how it shows community among women. It’s made by a man, and he is an orientalist painter, but there’s something really beautiful and luscious about it. So how, as a woman, do I see myself reflected? It’s from a series of paintings I’m working on that all say “X number of weeks to a fairness like never before.” The phrase is from skin-whitening ads in magazines my mom would read; the original ad said “six weeks to a fairness like never before.” I started inserting the number of weeks Trump has been in office, so this painting says 137 WEEKS, marking the number as of the opening of this show. People might not read this reference, but still, I’m painting it in vivid blue and red that vibrate off one other and hurt your eyes. The landscape in this painting comes from an Aladdin book published by Disney—I’m drawn to its luscious qualities while disagreeing with what it depicts. At the bottom, it says PLACID, STILL, AND ETERNAL: Said used these words to describe how the West depicted the Orient. There’s a lot of talk about canceling people who have erred, but some things need to be put in the recycling bin. It’s important to be critical, but in some ways, I want to emulate Gérôme while figuring out what should change and shift.