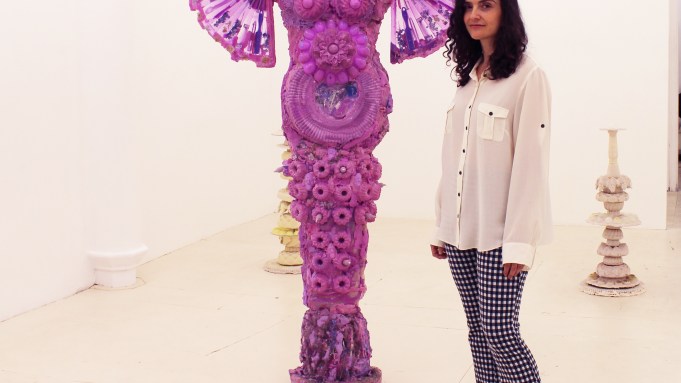 After Canadian artist Amy Brener’s father, sculptor Roland Brener, died in 2006, she began incorporating casts of his face into her video work, questioning promises of improved health through the application of medication and growth stimulants. Over time, her use of the face became the basis of a sculptural practice using mold-making and casting. The utilitarian objects that she uses in her sculptures include—but are not limited to—combs, hardware, toothbrushes, watches, and pills. She casts computer keyboards, pills within pill containers, and other everyday items, and amalgamates the results in sculptures. Through this process, Brener strips objects of their functionality, asking viewers to see them abstractly in relation to ritual and archaeological practices. Employing new materials, such as plaster, and creating new semi-figurative sculpture, her latest work combines objects and materials that, meshed together, compress time and space, and evoke a feeling of nostalgia. Below, Brener discusses her exhibition “Consolarium,” on view at Jack Barrett in New York through December 20.

The show’s title, “Consolarium,” is a word I invented. I was thinking of the word “console,” which can refer to many things, such as video game systems or compartments in a car for storing junk. I integrated the implied functionality of storage into my work with units housing little objects, like pills. At the same time, the verb “to console” implies an experience of grief. I started casting my father’s face when I was in grad school, applying an assortment of products to it, like Emergen-C Bone Health and Miracle-Gro, as though attempting to bring it to life, and then employing the casts in pseudo-infomercials. I was grieving through consumer culture. While dealing with this loss, I made use of what was at hand as a futile attempt to push objects to do what they truly can’t do. Treating the mold of my father’s face with different materials, in a multitude of ways, became a ritual. Recently, the incorporation of his face has become more of a decorative motif. I 3D print copies of previously made casts, in various sizes, and combine them with throwaway objects, acknowledging a common matter between them.

Many of my sculptures I label under the term “Omni-Kit,” which I began using around 2016. I came up with it as a nod to “variety packs” filled with school supplies and sold at the end of summer, which I remember from growing up in the ’90s. My “Omni-Kits” contain practical items for building and sustenance. I encase single-use items and disposable tools from dollar stores, hardware stores, and drug stores within larger casts. Omni-Kit (Eeostra) [2019] is an assemblage that functions as both a storage system and fertility goddess, and involved casting a lot of different shapes and objects. Many of the forms in the sculpture come from a process of stacking and assembling prefabricated molds—cake pans, deviled egg trays, plastic packaging—that I have around my studio. I’m interested in how preservation and utility speak to questions of archaeology. What do we, as a society, choose to save and treasure? What are these objects and what do they mean to people who use them?

I’m fascinated by the way we approach artifacts. Many of the ancient objects we now revere were once mundane tools that most people didn’t think twice about. My work is partly about experiencing objects outside their usual context and giving them attention that they could potentially receive from future generations, as with artifacts in a museum. As I was making Omni-Kit (Eeostra), I noticed that it resembled historical statues of fertility goddesses, with wings and prominent breasts. Bulbous sculptures of Diana of Ephesus come to mind, but the title is a reference to the pagan fertility goddess after which Easter was named. This approach is quite new for me, as I haven’t been so explicitly figurative in my sculptures. Until I constructed Omni-Kit (Eeostra), I had been making silicone works that are more like sheaths or garments, such as Flexi-Shield (Eostra) [2019].

I think of the smaller works that hang on the walls as crests or emblems. The silicone drape hanging from Omni-Kit (Roulette) has reverse magnification because I painted silicone onto a Fresnel magnifying lens used in old overhead projectors. The lens has tiny ridges like a record, which are picked up and remain imprinted on the silicone. In this show, I’ve combined opaque materials—Hydrocal plaster, sand, and polyurethane foam—with translucent silicone and resin elements. I cast a circular deviled egg tray in silicone and, within the eggs, I placed little items. The deviled egg tray cast appears in all the works. I was drawn to the shape because it reminds me of a clock as well as the concept of fertility. With their elaborate patterns of objects and cast forms, I see the works as celebratory, monumental items that could be used in some sort of ritual. I keep returning to the idea that, in another reality or in the distant future, these objects that I placed within the egg tray casts could hatch or be extracted from their resin encasements. Placing smaller objects within larger casts gives them an otherworldly feel and a different meaning. Maybe it speaks to a future in which things are viewed differently, with alternate meanings and potentials.