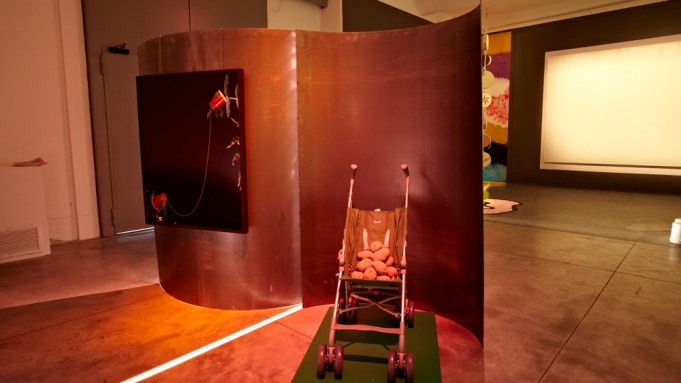 Lauren Mackler and Andrew Berardini, both L.A.-based, had just curated an exhibition of L.A. artists in Turin’s legendary reliquary, the Chapel of the Holy Shroud, during the 2012 Artissima art fair when they began planning “Set Pieces,” the group exhibition at Cardi Black Box gallery in Milan now through April 15. Mackler, who runs the shape-shifting east L.A. project space Public Fiction, and Berardini, a writer who often folds fantasies into his art criticism, had thus twice been asked to curate exhibitions in Italy. But neither is interested in creating conventional thematic group shows, nor are they that interested in “bringing L.A. to Italy.” So they tried to do something more inventive. The Turin show involved placing mirrors on the floor of the church, then arranging sculptures and paintings above the reflection of the church’s fabulous vaulted ceiling.

For the Milan show, Mackler and Berardini asked four L.A. artists—Liz Glynn, Matteo Tannat, Sarah Cain, and Samara Golden—to build sets. Then they arranged work by 15 other L.A. artists, most young and some veterans who came up in the ‘70s, inside those sets. The theatrically lit show looks like a mysterious maze of in-progress stories. A week after Mackler and Berardini returned from Milan, we met for coffee in L.A.’s Highland Park and talked about how “Set Pieces” at Cardi Black Box developed.

CATHERINE WAGLEY How did the invitation to create this show come about?

ANDREW BERARDINI I think Nicolo [Cardi] expressed some interest in working with some Los Angeles artists or doing something about L.A. I didn’t want to do another show that was, like, “new art in L.A.” The thing that Lauren and I did in Turin and the show in Milan were an attempt at doing something stranger or more beautiful.

WAGLEY How did you grapple with being ambassadors from L.A.’s art world to Italy’s? It’s a weird position to be put into.

LAUREN MACKLER That’s why we decided to be the ambassadors of our ideas and use the playground we know the best, which is our L.A. community, to do this show that plays out on the threshold of what’s real and what’s fake. What’s context, what’s frame and what’s art?

WAGLEY These overlays of fantasy and reality must be relevant to people everywhere, but somehow, in Los Angeles, people get especially excited about that conversation.

MACKLER I’m not sure if [these overlays] are as interesting anywhere.

BERARDINI If L.A. has a specialty, it’s that there is no fixed story of Los Angeles. It’s like L.A. can play any character you want. There’s this hotel that I drive by all the time on Sunset Boulevard. It’s called the Olive Motel and it appears in a Bill Leavitt painting. I’ve had dreams about owning that place, and I’ve imagined 20 different versions of businesses I would start there. I feel like this is not an uncommon experience for people who come and live here, that there’s the potential to start your own story.

MACKLER That happened to me with Public Fiction. I drove by a storefront and thought, “I can do this. Here.” But, you know, there is a difference between where [we ended up] and where we started out with our idea for this show, which was very simply “let’s invite four artists to build sets and, within the sets, we’re going to show artworks.”

BERARDINI It was that basic.

WAGLEY Did it work like this: you invited an artist to make a set, and they chose the artists to exhibit in their sets?

MACKLER No, we picked all the work and all the artists.

BERARDINI Lauren and I got together and decided certain works were vaguely for a certain artist and then we went to talk to the artist, and the artist had some say in the space of their imaginary.

WAGLEY So you arrived in Milan with all the work-

MACKLER It had been shipped.

BERARDINI We did have some things in our suitcases.

MACKLER The four set artists built everything there. There was nothing; then, seven days later, there were sets.

WAGLERY Is Sarah Cain the only painter who was a set builder in the show? Liz and Matteo both do installations.

MACKLER They’re sculptors, installation artists. I think Samara Golden is more interested in environment, though I think she does consider some of her pieces paintings.

BERARDINI There’s a beautiful tradition [of painters working with sets]. Hockney did stuff for the opera, and Matisse did sets for various avant-garde productions. In a way, the artworks by artists are like characters. And like in the great Pirandello play, Six Characters in Search of an Author [1921], all these artworks are searching for an author to tell their story.

MACKLER When we were installing Samara’s set in Milan, we spent a whole day with her, just moving art around and talking about where it could go. Then we left and came back to find it totally different.

BERARDINI And Matteo’s kind of an itinerant Dada poet who tells you 10 different ideas and all of them are beautiful. Then he shows up and does something completely different from what he had planned. But he had very on-the-spot, beautiful reactions to different work.

WAGLEY Did you two read that Meg Cranston essay in Bard’s Red Hook Journal a while ago, where she compares curators to hairdressers? She talks about young curators who will come in to her studio and say they want to do a show, but defer to her. If she goes to a hairdresser, she says she doesn’t want to be asked how to cut her hair; she wants her hairdresser to make her look good. I remembered that essay when thinking about the way you structured your show.

MACKLER Meg feels that way, but then another artist probably feels differently. Sarah discussed her ideas with us, but she wanted to know which artists would be in her set a month and a half in advance. She probably goes to the hairdresser and says, “I want this.”

BERARDINI She actually cuts her own hair.

BERARDINI For myself, in thinking about the collaborations in this show, I just went back to the central premise. If we were making a play, there would be a playwright, and a director and a set designer, and we would work together to make this dream happen.

MACKLER And it would belong to everyone.