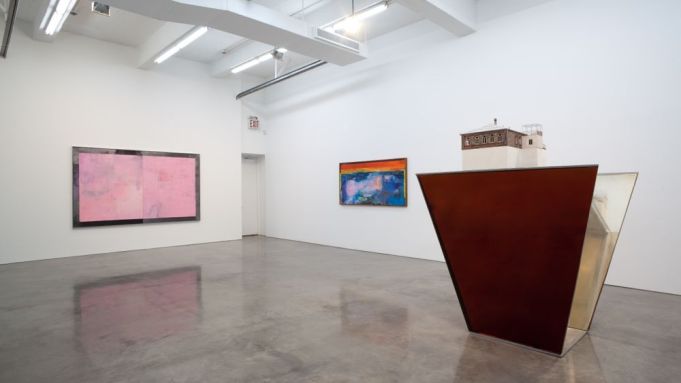 “Dreaming Dreaming,” Andro Wekua’s third exhibition with Gladstone Gallery marks a departure from the artist’s earlier figurative work. The paintings, sculptures, collages and video on view seem to take pains to abstract the figure—in the case of the paintings, burying portraits and collaged material under thick layers of monochromatic paint.

Yet familiar Wekua tropes slip into the exhibition. For Shoulder Grows As Sun Goes Down In My Belly (2012), a wax figurine stands on a palette, wearing blue sneakers, his stomach brutally pierced by a polyurethane bar. In Me With A Pink Wave Hunter (2012), a photograph of the artist and a friend, lying on a bed, is collaged on top of an abstract background of red and blue color-blocked geometric shapes, overlaid with haphazard scribbles.

Wekua works from the paradox of using memory while insisting that subjective experience cannot be communicated. Glimpses of his personal life emerge. A model for the home where he grew up in Sukhumi, Georgia, which he has not visited since childhood, appears in two sculptures in the exhibition. Constructed from memory using information supplemented by online research, the building is full of blank spaces that Wekua refers to as “memory gaps.” During a conversation with A.i.A., he refused to divulge further details about the house or his childhood, insisting that he doesn’t read meaning in his work. The house came to him; he used it in the sculptures. He doesn’t understand why, and as the viewers, neither can we.

BRIENNE WALSH Using the title “Dreaming Dreaming” as a starting point, could you tell me how dreams factor into your work?

ANDRO WEKUA The exhibition title refers to one way that I’ve attempted to experience reality in my production—questioning it, and trying to see it from other perspectives and states.

WALSH The exhibition explores memory as a complex construction that weaves together fragments of personal recollections, collective histories, and artifacts. Memories, although we think that they are the past, happen simultaneous tothe present moment.

WEKUA Memory is a tool I use in my working process. Exactly how it comes through, or if it comes through in the work at all, is difficult for me to answer. I imagine memory as something simultaneously precise, and not at all. What’s most important for me, in terms of memory, is to use it to find a starting point for the work.

WALSH Memories could be construed as fantasy. We reconstruct what we remember based on a specific set of criteria that factor into our consciousness at a specific moment. How do you use the intersection of memory and fantasy in your work? Are memories really just fantasies of how we wish our lives could be?

WEKUA That’s an interesting question and one that is difficult to answer in a concrete way. All ways are possible and all possibilities exist. I think your question, also, could be extended to confront our experience of the present-and not just of memory. Reality itself is subject to this kind of imagining and fantasy.

WALSH In Folded Sunset (2012), a model of the seaside house in Sukhumi, Georgia, where you lived as a child, rests on a large reflective plinth. In Yet To Be Titled (2012), the same house, painted in bright colors, rests on an ordinary white pedestal. Why did you place the house in Folded Sunset on such a large sculptural platform?

WEKUA We developed a particular kind of glass material for the platform, a glass that has more depth than other materials because of its transparent interior. It also has a kind of mirror effect, due to a coating, on the backside, of silver paint, as a mirror would have. The material also allows for an interesting color gradation and, in this way, comes to resemble the experience of a sunset. The plinth is then a kind of two-dimensional sunset folded into a freestanding, three-dimensional structure.

WALSH Why does the house appear twice in the exhibition?

WEKUA The building was difficult to reconstruct from memory and became a kind of reality that could exist simultaneously, in different places and dimensions. I made a second house for the show, a smaller one, in order to play with the form, and see the differences that arise.

WALSH Your family had to leave the region where you were born in Georgia when you were a child. Because you cannot return, you are able to reconstruct the spaces of your childhood based purely on your own memories—they become your own. It offers a certain luxury of distance.

WEKUA The luxury you mention is a complicated thing. But as it is, this idea of not having access, not being able to return, has served as a strong push-a motivator and a reason to question things I continue to consider. Athough I feel all life events are important for artists, as they must be important for everyone, it has ceased to be a personal experience for me at this point. It often seems this biographical detail, this fact of my childhood, is discussed to the exclusion of any other reading of the work.

WALSH The medium of painting seems like an appropriate way to express a memory, because in the process of transcribing an idea, it transforms and takes on new meanings.

WEKUA I paint because that’s what I’ve always done, because that’s what I studied as a child. I never really took pictures, or have ever wanted to do so. But yes, painting also contains time in this interesting way, and records a process of making and of thought. It is an experience with which I feel intimate, and it is an important one for me.

WALSH The exhibition also includes a short video, Never Sleep With A Strawberry In Your Mouth (2010/2012). What is the thematic, and even formal link between your other work in the exhibition, and the videos?

WEKUA A video is a narrative that demands time for its viewing, and unfolds only at a particular, predetermined rate. It cannot be contained in one frame—an interesting contrast to painting—and when you turn the film off, it ceases to appear and no longer physically exists.

WALSH Scenes in the film include animated shots of a sunset seen from a cliff in a city, upon which is superimposed dolphins that spin like charms in the sky, as well as shots of a mannequin boy sliding open the door to reveal two adults sitting at a desk. It’s all very surreal and haunting. Even though the film was dreamlike, I felt more connected to my own memories after seeing it than I do looking at most art. Was it your intention to set memory in motion?

WEKUA Animation allowed for the transmission of memory into an artificial reality. In the kind of animation I use, many details are missing—specific textures and features—yet the picture feels whole. It’s a parallel kind of vague form. Form that is uncanny for its resemblance of reality, yet eerie in the absence of clear, identifying traits.