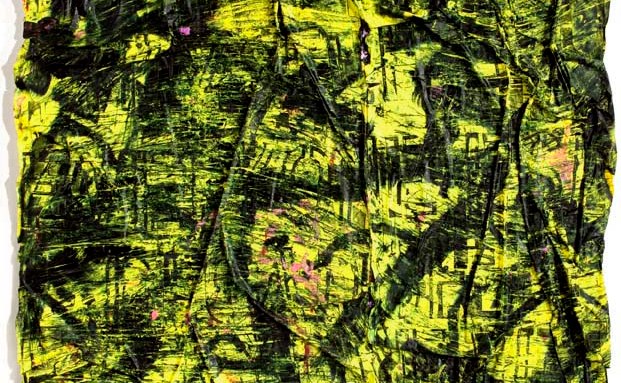 Angel Otero’s studio in industrial Ridgewood, Queens currently lies fairly empty. Sitting in the main workspace is a reduced-scale model of Lehmann Maupin’s Chrystie Street gallery, complete with mockups. In one corner a few gold “oil skins,” the artist’s sheets of dried oil paint, drape atop a stool like the slough of a reptile. These are the remainders from “Memento,” Otero’s first solo show at Lehmann Maupin, currently open through April 17.

Otero’s recent body of work comprises ambitious abstract paintings, such as There’s Nothing So I Wonder, a 7-by-8-foot canvas covered in warm orange and splashed with shades of ice-cold blue. The phrase “There’s Nothing So I Wonder” is stenciled on top. The artist hand-wrinkles the material affixed to the top of his canvases to create the effect of veins and the illusion of depth, but this technique also lends material weight and transparency to the image. At first glance, the painting clumps into abstract patterns so beautifully that it’s easy to mistake it for fabric—what the viewer sees is in fact a full sheet of oil paint, what Otero calls an “oil skin.”

Born in Puerto Rico, Otero earned both his BFA and MFA from The School of The Art Institute of Chicago. In his previous work, the 29-year-old artist created figurative and highly personal paintings and sculptures, often using tropes from the Spanish Baroque style. Otero’s forward-looking new work—the central focus of his show at Lehmann Maupin—tests the limits of painting as a process and presents paint as an object. A.i.A. spoke with him in-studio:

MADISON MOORE: What is the intention of the “oil skins”?

ANGEL OTERO: It’s to reference the history of painting. What can you do with paint? For me it’s very important because I’m a painting history freak. I grew up learning about the New York School of painting and artists like Pollock and de Kooning.

MOORE: There’s a large piece of Plexiglas on the wall with the phrase “Flesh Is The Reason Oil Painting Was Invented” stenciled backwards. Is this something you’re currently working on?

OTERO: Yeah, this is in process. This is a text piece called “Flesh Is The Reason Oil Painting Was Invented,” and it’s something that de Kooning said a long time ago. I paint on glass in a very traditional way, as if I were painting on a canvas with oil paint. After I feel the painting is pretty much done, then we actually cover it with more oil paint, which later will become the background. And then they go to dry. The scraping process is kind of intense. But it definitely starts like this.

MOORE: When did you begin this approach to painting?

OTERO: I was finishing school and my professors got on me hardcore about how to make a painting “stand out.” All the oil paint I would save from making painting, and I started taking the dry parts and collaging them on the canvas. I thought it was very interesting.

MOORE: You had a show last year at the Chicago Cultural Center titled “Touch With Your Eyes,” which I read in another interview was a saying your grandmother used to say to you. Can you tell us about what “touching with your eyes” means in the context of the kinds of work you’re producing now?

OTERO: It’s a saying she would use every time I go somewhere and didn’t want me to touch anything in the store.

MOORE: How interesting, because your work has a very tactile or material quality to it, so looking is almost like touching with the eyes.

OTERO: It is! That’s actually why I called it that, because the work asks for that, asks for people to touch it. But I couldn’t touch shit when I was in stores or anywhere.

MOORE: And the irony is that we’re not supposed to touch the works in the gallery. Even though they sometimes invite touch, don’t do it [laughs].

MOORE: Speaking of the earlier work, there’s an untitled piece you made from 2008 with a pot on the ground and table cloth imagery is spewing out of the picture plane.

OTERO: Yeah, that’s the piece that actually put me on the spot over there in Chicago. It’s a piece that had to do with a very personal dining table at home. I wanted to paint with a brush and at the same time do something really fucked up and try to find some sort of balance in terms of making it not about a place but about a thing. And that’s where I started doing this painting/collage thing. I was broke as hell, so I was experimenting with what was around me. It’s not about trying to make a pretty painting, it’s about trying to make a different painting.

MOORE: That one in particular was navigating this boundary between the flatness of the wall and the open space of sculpture. It was a painting and a sculpture.

MOORE: What can people expect to see at your Lehmann Maupin show?

OTERO: The show highlights my new process. Some of the pieces have stronger imagery than others, not because I wanted them like that. It’s because the process kind of breaks down a lot of imagery. When the whole sheet is scraped out, it’s a full sheet of paint. And when we’re ready, the canvas goes on the floor with a thick layer of specific resin, and very slowly I let the paint just fall. And that’s when the wrinkling starts happening.

It was a happy accident, at first. I could do it flat if I wanted. The wrinkling plays such a strong illusion. A giant blob of wrinkling that steps a little bit forward from the imagery, and I think it’s really cool. It’s a nice fight. These things just happen through me working.

MOORE: It’s the boon of indeterminacy in your work.

OTERO: I believe in that shit so hard. Every piece you’re gonna see in the show has some specific accidents because the process is extremely delicate and a lot of fucked things happened. But I think they’re gorgeous because obviously an accident is a very human thing, and being evident on a piece I think makes it more gorgeous. It shows process. It’s the best feeling because you didn’t expect it.

MOORE: One last thing. What does your tattoo say?

OTERO: “If you don’t know how to fly, you’re losing your time with me.” [One of Otero’s recent text-based works bears the phrase as its title].

MOORE: Do you have any others?

OTERO: I have a tattoo of a paint splash.

MOORE: You have a tattoo of a paint splash?

MOORE: So you love ink.

OTERO: I do! I’m probably the most clichéd painter. I have a Picasso painting, and some other stuff, it’s just crazy. All my friends used to make fun of my tattoos because they had the cool snake with the sword or some weird thing. Every time we would go to the beach I would feel so embarrassed. The first one I did was the Picasso-a painted naked woman. And the tattoo artist thought I wanted a naked woman. And I was dying there. I went to the bathroom like, “Fuck!”