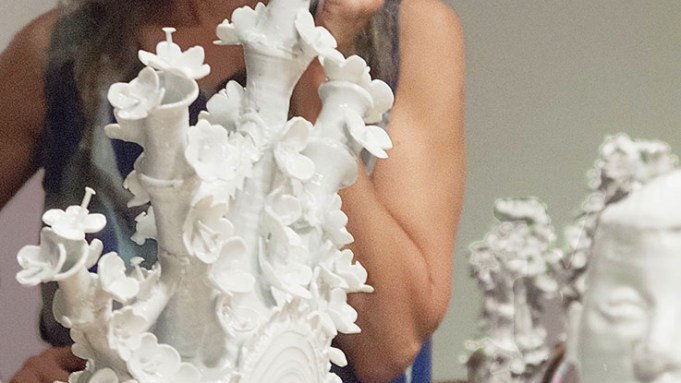 Ornate historical ceramics and a funky Brooklyn lifestyle come together in Ann Agee’s current exhibition, “The Kitchen Sink,” at Locks Gallery in Philadelphia. On view through Oct. 20, the show comes on the heels of the Brooklyn Museum’s group show “Playing House” [Feb. 24–Aug. 26], in which Agee transformed a 19th-century domestic library and parlor into a showroom for an enterprise she calls “Agee Mfg. Co.”

In a range of objects, from nonfunctional lamp bases and clocks to portable bidets and a squirming porcelain newborn in a bell jar, the artist assumes the roles of owner, shop boss and worker. Agee burns for the dignity of homo faber. She first received critical attention in the landmark “Bad Girls” show at the New Museum in 1994, where she installed a bathroom that she had produced during a two-year residency at the Kohler Company plumbing ceramics factory in Kohler, Wis.

Agee has long depicted scenes from her own life—her domestic chores, friends and family, and the tightrope act of childrearing and work—in narrative ceramics. Recently, she has turned to working on the wheel in porcelain, which unlike her earlier, colorful ceramics is left unpainted. She installs her porcelains together with colorful, hand-painted wallpaper panels depicting rooms in her Brooklyn home.

A.i.A. met up with Agee at Locks Gallery in mid-September.

FAYE HIRSCH Tell me about the porcelain baby, which looks like it’s under a bell jar, atop a cake stand. You said you based the jar on an antique Staffordshire gelatin mold.

ANN AGEE I made the molds after seeing a couple of examples in the Victoria and Albert Museum in London. But there was quite an evolution in my thinking about it. The originals had a landscape wedged inside. As you ate, you could see the landscape more and more clearly.

I didn’t add the baby until later. I just had done pencil drawings of that baby. Then I thought that you might want to see a baby through Jell-O.

HIRSCH Such incongruities are really striking in your work. And you seem to have grown more fanciful over time, despite the fact that many of your subjects have to do with your daily life.

AGEE But it’s also about extreme function. They were going way out on a limb to entertain with those early Staffordshire gelatin molds. There was no television, movies, you couldn’t get a DVD. You just had to sit around the table.

HIRSCH But, Ann, you put a baby in it.

AGEE [laughs] Well, yes—I thought, why not mix all that with talking to children about where they came from, and other matters.

HIRSCH It’s nice to see a specimen of a living baby rather than all those dead fetuses the right wing loves parading around.

AGEE Well, I realize it’s creepy, since there’s so much talk about abortion. I’m totally pro-choice. I made the baby to celebrate the birth of my daughter.

HIRSCH Tell me about the weird little bidet.

AGEE I saw a bidet made of plastic in the ’70s when I was staying in Paris. There was one in the hotel I was staying in. I was kind of horrified. It was off in the corner. But for years I thought, what a great object-I should buy one. And I’ve looked for them—for example in the dollar stores in Sunset Park, where they sell all sorts of buckets in various shapes. I never found one, so I made it as I remembered it, in porcelain.

HIRSCH Explain the stamp on it, and on the other objects.

AGEE “Agee Mfg. Co.” It’s my version of what the Kohler Company was doing. I was at Kohler in 1990 and ’91, for two years. I made the bathroom for the “Bad Girls” show at the end of my stay there. My experience at Kohler was so deep and so intense. Being around workers, and considering the hierarchy of labor—who’s in charge. In this enterprise, I’m in charge, but I also make the work. That’s a very exciting thing to revisit. I remember people being filmed to see if they could do something faster. Management was so much more powerful than the worker. And I see that in everything—with my children going to school and so forth. The people who make the decisions do not make the work. That’s so screwed up. If that were balanced out, the world would be a nicer place. We would value the people who make things and do things. Life would be better.

HIRSCH You are the person who owns and runs the company, and who makes everything. But you make some very weird things: dishes that aren’t finished, or lopsided sinks, or mirrors with glass so wavy you can’t see yourself clearly. Is imperfection a kind of ideal in your “inventory”?

AGEE [laughs] It is. Thinking back to Kohler: if the factory workers had freedom, everybody’s toilet would be slightly different, and their mark on it would be a fantastic thing to look for: if they could make changes to it, if they could scratch their name into it.

HIRSCH That would take a lot of time.

AGEE But that would be okay, too. Workers should be allowed to take more time. At Kohler, if there was a brown spot on the toilet from the kind of upside-down railroad cars that they pushed the wares around on, if that iron residue fell on the work as they sent it around, they would drill it out and send it back through the kiln again. They were trying insanely hard to make it seem as though nobody had ever touched the product.

HIRSCH Well, I suppose that takes time, too.

AGEE Yes. And in the end they would throw away a lot. If they had to re-fire the toilet three times, they would just discard it instead. I think of the work that I’ve admired, say at the Met, from parts of the world where there wasn’t a distinction between art and things that people lived with or needed. Like an African bed. It’s just so stunning. And it had a function.

HIRSCH But that function might not be immediately apparent to someone in another time or place—like the Staffordshire gelatin mold. Who would ever know that?

In the figurative pieces, are the characters people you know, as they used to be?

AGEE Well—the man is Flavio, my husband, and my daughter and son appear, but I don’t necessarily know who the others are. Some of them are fanciful, others not.

HIRSCH You used to make such colorful ceramics, but they are white. Not so the wallpapers, with the to-scale depictions of your living room and basement work space. Those are quite bright, even raucous.

AGEE When I started making my works on paper I began to think I didn’t need to paint the ceramics any longer. I thought it would be hard to have them in the same room together. Instead, I imagined them as silhouettes. I was concerned that they would disappear if they had color.

HIRSCH And one thinks of classic porcelain as being white.

AGEE When I was beginning to make this work, I remember someone telling me that when she goes to France and shops at the seconds factories for, say, Limoges, she has a kind of orgasmic experience in front of all the white porcelain. It’s kind of like she can never get enough of it.

HIRSCH Tell me about the ornate pieces-are they vases? Candelabra? Clocks without a clock face?

AGEE I was looking at clocks in the French period rooms at the Met. At first I thought I would make some functional pieces. But then Charles LeDray told me about these African watches that a certain tribe made after they saw colonialists with gold watches. And they didn’t work. I can only imagine how beautiful they must have been. When he told me that, I said, absolutely, they do not need to function.

HIRSCH Plus do you really want to put candles in these and have wax dripping all over them?

AGEE Actually, I think of the pieces you’re talking about as lamp bases. I work in a ceramics studio, and so many of the people there are making lamp bases. It reminded me of my grandmother, who would transform objects she liked—a Japanese sculpture, for example-into lamps by getting someone to drill a hole in them. There’s all this plaster at the top, and glue. It’s so funky. But I understand that desire—and it divides people into different categories, whether or not they would make something into a lamp base. But I wouldn’t want these to be lamps. I kind of like them as memories of something, or as drawings of the possibility of something.