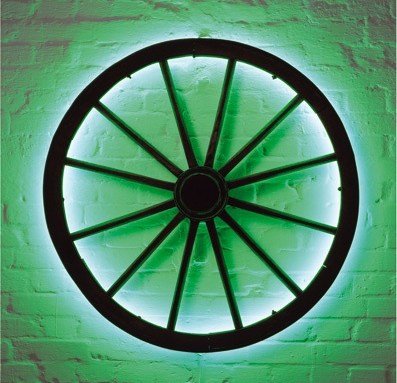 Anselm Reyle, the subject of Art in America‘s April cover story, traveled earlier this year to Des Moines, Iowa, where his first-ever U.S. museum survey is currently being presented by the Des Moines Art Center [through April 17]. New works by the German artist go on view later this month in Berlin, at Contemporary Fine Arts [Apr. 30–June 11]. A.i.A. managing editor David Ebony met up with Reyle in Des Moines to discuss the show, the artist’s idiosyncratic working method, recent works and some surprising new projects and plans. The conversation has been condensed and edited for clarity.

DAVID EBONY: Do you read a lot of art theory?

ANSELM REYLE: No. I actually try to avoid it. I’m more interested in the immediacy of art making-process. It’s maybe the opposite approach of many artists, who don’t give you much to look at, but you need to read three pages of theory in order to really get it or appreciate it. For me it’s very important that everyone can understand this art somehow. There are different levels of understanding. It’s not for people primarily interested in art theory, though there is certainly a level where art theory is in play. For me, a physical confrontation with materials is most important. I don’t go into the studio with a lot of preconceived notions of what I am about to do.

EBONY: You’ve been influenced by street art and also the punk movement.

REYLE: To some extent, yes, especially the second wave of the punk movement in Germany in the 1980s. I was interested in the various kinds of graphic design associated with punk, and with the movement’s energy. There’s a sense of rebellion and opposition I try to convey in my work, in simple ways. When I choose a color, for instance, I pick one that doesn’t fit, or works against other elements of the piece, or doesn’t work at all in the conventional sense of tasteful composition. There’s always this idea of being against something, in opposition.

EBONY: You have seven or eight specific types of objects or categories of works that you use as recurring motifs-stripe paintings, monochrome reliefs, modernist abstract sculptures, Day Glo-painted farm implements, installations with found industrial objects and neon… Why have you focused on these particular formats?

REYLE: Actually, there are around 20 different kinds of works, but maybe you are right that there are basically seven or eight. It’s intuitive. If something interests me I stay with it. But each time I add something to it so it evolves.

I try to keep things simple. In the studio, it can happen that there is too much of everything; there are too many ideas. For example, with the wagon wheels series, I started out with something simple; I painted an old abandoned wagon wheel an unexpected color and hung it on the wall. Then I made variations, like those wheels with the colored neon lights mounted on the back. It’s a balance. I might stop for a while making a certain kind of work, but it doesn’t mean that I won’t return to it again later with a new idea.

EBONY: Speaking of the wagon wheels, why didn’t you bring some of the farm pieces to Iowa-the silver haystacks, the Day Glo wagons or the plows? It is, after all, farm country.

REYLE: I proposed it. I grew up in Southern Germany where there are lots of farms, and the series is important to me. But the Iowa show was a collaboration with Jeff [Des Moines Art Center director and the exhibition’s curator, Jeff Fleming] and he wanted a tight group of works. We tried to make the exhibition not so much a retrospective, but a focused show. Maybe the farm pieces would not have worked so well in Iowa.

EBONY: They could have been perceived as reinforcing clichés about the state. Anyway, the show is very focused as it is, and the works look great together. The first pieces visitors encounter are the large, untitled teal relief painting made of cast aluminum, and, on the opposite wall, the mural-like relief with the square resin panels that look like rusted metal, back-lit by LEDs that slowly change color. Both of these are compositions that began with stuff picked up off the street. Would you say that found objects and street art are your primary sources of inspiration?

REYLE: The inspiration for the cast relief paintings is something I saw in a punk café in Berlin—actually, a wall relief made by a street artist, an elderly lady.

REYLE: No. I actually found out later she lived in a moveable house—what do you call them?—a camper.

REYLE: That’s it. She used to collect rubbish, put it all together and spray it silver. They had one of them in the café. To me, it was more a kitsch item for tourists. That was the departure point for the aluminum monochrome pieces. But that is what I am interested in—things that are not “high art.” Maybe there’s social significance to the work as a kind of recycled art.

Lately, I have been sending my rejected works or studio scraps for the week to the sculptor Franz West, and he sends his to me. We try to finish each other’s work or incorporate the scraps into our works as best we can. We are thinking of showing these pieces some day soon-maybe not in a gallery but in an institution.

EBONY: But you also have an ongoing dialogue with “high art.” The first show of yours I saw, at the Zurich Kunsthalle [“Ars Nova,” in 2006], had at the entrance an enormous hot-pink painting-a spectacular and hilarious riff on a famous 1923 Léger in the Kunstmuseum Basel.

REYLE: Yes, it’s true in that case, but I am just as easily influenced by things found in a flea market, or the surface texture of a battered door.

EBONY: I have been thinking about the relationship between texture and image in your new paint-by-numbers pieces. I had seen a few in reproductions but I was most surprised by seeing an example in person for the first time in Des Moines. In reproduction they look like a Warhol homage, but they are actually much more complex, more related to your own earlier work than to Pop art, I think. They’re all about texture and color in conflict with the image.

REYLE: Again, the banal was the main source of inspiration. As a kid I was forbidden to do paint-by-numbers. My mother was a serious painter, and so those painting kits were taboo in our house. Maybe in America it wasn’t considered such bad taste. In opposition to my parents, I was always interested in them. Of course, the series is also an homage to Pop art. I’ve been working on these pieces for the past three years; they’ll be in a Berlin show [at Contemporary Fine Arts] this spring. I researched more than a thousand paint-by-number paintings. I bought about 150 of them and selected a few to adapt to the new works—horses and puppies.

EBONY: What are some projects you have rejected over the years, or refused to do? Or offers you have turned down?

REYLE: I refuse to make prints; I have done very few editions of any kind. Actually, I have reduced the number of works I make. I want to make each piece exceptional and well focused. I have turned down offers for shows. Sometimes I refuse to do exhibitions where the theme is too narrow and my work doesn’t fit.  I sometimes collaborate with companies but only if it makes sense for the development of my work. However, I try to avoid letting them get too involved in my artistic process.

EBONY: What is your ambition now? What projects are you looking forward to?

REYLE: My main project at the moment is my new studio. I will move this spring. I bought a piece of land outside Berlin, and it is developing into something more than a studio. I can imagine it now as a place to live also, not only to work. My girlfriend is an architect. We decided to tear down some buildings and restore others. But I had this idea to leave the ruins and give the land around some structure. I was a landscape designer before I studied art, and that has come back somehow. I designed an outdoor office and studio area to work outside when the weather is nice.

At the moment, I’m most interested in post-modern architecture, mainly because it’s so out of fashion. So the buildings will have areas of bright color, but not too much. We’ll have colored steel and round windows for punctuation. For the plan, I was most inspired by the Memphis Group-especially work by Ettore Sottsass-mainly because of the way that it is anti-design.