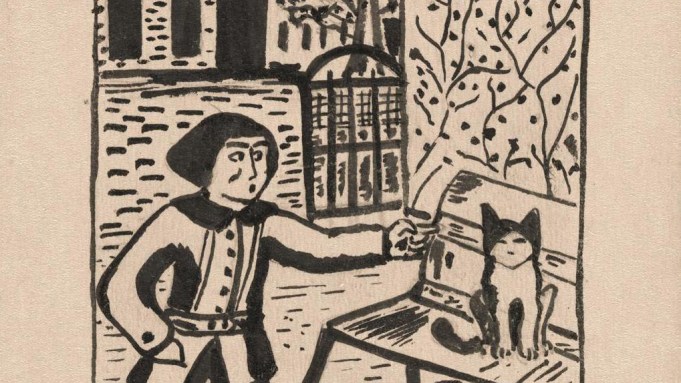 A suite of 40 never-before-exhibited drawings that show French painter Balthus (1908-2001) to have been a child prodigy is part of the show “Balthus: Cats and Girls,” now at New York’s Metropolitan Museum of Art (through Jan. 12, 2014).

The artist, born Balthasar Klossowski, has become so famous for his paintings of girls on the threshold of puberty-sometimes with feline companions-that the world recognizes him by only one name, like Madonna or Bono (who sang at his funeral). However, according to Sabine Rewald, the Metropolitan Museum’s curator of modern art, he is perhaps underappreciated as a wunderkind of a draftsman.

At age 11, he found, fell in love with and lost a stray cat called Mitsou, and told the story of this experience in 40 bold, graphic, emotionally expressive graphite-and-ink drawings. The German poet Rainer Maria Rilke, who was Balthus’s mother’s lover, was so enchanted by the small drawings that he arranged for their publication in a booklet and wrote the foreword himself. The works’ whereabouts were unknown until Rewald tracked them down during her research for the current exhibition.

Rewald talked with A.i.A. at the exhibition this week about the young Balthus’s genius, finding these century-old drawings, and, of course, cats.

TRACY ZWICK These charming, accomplished, child-sized drawings haven’t been seen for nearly 100 years. How did you find them?

SABINE REWALD I did my dissertation on Balthus at [New York University’s] Institute of Fine Arts many years ago. When I started to organize this exhibition, I found an old, typed letter dated 1981 that I’d written to Rilke’s heirs, who had told me at the time that they could help me locate the Mitsou drawings. I called the individual addressed in that letter, who wants to remain unidentified, and traveled to a small city in Germany to find the original Mitsou drawings in a tiny little package. They had terrible spots of glue in the corners that dated back to 1921!

I told the owners, “We have the best paper conservation department in the world at the Metropolitan”—well, I’m exaggerating—and I said, “Will you lend them to us if we restore them for you?” They agreed. Our conservator did painstaking work on them, but she left ink spots to show you that these drawings are nearly 100 years old.

ZWICK Why were the originals in Rilke’s family instead of the Klossowski family?

REWALD Balthus gave them to Rilke as a gift. Rilke was a father figure to Balthus. On the packet we received, there was still the little piece of paper from Balthus’s mother that read: “This is a gift to you, from Balthus.” The drawings were still in the package, untouched since 1921.

ZWICK These drawings resemble woodcuts stylistically, and they are starkly monochromatic, thus unlike any of his best-known canvases. What were his principal, early influences?

REWALD They do resemble woodcuts! Balthus’s mother lived in Geneva and was friendly with Frans Masereel, who is famous for his woodcuts. Balthus was so attuned to everything, I’m sure he knew his work. What is remarkable is not only the emotional expressiveness he was capable of at such a young age, but also his use of perspective. In some of the drawings, we see things from the perspective of a little boy and sometimes from the point of view of the cat.

ZWICK Do you have cats? Are you a cat person?

REWALD I’m allergic to cats, but I do love them. I always go to an Indian newspaperman on my way home—there is a striped tiger cat and I have my little sessions with her. At the moment she’s very aloof. I don’t know what happened but cats are so unpredictable. Usually she comes and sits on my lap, but at the moment she ignores me.