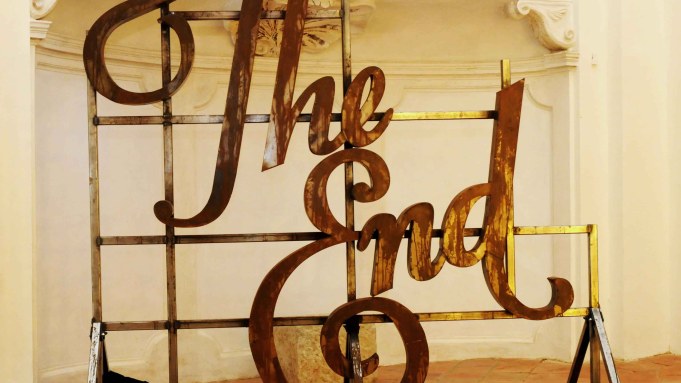 In his current exhibition [on view through Aug. 21] at the Museo Civico Diocesano di S. Maria dei Servi, a 14th-century deconsecrated church in Umbria, Banks Violette forgoes an easy comparison of his frequently Gothic references with the sacred context. Instead, the artist riffed off the church’s vernacular style—its warm ambient light and simple floor plan, not to mention the folksy devotional paintings stored in the basement. Installing his aluminum scaffolds and supports, which allude to the idolatry and spectatorship of a concert, the effect is one of surprising consonance with the implied reverence of the chapel.

“Banks Violette” was curated by Benjamin Godsill in collaboration with Il Giardino di Lauri. Here, the artist discusses his interest in the incongruities of mid-century architecture and the clichés of exhibition making.

ALEX GARTENFELD: One striking effect of the installation was the combination of your luminescent sculptures and the ambient light of the church. What challenges did the light sources present? How would you describe the environment and atmospherics of a space?

BANKS VIOLETTE: I don’t know if I’d describe them as “challenges,” really. If anything, the quality of the light in the church—and the grander history and tradition of the-presence-of-the-divine-rendered-as-light, etc.—together made me think that in this show the works should use light as their central feature. That’s how I approach any show: the space essentially dictates what should happen with the installation. Not that I’d describe my work as “site-specific,” but I’m absolutely interested in how a particular space argues for what kind of work should be installed there.

GARTENFELD: Your work often involves re-mobilizing clichés—looking at the process by which ideas become flat to determine how those meanings operate. What clichés did you encounter or hope to activate by installing in a church?

VIOLETTE: Churches provide their own clichés, in a more transparent fashion than a conventional “neutral” exhibition space. Especially this particular church, since the space isn’t built around a cruciform footprint but is, instead, just a straight shot through and then up and away—it’s the holy equivalent of a railroad apartment. Or a movie theater, with an entrance opening into rows of seating (even if, as is the case here, they took ’em all out) directed towards a fixed vantage point funneling the congregation’s/audience’s eyes towards the altar space/movie screen.

Not to beat the comparison to death, but both spaces are utilitarian, and the architecture of both is bent towards one particular use that relies upon immanence/illumination. A circuit is established between what’s happening on the screen/altar and its effect on the audience/congregation, established through the 35-mm print/light-of-the-Lord.

I imagine that’s the definition of a cliché: something that through overuse and over-familiarity is bound to a single interpretation. Both a church and a theater are spatial equivalents of cliché. Having the installation consist of all illuminated sculptures is just the result then of the over-determined language of that space dictating how and what work would ultimately be installed.

GARTENFELD: Your scaffolding structures, which allude to stages or sets, almost always include sand bags, which seem to serve little structural purpose. How important is it for you that a sculpture be structurally transparent? Is that, for you, a connection to the minimalist idiom?

VIOLETTE: Actually, the sandbags serve a practical purpose the majority of the time—not that any piece would tip over on its own, but they do generally serve as both counterweight, and guarantee nothing will crash down. That said, if they didn’t fulfill a formal requirement as well, I’d simply add additional weight in the form of additional scaffolding, etc.

That period of late ’60s American post-minimal sculpture is something I’m deeply interested in, especially because of that period’s preoccupation with an almost too-easy tension between the rigidly synthetic and the formless and the sprawling. I have this idea that the sandbags and other similar elements connect sympathetically to that work. In the same way the illuminated sculptures in this show have their wiring prominently exposed and just pour onto the floor, the sandbags are a softer, near-organic, formal element that runs contrary to the rigid, explicit structure of the sculptures’ framing.

That said, I’m not comfortable including materials for purely formal reasons, so both the wires and the sandbags serve a practical purpose, which answers your question about structural transparency. That whole idea of transparency, and not just as a structural consideration, is something I’m really interested in. Not just the visible—man, guts—exposed quality of scaffolding, but also theatrical presentations—ones where the audience can see the rigging, cat walks, wire and lighting but still allow themselves to suspend disbelief and invest themselves in a fiction, whether the fiction happens to be a play, a concert. Or an exhibition.

GARTENFELD: Your new text work, The End, had a patina I haven’t seen from you before. Could you describe the references for that piece, and the approach to time in that work? Even the approach to cliché?

VIOLETTE: It’s funny but I’ve had conversations with people who found the patina of the steel used either jarring or incongruous when compared with the rest of my work. I’ve always been interested in the mechanics of fiction, how disbelief itself can be suspended in the face of its transparent presentation, which is why I use a vocabulary that refers to theater or the stage (which is such a clear example of the presentation of fiction laid bare while still remaining effective as fiction).

The black panels I’ve used many times in other sculptures, as an example, are all handmade in my studio. They have bubbles, dust that settles into them while they cure, ripples, etc., plenty of imperfections that are plain for anyone to see. But since they simulate an immaculate surface, people see them that way. Which is fine: in fact, that’s kinda the point.

In the instance of the patinated steel, since that piece so clearly refers to signage, it made sense to present it as if it were signage, complete with its own history of being out in the world working as a sign. It’s like Pottery Barn: rather than an heirloom and the burden of a family history behind it, you simply buy a piece of furniture whose patina implies all of those things for you—without the less interesting histories of divorce, family counseling, dad moving out, who gets what, etc.

GARTENFELD: One work you built specifically for this church. How did you wish for the piece to fit, size-wise, into the room?

For this particular show, I had sculptures I wanted to see together. I made the new sculpture in response to the negative space that remained. More as an idea about scale than any narrative kind of consideration: it was about how much work needed to make the space between each sculpture feel active and not simply empty. That’s a flat-footed way of describing it, but it’s very similar to that gestalt, two-dots-on-a-piece-of-blank-paper thing: rather than you perceiving the empty white of the paper as blank space, the audience interpolates a connecting line between those dots. Same thing happens in an exhibition space, although trying to have this church function as a blank space when it’s got confessionals, paintings, an altar, plenty of guilt things and Jesus was a little harder.

Saint Laurent Will Show Next Men’s Collection in Paris: Sources