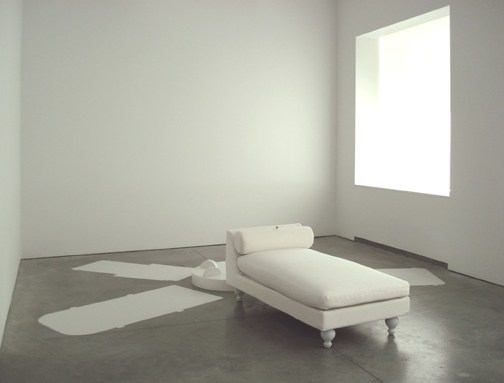 The artist is absent in the work of Barbara Bloom, but emerges periodically facilitated by potential for exchange offered by the art object. In her exhibition of sculpture currently at Tracy Williams, Bloom shows gifts in various manifestations: prior to the opening, the artist’s young daughter opened a wrapped bicycle in the gallery, on the occasion of her birthday. The resulting work is a light-hearted, theatrical record of gift exchange: an opened box, scattered confetti and wrapped materials. The rest of the objects and imagined artifacts here include imagined gifts elaborating personal histories: sets of keys for Jean-Paul Sartre and Simone de Beauvoir, who kept separate apartments; rings for Freud’s followers. These gifts rely upon the contracts of mutual knowledge and generate presence while de-stabilizing Bloom’s authorial position.

Gift economies are awash with discourse about the powers structures initiated by gift-giving. Bloom says she’s interested in the gift instead “as being an ambassador of meaning or feeling that travels.” That beauty resides in the details is a cliché, and a point of resistance to structural analyses of social rituals. “I’m attracted to the enormous, important matters of life that take place on a small, everyday scale,” Bloom said in a 1996 interview with Kiki Smith. “But if you give them a small experience which is somehow confusing or profound, but in the realm of their own world, then it doesn’t have to be translated, it’s already there.”

ALEX GARTENFELD: The exhibition is called “Presents,” and indeed, all the works are gifts, real and imagined. But obviously, these are not takeaways for the visiting audience. Why did you isolate the gift as a modes of communication?

BARBARA BLOOM: If I make an artwork, I don’t really know who my audience is. I can imagine an ideal audience, but that’s all. Making or giving gifts and making or giving artworks, the reception of the objects slides on a continuum. On one side, the most subtle and intimate information about an object is shared; on the other is the lowest common denominator, for general understanding.

GARTENFELD: In the release text, these gifts are presented in a list. Was this intended to function as a categorization, or a structural classification of “types” of gifts: a ring, “an equal exchange…,” charity, etc.?

BLOOM: The works here aren’t really classified so much as chosen as types. There are all kinds of gifts that I didn’t think of when I was writing the text for the release. I’m really more interested in how we know what we know about an object, how is that information transferred. It’s about different forms of address—the very, very personal and the historic, the romantic, the tragic-romantic and the intellectual-romantic and…

GARTENFELD: Classification seems to re-appear, even as you discuss them here. I only bring up the subject a second time because I wonder if there is an attempt here to handle, or understand these “types” of gift exchange, or to relinquish control by manifesting them.

BLOOM: I’m just classifying them as I talk to you. There are, however, different aspects of each object. And I wanted there to be enough different forms of thinking about that moment of giving something to somebody. Like in a symphony, in an exhibition you want to have enough voices so that it becomes rich, and there are enough ricocheting ideas to begin to have meaning and relation.

GARTENFELD: In front of the entrance to the gallery you’ve installed a gift to your nine-year-old daughter. This is the only work in the show that involves a performative aspect—that is, which requires the presence of the peopes involved.

BLOOM: I got my daughter MaHong the hippest, most tricked-out bike you can get. She came out the Saturday before the opening, her birthday, and she opened it in the gallery. She made a little bit of mess. So much of my work until recent years was based on intrinsic absence. It traced things. And having a kid, you are inevitably more involved with presence. The show is a celebration of being here.

GARTENFELD: An exchange of gifts between Jean-Paul Sartre and Simone de Beauvoir (An existential Gift

of the Magi), 2010, (pictured left, courtesy Tracy Williams) is interesting on that account, because it imagines the gift of keys between the two figures, who famously never shared an apartment. What role does the object play in that case?

BLOOM: Sartre went to Berlin and had an apartment there. Bruno Latour devoted an entire text to the keys of Berlin, which arre very particular because the door tells you that it has to remain closed and locked in order for you to be able to retrieve your key. The object tells you what it has to do. I remember the first time I had to deal with the key: When I had a DAAD in the 1980s, they gave me the key and it was this incredibly, strange beautiful thing. I remember standing at the door of my new apartment for an hour and a half until I figured it out… Anyway, so Sartre gives her that one. Supposedly, Simone de Beauvoir was friends with the carpenter who built Duchamp’s double door, and which inspired the frame for Etant Donne and so she gave Sartre a portable version of the door that opens and closes.

GARTENFELD: The work’s subtitle alludes to The Gift of the Magi, the story of the couple in which the wife gives up what the husband prized, and vise versa. Is that an element of your interpretation of the story of Sartre and de Beauvoir?

BLOOM: It’s more that each had in their libraries copy of that book. And for me, there is always an autobiographical element to the work. My husband and I live in a house where we actually have two apartments. People are always asking if we’re going to break it through and join the apartments. No, never. We have two different types of living—messy and neat [LAUGHS]. But that piece began because I wanted to create a gift exchange between the two of them, because they had such a complex love-life, and life together.

GARTENFELD: There are a number of offerings throughout the show, which struck me because offerings could be compared compared to gifts as representations. Additionally, the Buddhist offerings you’e showing here are paper effigies.

BLOOM: There are the shoes and the birdcage [both titled Offerings (Spirit Money), 2010, detail left], which Buddhist offerings. They are not effigies, they are offerings. There is a whole tradition—not only in Buddhism but also in

Hinduism—of giving objects, money, food, offerings of things that people in this lifetime enjoyed, so they can be experienced in the afterlife.

GARTENFELD: There is a ritual aspect to offerings, as they are burned. There is also an element of either evaporation or alchemy in that destruction of form.

BLOOM: I don’t think I will burn the, but I might … I’m not a believer but I find that incredible beautiful that you would. The paper birdcage was an incredible labor of love that took probably longer to make than anything else so…. And that’s that offering.

GARTENFELD: The theme of the secret, a type of restricted communication that is also quite generous because it creates such singular knowledge, runs through this show. In fact, there’s a work that a secret, and belongs only to you.

GARTENFELD: What’s the appeal of the secret? Is it the ability to reel people in, and really examine an object?

BLOOM: It’s more about understanding how much of an object is circumscribed. The rumor and the gossip and the talking and the… how much that takes place in understanding what we understand about artworks. Not what you are seeing yourself but what you’ve heard about it or what someone has told you, or the secrets that only you know or the economy of insider information and the levels of insider information. I can just say it’s about somebody who I was very close to at one time and no longer am close with.

GARTENFELD: The final piece I wanted to discuss was Freud’s Ring I, which involves a single white lounge chair among a circle of sofa-shaped rugs. On the sofa’s head is an intaglio ring, like those Freud gave to his followers. I wondered if this was a re-presentation of the gift Freud gave his descendants, or a critique of the multiplicity of Freudien interpretations.

BLOOM: There is a lot of writing about Freud’s passing on of his legacy and for me these gifts come with such great responsibility, and incumbency. I love objects or artworks that also carry with them the necessity of maintenance; that’s why we all love Felix Gonzalez Torres, because you take an element and then you become responsible for it.

GARTENFELD: Memorable as his fundamental tenants are, the subtleties of the Freudian legacy is notoriously hard to maintain. Did he feel towards the end that that responsibility was being dealt with responsibly?

BLOOM: Originally I imagined the ring as Freud’s gift to his disciple Lou Andreas-Salomé because she’s such an interesting character. The more I read about his gifts and the other people I realized that it was actually his ring—he called it “his” ring. The secret ring. Interestingly, in the beginning he gave rings to a number of men, but toward the end a lot of women helped him: Marie Bonaparte, his daughter Anna, Lou Andreas Salome, each got a ring. He needed a group of people who he could trust to carry one the name of psychoanalysis because there was a lot of feuding, and so he basically bestowed all this stuff on his daughter, who was not necessarily equipped. It’s beautiful and tragic that she would to be the person to take over the legacy of the Freud where she wasn’t really the most brilliant or the most… but he trusted her.