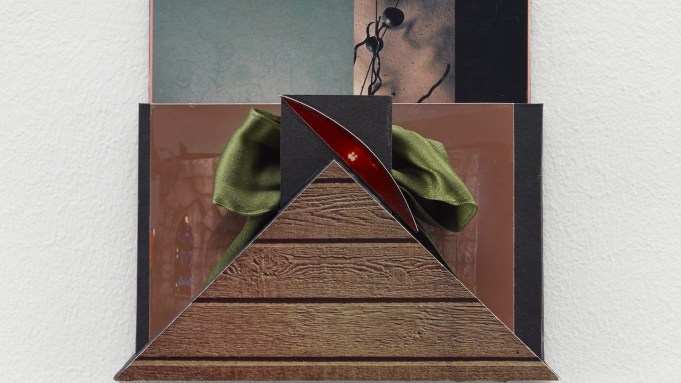 It’s been five years since Vincent Fecteau, an artist known for painted abstract sculptures that simultaneously suggest bits of architecture, crumpled machinery and cubist forms, staged his last solo show in New York. Now, he’s back with an exhibition at Matthew Marks in Chelsea (through June 28), presenting new sculptures made of painted epoxy clay and his first 3D collages since the 1990s, which combine found materials and the artist’s own photographs. Fecteau, 45, spent the interlude exhibiting abroad, at galleries like London’s greengrassi, and participating in high-profile U.S. group shows, including the well-received 2013 Carnegie International in Pittsburgh and the 2012 Whitney Biennial.

While some of these exhibitions featured Fecteau’s recent experimentations with wall-mounted sculptures that can be reoriented to hang facing different directions, this new body of work represents a distinct line of visual inquiry: for the first time, Fecteau has cut into the walls behind his sculptures so that certain sections can recede more deeply. The cavities, while not immediately apparent to viewers who aren’t looking closely, intensify the works’ complex relationship to depth and the space around them. These sculptures emerge out of a dynamic, relentless process of addition and subtraction, and perhaps it’s this mercurial approach that makes them appear as though they could metamorphose at any minute, their angles suddenly shifting, their volumes folding into voids.

Fecteau, who lives and works in San Francisco, spoke by phone with A.i.A. about his new work, the late sculptor Ken Price, and why he can’t watch scary movies.

ZOË LESCAZE The sculptures in your last show at Matthew Marks were all displayed on pedestals. This exhibition consists entirely of wall-mounted work. Can you talk about what’s happened since that last show, specifically in regard to making these hanging sculptures?

VINCENT FECTEAU I’ve always been interested in bas-relief, but I don’t understand how it’s done, which is probably why I’m very attracted to it. I just don’t know how someone makes something that condenses space so dramatically while still maintaining a distrinct sculptural presence. I was interested in seeing what would happen when I tried to push sculpture back a little bit more toward painting.

LESCAZE How do you see your new collages relating to the sculptures? Many of them contain images of buildings, or parts of buildings.

FECTEAU The images come from several sources: some are images that I’ve made, some are found photos from thrift stores and others are elements from magazines that I clipped years ago when I was very involved with making collages. The images I’m most often attracted to are those of architectural or domestic spaces. Although they look very different, are materially very different and the process of making them is very different, I feel that the sculptures and collages actually tickle the same part of my brain. They just come at it from different directions. I know they look very different, and the materiality is very different and the process of making them is very different, but what they’re talking about for me is the same thing, basically. I was working on them at the same time and thinking about very specific moods and feelings. The collages have a very specific mood that I was interested in exploring in the sculptures.

LESCAZE Can you describe that mood?

FECTEAU I might describe it as melancholic. I’ve been told that the sculptures feel sort of seedy or creepy, which makes sense to me. They’re sort of darker, and to me they describe spaces that are very interior.

LESCAZE There’s something unsettling about them. The way they make familiar, nondescript architectural elements feel menacing reminds me of David Lynch’s films.

FECTEAU It’s weird that you mention David Lynch, because someone recently told me the show reminds them of Lost Highway. I can’t watch his films—I get way too freaked out. I’m not a scary movie person at all. I just can’t do it. To me, it’s amazing there’s some sort of pleasure in it for people, because I’m just horrified the entire time.

LESCAZE You were saying earlier how you don’t tend to think in two dimensions, but these collages are fairly flat. Can you talk about working in this mode versus sculpture?

FECTEAU It’s a very different way of working. The collages are more about happenstance. It almost feels like I have to wait for them to happen, that they make themselves. I realized while I was doing these collages why I had stopped working this way years ago. It’s incredibly frustrating, because the solutions are not arrived at through a direct manipulation of material. On the other hand, the sculptures are completely hands-on. There’s not a lot of sitting back and waiting and looking. It’s more a process of working directly with the material and reacting. If something bothers me I change it right away and just keep on going and going until something sort of settles in and it gets to a place where nothing really irritates me anymore.

LESCAZE How do you know when a collage is finished?

FECTEAU It really is about producing a feeling of oddness and rightness at the same time. The pieces need to feel like they couldn’t be any other way, but that they still have a strangeness to them. That there’s something off about them.

LESCAZE There are Ken Price shows at the other Matthew Marks locations on 22nd Street. Do you see your work in conversation with his?

FECTEAU I think there’s a very clear formal language that we share. I totally understand people’s comparisons, but for me, the more likely touchstone would be someone like Ron Nagle. There’s a sinisterness to Nagle’s work that I sympathize with. And also I think that Nagle relates to space in a way that I really identify with. Some of his pieces have a stage-set quality that probably really influenced some of my thoughts about reliefs and the compression of space.

LESCAZE You currently have a sculpture on view at Philip Johnson’s Glass House in New Canaan, Conn. It’s the latest iteration of curator Jordan Stein’s rotating exhibition, “Night (1947-2015),” which is about an Alberto Giacometti sculpture that mysteriously disappeared from the coffee table there. Can you talk about that?

FECTEAU I actually ended up making three sculptures, which will be on view successively over the four months. When I was working on them, Jordan was asking me if I was thinking about the architecture of the house, and I realized I wasn’t thinking of the modernist shape. I was thinking more about Johnson and David Whitney [Johnson’s companion and an art collector] as a gay couple living in this house. Periodically over the years I became interested in making some very small sculptures but was always worried that they would end up looking like tchotchkes. But now I thought, “Well, now I’m basically being invited to make a tchotchke, to sit on a coffee table.” I thought about something I would bring to them if I were visiting the Glass House, not something that they would want, but something I would want them to want: the complicated psychology of a housewarming gift.

FECTEAU If I were a different kind of person, I could have researched the original sculpture, but I’m not like that. I often felt that I didn’t approach things the right way, especially coming of age as an artist in the early ’90s, when a certain type of theoretical rigor was considered necessary. But it’s just not the way I make things. I have this friend who once said to me, “You know, you’re not an intellectual artist,” and at first I was so horrified and offended. Then I realized that he was right and it was so freeing. I’m not that person, and I will never be, and that’s okay. It sort of allowed me to let go and embrace another, more directly intuitive way of thinking about things.

UPDATE: This interview has been modified since its original publication. The artist amended some of his answers by e-mail on June 3.