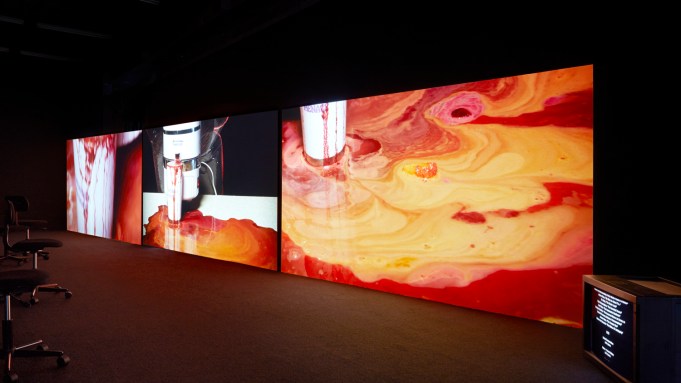 A.K. Burns, an artist known for collaborative working methods, queer-feminist activism and intuitive processes, premieres A Smeary Spot at Participant Inc. (Sept. 13-Oct 18). The four-channel, 53-minute non-narrative video installation, shot in the desert of Utah and in a black-box theatre, is the opening installment of an umbrella project titled “Negative Space.” The series will include additional videos, sculpture and drawings. Negative space is the formless matter under, between and around a formed subject, often considered passive or background to the positive image or figure. Burns’s video, which she calls a poetic manifesto, recognizes negative space as matter with agency. Burns spoke to A.i.A. about her project of reorienting vision, perception and space from polarizing binaries—positive and negative, outside and inside, object and context—to emphasize horizontality.

RISA PULEO The title, A Smeary Spot, is a taken from Joanna Russ’s 1977 sci-fi novel We Who Are About To, in which “that ordinary sun up there” becomes “that smeary spot” when seen from billions of light years away. With a title like this, it seems your project takes on the ambitious task of reorienting our heliocentric conception of the universe to one in which the sun is one point of light among many in a cloak of darkness. What role does speculative fiction and speculative realism play in this work?

A.K. BURNS I would say this work sits near the intersection of speculative fiction and speculative realism. A Smeary Spot is heavily guided by feminist theorist Karen Barad. Holding a PhD in quantum physics, her cross-disciplinary analysis is steeped equally in science, queer theory, feminism and new materialism. Her writing approaches the world with a metaphysical weirdness that I deeply relate to, and my conception of negative space is definitely influenced by Barad’s thinking on the void/nothingness.

In Barad’s theory of “agential realism,” the world is made up of phenomena that “intra-act”; all matter is active and exists on a continuum of becomings and transformations. People are born, age and expire; objects are “made” and “used”; and the earth experiences seasonal shifts, “natural disasters,” and is manipulated by human will. The only thing we can rely on is that everything changes. It’s just that everything changes at different speeds or scales. It’s this difference in scale that makes things seems more or less permanent, definable, determined and valuable. The limits of human perception and our egos really fuck up our ability to act out our potential synchronicity with other matter. Through this premise, I propose a speculative present, to rethink the world as we think we know it. And another present sets the stage for other futures.

PULEO  In addition to shifts in scale and time, A Smeary Spot suggests reorientation from outside to inside, external to internal. In the opening monologue, the character Mother Flawless Sabrina says, “Let the emptiness speak for itself.” This seems to be a feminist-materialist reversal of Enlightenment philosophies, implying a shift in ways of knowing from the objective position of a detached observer to internal positions, which could include intuition and embodiment.

BURNS Yes, but I’m interested in a reorientation that is against moving from one binary to another. I wouldn’t say this work privileges the interior position, rather I’m interested in removing the “primary” in binary relationships.

The performers in this work represent actions or verbs, not subjects or nouns participating in a narrative, like they typically would in cinema. The performers are symbolic representations of phenomena, what I call “acting agents.” For example, in A Smeary Spot, there is a group of performers called the Free Radicals that represent both unstable molecules that set off chain reactions and wandering activists who seek out situations to agitate for change. The other acting agents include a Shape-shifter, Re/Productive Labor, a Clairvoyant Psyche, and The Ob-surveyor—a conflation of the act of observing and land surveying. Theses acting agents operate like energy shifters, while the matter that makes up the material world are what I call “persistent actors” and are more like the protagonists: the landscape, the junk pile, the water, the theater and the props.

PULEO Your project is also a meditation on landscape as a metaphor and the realities of the landscape in Utah. When did you first go there and what did you find there that drew you back?

BURNS I first visited southern Utah in the mid-‘90s on a cross-country road trip. On my first encounter I was struck by the landscape; it was like nothing I had ever seen before. I returned in 2012 with my video camera intending to explore it more, with an itch in the back of my mind to create a quasi-science fiction work. One experience after another made the bond between this site and this project inevitable.

While in Utah we camped and worked on public lands, which are lightly regulated and can be occupied without cost. This “free” territory quickly became, for me, a physical manifestation of negative space. I saw this idea of a space, where there is no property and no entrenched systems of value, as a site full of potential. But it should be recognized that this is a strictly metaphorical  “utopia” as public lands are inextricably bound to our national history of violence, invention of borders, immigrant and native rights.

When I first arrived at Lake Powell [Utah] it seemed strikingly surreal. After some research, I understood why: because it is a human-constructed landscape. The lake is a reservoir resulting from the construction of the Glen Canyon Dam in the late ‘50s when a massive canyon was submerged under nearly 500 feet of water. The canyon itself is a negative space, as is the water that fills it. Water is formless until it is contained in some fashion, and the dam sets up a relationship between fluidity and containment. Later on I began working in a black box theater because of its visual illusion of infinite space—it appears like a void, another site of continual potential becoming.

This push and pull between fluidity and containment symbolically plays out in numerous ways in the video. Chelsea Manning’s military jacket, for example, is a prop that nods to both information leaks and leaky bodies-trans bodies and bodies that don’t conform. The jacket is kept inside a garment bag used to catch vegetable pulp from a juicer. The juicer transforms matter from solids into liquid and points to the ways that health food culture, which is marketed as a way for people overtaxing themselves to maintain pace with capitalism can achieve “balance.” Ultimately the excess juice becomes a marbled visual field similar to the desert lands. So many elements in the video were gleaned from or built upon the landscape, both a site of celebratory potential and negotiated commodity.

PULEO Playing with tropes and language is an important part of your practice, newly highlighted in the script for the video, included in the installation as a poster. Can you speak to the relationship between language and images in this work?

BURNS There are several forms language takes in A Smeary Spot: the recitation of texts, site (desert and the theater), props or material goods, and the action-gesture-movement of performers. Each type of language folds into the other and complicates the signifiers they offer individually.

For example, in a scene shot inside the black box, Jen Rosenblit (in the role of a Free Radical) applies what appears to be a mud facial in thick excess while she recites T.S. Eliot’s The Waste Land. This sets up a conversation between languages: the necessity of body maintenance, when necessity becomes luxury and when luxury becomes entrapment. This scene is shot close-up and paired with panning view of Lake Powell, evoking a materialist collapse in scale and value between body and landscape.

In another scene niv Acosta (another Free Radical) goes through an energy shift and enacts a liberatory dance on the crest of a land mass, threading lines between the free radical as a molecule and as a radicalized body tied to a queer historical narrative. Through the act of flagging, niv asks to be visible. But visible to whom? niv’s character is energy/matter so the flagging courtship occurs between him and the elements: land, water, sun.

PULEO A Smeary Spot is your first large-scale solo endeavor after a series of collaborations, like Community Action Center with A.L. Steiner (2010), Brown Bear (2010) and The Poetry Parade (2012-present) with your partner Katherine Hubbard, the artist advocacy group W.A.G.E (Working Artists and the Greater Economy), and Randy—a publication made with Sophie Mörner of Capricious and Clark Solack. How does your process change when making work alone instead of in collaboration?

BURNS I think I am temporarily burnt out from large-scale collaborations. I believe in collaboration fundamentally and politically, but it’s also really important to be grounded in one’s self. I also recognize that so-called “solo” artists are gleaning from their peers and from society in numerous ways; nothing emerges from a vacuum. “Good” artists are just better at making what they steal appear unique or personalizing what they borrow.

A Smeary Spot is made up of four channels, three looped and synced, with a fourth dedicated to the credits. This channel is more comprehensive than most movie credits and is where I introduce my own language around the work and sources. Cinema is one of the few mediums that make the group effort explicit. Can you imagine if artists’ assistants, interns, stretcher builders, gallery support staff, the muse, the person who ghostwrote the press release so the work sounded smart enough to value, were credited in painting shows, instead of just the artist?

Also, Katie [Hubbard] and I traveled to the desert together. As I was developing this work, she also started a powerful series of photographic works and a performance-lecture. While we make very different kinds of work, part of our deep love is our shared critical engagement with the world. In the desert, I spent time documenting her documenting herself and the land, which became a kind of meta-narrative about the role of the camera, the construction images and thereby, the construction of a speculative world, culminating in her role as the Ob-surveyor.

Additionally, I directed this video by asking the performers not to “act,” but act as themselves dealing with a prop, a task or a recitation. I am very interested in remaining in process as long as possible. I make specific choices as I go, but these choices rely on a set of inquiries, experimentation, impulse and intuition. Editing is where I make concrete choices and really compose the work. This is also the most solitary part of the process. A title like “situation coordinator,” “composer” and “editor” make more sense to me than “director.”

PULEO What can we look forward to in the next installment of “Negative Space”?

BURNS There is a book in the works, to be published by Dancing Foxes Press. I’ve asked writers to create fictional or poetic essays in response to different themes within the project “Negative Space”—water, land, body, the void—rather than critical essays. Texts will be paired with process work related to the videos, as well as documentation of related sculptures and drawings. I’ll also shift gears to work on my next solo exhibition at Callicoon, which will showcase drawings, sculptures and other material output related to A Smeary Spot.

Bombardier Unveils the Fastest Business Jet in the World , Its New Global 8000 Flagship