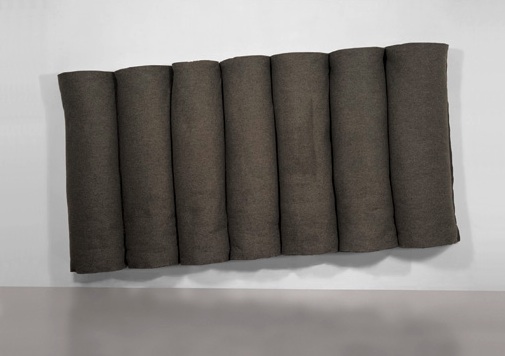 In 1980, Benjamin Buchloh published “Beuys, Twilight of the Idol,” criticizing the artist’s public, didactic and even messianic-style performances as symptomatic of a new post-war German identity built “by pardoning and reconciling itself prematurely with its own reminiscences of a responsibility for one of the most cruel and devastating forms of collective political madness that history has known.” The piece determined the reading of Beuys’ work through his personae, ostensibly reading the former as artifacts of the latter—without, perhaps, a significant study of the self-consciously fragmented nature of any documentation.

Make the Secrets Productive, currently at The Pace Gallery, devotes two rooms to three decades of free-standing sculpture—works that see formal interventions into the minimalist idiom and the vocabulary of war; works which are heavy and bodily while doubled or serial. With a mind both to the unfamiliarity of Beuys in an American context and the extent to which even familiar viewers know of the artist by his myth, the gallery’s back rooms includes hour upon hour of video documentation from Beuys’ perfomances and lectures.

The title of the show comes from a 1977 manifesto, Jeder Mensch ist ein Künstler (Make the Secrets Productive), on view as part of the show, whose title translates, “Every person is an artist.” In his contribution to the catalogue Joachim Pissarro compares Beuys with Andy Warhol for their respective approaches to the mundane in art. But if Warhol’s allowed to have humor, and his work exists in sometime opposition to the personal image he cultivate, why not Beuys? We asked the show’s curator, Pace Gallery director Birte Kleemann, about the absurdity of capturing all of Beuys—or any person—in an artwork, and the political ramifications of that humor.

ALEX GARTENFELD: When The Pace Gallery would decide to do a historical show of the work of Beuys, why were you the person to curate it it?

BIRTE KLEEMANN: For one, I’m German and I come from the same region as Beuys, who was born in Krefeld but always said he was from Kleve, close to the Dutch border, because this is where he grew up. So I have a natural take on his use of language, and his sense of humor.

GARTENFELD: What types of humor were you looking to recover with this show?

KLEEMANN: His artworks often have straightforward titles—Doppleaggregat (Double Aggregate, 1968) or Tisch mit Aggregat (Table With Aggregate, 1958/1985) both describe what they are. He defines the works as what you see and what you get, but of course it’s deadpan; it’s much more. It’s a set of mythical doubles set to energetic coils

When he got politically engaged, Beuys did a concert with a punk rock pop band in Cologne called BAP and their song was called “Sonne Statt Reagan” (“We want to have sun instead of rain”). It was a play on words with real underlying significance, saying you could have “Sonne” [Sonne] instead of “Ronald Reagan.” I don’t think he wrote the lyrics himself, but he initiated by asking the band to record. There were a lot of political activities that show a sense of humor.

GARTENFELD: Based on the issues of translation you bring up, is there a difference between the American and the European or German perception of Joseph Beuys? His is a name people know, even if they don’t know the work or only they know the myths [that he crashed his plane during World War II and was healed by Tatars, and refused to join their tribe]. In an academic context, discussion generally follows from Benjamin Buchloch’s criticism of his affectation of the shaman persona, but do you think that accurately describes how Americans perceive Beuys’ work? LEFT: INSTALLATION VIEW. COURTESY THE PACE GALLERY.

KLEEMANN: It’s definitely very different, although in Germany Beuys was also sometimes critically received. But there was a common understanding that he was an outstanding artist, so he never had the reception that he had here with people like Buchloch. On the other hand, during his lifetime, among artists, Beuys was already well received in the US. Artists like Eva Hesse and Robert Morris and Andy Warhol knew each were interested in, and had different interpretations of, his work.

But of course [reception in the US] is something we focused on. That’s why we included so many films, so that if people wanted to they could take the time and listen to original footage of Beuys, starting with documentation from as early as 1964.

GARTENFELD: There is a focus on career-ranging sculpture here, which are pronouncedly singular works, rather than the more ephemeral documents to the performance.

KLEEMANN: We did not include drawings, which were really important in Beuys’ oeuvre, or multiples. We wanted to show unique pieces and include very early pieces, which inaugurate a vocabulary for him, which is an artistic one.

GARTENFELD: To what extent do you see Beuys’ approach to creation as philosophical? The critique is often that the performance, and the self-proposed authority to create, is not philosophical, or epistemological, but rather that it’s distraction.

KLEEMANN: It’s philosophical. The critique comes in whenever Beuys takes on the idea of the shaman or the magician, and he always stressed that it was a metaphor.

GARTENFELD: Do you see an awareness or distance in the videos you have on view?

KLEEMANN: You see that in the videos, and there is a lot of writing that we have in the catalogue. But Beuys had a very holistic idea, that you have to bring everything together, the organism has to work as a whole and then we can heal society. He says that with a new, aware society we could create something new, to cause the human being to come into life; he says we are not there yet, that we are in an in between form, that we first have to create.

GARTENFELD: Your show comes at a moment when a lot of people are looking at the legacy of Beuys, which certainly wasn’t the case for a very long time, but which began with the show Eugen Blume [whose writing is published in the present catalogue] did in Berlin at the Hamburger Bahnhof.

KLEEMANN: When Beuys was alive, he was just alive. There is this voice. With his death that changed. But Germany has had to do their homework and look at Beuys again. It’s not only that there hasn’t been a show in the US in such a long time; it’s the same for Germany. LEFT: JEDER MENSCH IST EIN KUNSTLER (MAKE THE SECRETS PRODUCTIVE). ©2010 ARTISTS RIGHTS SOCIETY, NEW YORK/VG BILD-KUNST, BONN

GARTENFELD: Are there any political or economic themes that now augment a reading of Beuys?

KLEEMANN: Beuys was so politically engaged, which to this day—especially now—is bewildering for people in the art world. Maybe his artwork was not seen as much recently because it was a political engagement. And those structures, for art to politic, still aren’t in place.

Everybody knows Beuys, but they don’t really know Beuys. On the other hand, he had people who loved and supported him, his dealers and collectors, but it was a pretty selective group. When Beuys planned to plant 7000 Oaks at Documenta 7, in 1982, it wasn’t easy to get all those trees planted. It took five years, and Beuys did an action to raise money, which was was the melting of a crown of Ivan the Terrible recast as a small gold rabbit (which was then bought by collector Joseph W. Fröhlich). The next Documenta was in 1987, and his son planted the last tree. That’s different in our art world today;there would be capital and structural support for an artist working on a project like that, from the get-go. There’s no way that would take five years to complete.

GARTENFELD: We’re also coming out of a very apolitical Whitney Biennial, but a moment in turn where museums have initiated countless education programs that are lyered on top of the art. Do you see this show as in dialogue with any works that are thinking about what it means to be political in the space of a contemporary artwork.

KLEEMANN: Definitely. Beuys is an artists’ artist. The Bruce High Quality Foundation and Terence Koh refer endlessly to him. Beuys is really coming back, but through the artists. Not through the museum collections—it’s the artists who have picked him up and ended the secret.

MAKE THE SECRETS PRODUCTIVE IS ON VIEW THROUGH APRIL 10. PACE GALLERY IS LOCATED AT 534 WEST 25 STREET.