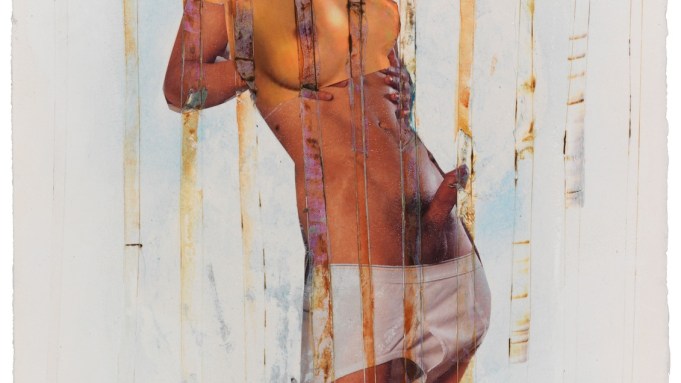 Over the last decade Bianca Casady has been best known for the hypnotic, folksy, hip-hop music she writes, records, and performs with her sister Sierra as part of the duo CocoRosie. On stage they cloak their startlingly charismatic beauty under outré makeup and outlandish costumes. Casady visually transposes themes of captivity and servitude from lyrics to a recent song into her first solo exhibition at Cheim & Read in New York, “Daisy Chain” [through Sept. 8]. The song’s refrain refers to the “Jingle Jangle” sound made by chains worn by prisoners walking in the country.

Suites of her airy, figurative collages and paintings on white paper lead to the artist’s dense, tactile, mixed medium installation in Cheim & Read’s back exhibition space. In the main gallery, a collaged watercolor, SWAMP MONSTER (2011), depicts a man dressed in overalls standing between cutout strips of musical scores that form both a wooded landscape and the bars of a jail cell.

The artist’s last one-person show in New York, at Deitch Projects in 2007, alluded to her religious and drug-induced revelations. The subject matter in the current show shifts to transsexual autoeroticism, rural poverty and American prison culture. PRISON FAERIES 3 (2011), a collaged composite photographic nude figure with breasts and an erect penis and facial tattoos watches a butterfly from behind bars.

A.i.A. spoke with Casady as CocoRosie prepared for a performance in London on the last leg of their summer European tour.

ANNE SHERWOOD PUNDYK You have been making music, art and videos for the last 10 years, and you’ve found ways to be powerfully expressive using just the resources on hand. For example, you use found materials in your art work, lo-fi sound effects in your recordings, and vintage clothing for your performances. What drives your esthetic?

BIANCA CASADY A term my friend Kembra Pfahler uses is “availablism.” There’s something about just grasping from what’s around you to work with. I also like working with limitations. I can focus more on content if I limit my tools and my materials. I am anti-technique in a way, but from experimentation our own techniques seem to develop.

PUNDYK You said in an interview on BeatCast TV after releasing your 2010 album Grey Oceans that you and Sierra “carry your creative world with you,” alluding to personal fantasies fundamental to your work. In “Daisy Chain,” a handwritten manifesto is nailed to the wall in the front gallery, which refers to being a prisoner unto oneself: “we’re doing time inside of our minds, on the inside the door is locked.” How do you communicate this protective fantasy world to audiences?

CASADY The protected, internal life is something we developed in our childhoods, which were transient and traumatic. In the creative life there is always a certain refuge and it is the most meaningful thing for us. It has continued to be that way into our adult lives. When we started making music together, momentum started to occur outside this creative world. The outer world started to respond and give invitation to our work without a lot of effort on our behalf. We didn’t really seek an audience, but we met those invitations very enthusiastically. It wasn’t really our ambition to have an audience, and it hasn’t posed any threats on our inner world.

There’s a very easy harmony in having that kind of removed world and still being able to share it. It’s metaphorical and it’s also quite literal. We don’t live anywhere. We don’t own anything. We have maintained this out-of-place way of living, and it’s entangled with our creative process. I had no interest or ambition towards the art world. It felt like a very faraway, elite place that was hard for me to make any connection to. Music has a lot less of that elitism, and it’s music that has somehow brought about these other projects that have started to engage the art world. So for me, CocoRosie, as a music-based project, has been a strange compass for a lot of other kinds of work, relationships and opportunities.

PUNDYK Thematic currents crossing through the art forms you work in include the power of memory, the natural world, ghosts, past lives and the residual effects of negligence, servitude and abuse. What subjects are best suited for expression solely within the visual arts? For example, in “Daisy Chain” you use explicit images of autoeroticism within a context of captivity.

CASADY Everything often starts with text, writing and poetry, but I think it’s a lot more impactful to use images when dealing with the theme of autoeroticism. They have a certain charge to them, and using the power of these certain charged images—re-contextualizing them and destroying them as well is important to the story. The topic of race, for example, has become so congested with language. That is definitely something I see a lot in my visual work. Also, a lot of political issues, gender and religion have an availability in the image world. In a way, there’s more freedom there, it’s not as statement-based as language and writing. Representing the subjects as images that are already familiar obscures them in some way and they are seen differently.

PUNDYK In “Daisy Chain,” a spare hanging of large pale-toned works on paper, such as SHIPWRECKED CLOUDS COME WEARILY A WANDER (2011) in the two front galleries, contrasts with the work in the back gallery, which features a jumbled domestic framework of worn antiques, broken objects including china, chipped teeth and photographs in recycled frames, along with the video and its audio track. What does this division represent?

CASADY I wanted the back gallery to be oppressive and confrontational, with a lot of things coming at you. The collages and smaller works tend to be condensed versions of the larger works in the front spaces; the raw seeds for the larger works, which for me have more breathing room in them. I wanted to utilize the luxurious, larger galleries for a windy atmosphere around those pieces. By the time they became large on the paper a lot of the ideas became more open and cathartic.

In the back room I was looking at family and domestic life as a kind of prison. Even the simple striped wallpaper is a certain reflection of the prison bars, and that room is more about delving into the subconscious, and into memories and family history, in a way that not everyone wants to do. Everything in that space is exposed, even the objects and things on the ground. It was inspired by a certain beach, an old landfill where everything that was buried is surfacing. That’s something I was thinking about a lot in the past year—the resurfacing of buried secrets and family shame.

PUNDYK Your music videos, starting with “Noah’s Art” (2005) through to this year’s “We are on Fire,” have become more narrative and more technically sophisticated. Is there a momentum behind the evolution in your work?

CASADY Definitely. I feel that our project is expanding beyond the music industry. We’re going to be doing the music for the director Robert Wilson’s production of Peter Pan, to be performed next year by the Berliner Ensemble, and we are starting to work on the score. Recently I directed a dance piece for the first time. It was called “Night Shift,” and was staged at the Kampnagel Arts Center in Hamburg. I had a really strong sense that it was the beginning of a very new kind of work, and I feel like there’s huge momentum, but it feels very free because it’s not depending on traditional institutions, such as record labels, that can kind of pull people down.

Our work has grown in a very organic way. Not being some overnight success, we’ve had a very healthy, organic building process. It’s a very real thing, especially with the live audiences and touring around the world. One of our favorite things to do is tour, and we’re at the end of a monthlong tour with a five-piece band, the Rajasthan Roots, from India.

PUNDYK As you are beginning to work in these new formats, are there new themes that are important to you, too?

CASADY At the moment, we’re involved with a group called The Future Feminists with Antony Hegarty and Kembra Pfahler. We’ll be meeting up in London tomorrow for the Meltdown Festival, which Antony has curated, mostly with female artists. It’s a multimedia project, but right now it’s more in the stage of starting dialogues—mostly feminist dialogues. We are talking about needing to make dramatic shifts towards the feminine. It’s a crucial world issue affecting many things, including the environment. We all have very different approaches, we’re really different personalities. It’s a daunting dialogue to start. Again, it’s language that is a huge weight and barrier within the culture of feminism. One of the most interesting things to come of it is that several female artists are no longer calling themselves feminists, which I find kind of defeating in a way. I’m kind of putting my foot down. [Laughs.] I don’t feel like softening the term.