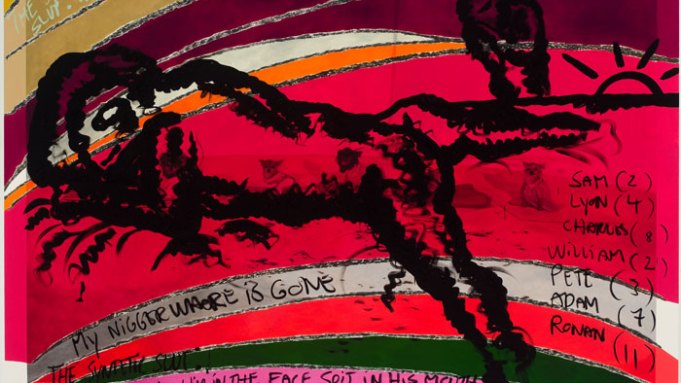 Describing the work of Norwegian artist Bjarne Melgaard, it’s difficult to avoid a manic, rambling inventory of the materials and images used in his paintings and installations, which, in the case of “The Synthetic Slut: A Novel,” currently on view at Greene Naftali, range from huge painted enlargements of 70s nightclub snapshots and nature photos of the duck-billed platypus, to a rack of rumpled Maison Martin Margiela suits and half-human marble figures caked in impasto and littered with abject photographs from the Serbian War and beefcake portraits of the artist. As his assistant for the past two years, I’ve helped him turn out the big brightly-colored canvases, cute animals, and piles of pricey stuff (furs, medical waste), trimmed with the gorey imagery and unsettling yarns that have been Bjarne’s trademark since the 1990s, when his career in Europe took off with an early solo exhibition at the Stediljk Museum, Amsterdam. That also makes me something of a trimming, in Melgaard’s aggressive interpretation of the relationship between artist, artwork, and art apparatus.

“The Synthetic Slut” filters Bjarne’s pseudo-confessional approach to painting and materials through a patently gendered literary expression of desire, rediscovering them with the force of his own attractions and roving fascinations. Written across Bjarne’s oil paintings and the scraps of paper that he scatters and tapes on objects, voices recur, written thick and bold and without grammar. At Greene Naftali, chunks of large text in multicolored vinyl begin in the main entrance hallway floor and wallpaper the gallery, with paintings hung on top of them. Bjarne calls it a “multifunctional novel,” a neverending non-sequential epic that can be re-used and repeated, which in its compulsive longings and blunt accusations is influenced by the outlaw forms of 1980s writers Kathy Acker and Jane Delynn, who were known for inventing wild, distinctively female subjectivities.

KAYLA GUTHRIE: So, the title of your show: who or what is the Synthetic Slut?

BJARNE MELGAARD:Â I don’t think the Synthetic Slut is a person or a specific personality. It’s more an attitude, relating more directly to what you see and how you experience things. It is this idea of playing with the personal without it reallyÂ beingÂ personal.

GUTHRIE: Where does the idea of the artist or artwork as a slut or a pig come from for you?

GUTHRIE: The found objects you choose are generally conspicuously luxuriousâ??jewelry, furs and perfumes. This show has marble sculptures hand-fabricated in Italy, a top-of-the-line HÃ¤stens bed, and a custom saltwater aquarium. How do these elements “observe” you?

MELGAARD: In this show specifically, when I used luxury objects it had to do with trying to escape this idea of an innocent readymade, a trivial object being transformed by the artist. I want to counter this working-class sentimentality of everything is best when it’s the cheapest possible.

GUTHRIE: “Working-class sentimentality” is a phrase that you use in the text on the floor of the hallway at Greene Naftali. What do you mean when you talk about class and what does it have to do with art?

MELGAARD: The notion of class is something I never thought about before I entered art school. I’m absolutely not interested in any kind of sentimentality or belief that the working class has a more pure take on art. In the art world, you have a lot of upper-middle-class kids, especially in Europe. I think it’s really weird, these ideas of Marxism that you learn that are filtered through art theory. I don’t understand how people can believe in that today.

But returning to your question, I think it is more about specific objects than expensive objects. When it comes to appropriation, I think more in terms of borrowing from my own work: earlier work, later work, new work. For instance, when I tie a platypus around a marble sculpture, I’m putting together two objects that I’ve had fabricated.

GUTHRIE: But you’re not sentimental about these objects, even when they’ve been part of your everyday experience? This furniture in the show is actually brought in from your home…

MELGAARD: Yeah. I mean, yesterday I cut up all these Wittmann sofas after I was writing my novel on them, to make it a painterly gesture. It related everything from Lucio Fontana to slashing up something for no purposeâ??but also, to use your terminology, to escape from the sentimentality of the object. So it’s not so precious.

GUTHRIE: So although your stuff is the material, this novel’s not autobiographical?

MELGAARD: No. It is much more fictional. That I called the show, “The Synthetic Slut: A Novel” is very important… When you use a novel format, you kind of can escape this idea that you are supposed to have a kind of criticality around the work.

GUTHRIE: So for you is the novel an art form that has more freedom than contemporary art?

GUTHRIE: To you, has there always been this relationship between painting and the sculpture and installation like we see in this show?

MELGAARD: Yeah. I definitely feel like the installation plays off the paintings and vice-versa. And even if I don’t do an installation, I think that the painting also relates to this traditional conceptual framework. But I like the idea of taking what’s around me, and just having it around me, and then somehow kind of transmuting that object, and bringing it into another reality.

GUTHRIE: When you talk about a traditional conceptual framework do you mean a certain history in particular?

MELGAARD: The styles of Arte Povera and Minimalism. I think this education is hard to dismiss. In the formal aspects of my workâ??composition, form, and colorâ??I think it’s really interesting to dismiss itÂ andÂ include it.

GUTHRIE: You spoke earlier about the innocence of readymades. In your imagery, you frequently juxtapose animals and children with violent text and photos, as if depicting them in a dangerous situation. Is that a conscious element in your work, to create a sense of fear and uneasiness?

MELGAARD: I don’t think you can decide what kind of reaction people will have when you exhibit your work. In terms of the images I chose for this show, I think it was much more about trying to reflect on what has been my source material for past works. The black-and-white photos of the boys, for example, I included because I did a series of paintings earlier this year that showed these same images in my earlier installations in the under-paintings. Choosing those specific objects or those specific photosâ??of course knowing that they make people uneasyâ??was more about relating to my own past and appropriating my own work.

GUTHRIE:Does chance or accident, or lack of control play a role in your work?

MELGAARD: When you put up an installation, there is an element of simply trying out things. You go by the feeling or kind of obsession. I am opposed to the idea of the artist that always has to know what he is doing, as if I have to know what I am doing so I am more adapted to market-oriented strategies. I am absolutely interested in market-oriented strategies, but I just want it to be a little bit more sophisticated.

GUTHRIE: When you were growing up in Scandinavia, was there a certain kind of idea of what it was to be an artist and what you wanted to express?

GUTHRIE: Has living in New York influenced you or opened up your possibilities as an artist? Does it make you look at things differently?

MELGAARD: I think it does. Here there is a certain kind of environment that takes art very seriously. That can feel very suffocating, but it can also be very liberating to have this kind of dialogue around art. For me New York is maybe more about other people in the art world. You can meet so many different people.

GUTHRIE: You’ve incorporated some collectibles from Supreme and SSUR into your new sculptures, and Krink graffiti pens, which you used before in the Planet of the Apes sculptures in your first New York show at Alleged Gallery, years ago. How did you start bringing the streetwear merchandise into your work?

MELGAARD: It’s more about taking what’s around you than relating to street culture. I am not interested in street culture at all. I think it’s much more interesting when people do cultural activities.

GUTHRIE: What is the meaning of the platypus?

MELGAARD: It was about finding a specific reference or a specific object that you can identify, that rematerializes in different art objects. I found the platypus sculptures as images on the Internet very accidentally, and then had each of them built as a super traditional sculpture. I like relating to the platypuses as I relate to my installations.

GUTHRIE: So the platypus is a traveler. But horrible things happen to him. In one gruesome piece, he gets hit with medical supplies.

MELGAARD: I think it is interesting how you corrupt your own work, in the sense of how you also corrupt yourself.

GUTHRIE: The text that appears in the front hallway and walls of Greene Naftali is a narrative about New York, which features all kinds of accusations and name-calling. And it seems like insults and abuse are constantly written into your work. How does negativity function for you?

MELGAARD: I don’t know if I frame it in terms of negativity, but I feel it’s a choice about how to reflect things around you. It’s a fictional text that also has its own literal references. I have been pretty influenced by the writing of Kathy Acker in this sense of being very direct, and also saying stuff that doesn’t necessarily have to be so considered. I think that’s a lot of it, writing down what you have in your head and then letting it be on a piece of paper. Kathy Acker was once asked in an interview why she portrayed women as being so weak and she said, “It’s because I never met any strong women.” Does she say that out of negativity? Or does she say that because there’s a certain freedom in what she says? Even for the women that she’s sort of criticizing. I don’t think it’s so much about negativity; I think it’s more about simplified language.

GUTHRIE: There is distinctly Serbian imagery throughout, and in all kinds of contexts: Arkan the Tiger, the Scorpions execution video. Is this a case like the platypus, a theme that pops up transformed?

MELGAARD: I had a Serbian boyfriend and I visited Serbia during that time. It seemed like a war without any consequence. There are no clear reasons why and nobody really tried to do anything. I wanted to look at those images and find them repulsive and at the same time, liberating. Then you can say, “What is liberation?” Whatever. Every liberation is just simple things that make us feel a little bit more up and going in daily life. I don’t know!

GUTHRIE: There’s a looseness to that strategy: you get an idea, you want to see what happens. Is there anything you won’t show?

THE SYNTHETIC SLUT IS ON VIEW THROUGH JUNE 19. GREENE NAFTALI GALLERY IS LOCATED AT 508 WEST 26 STREET, 8TH FLOOR, NEW YORK.