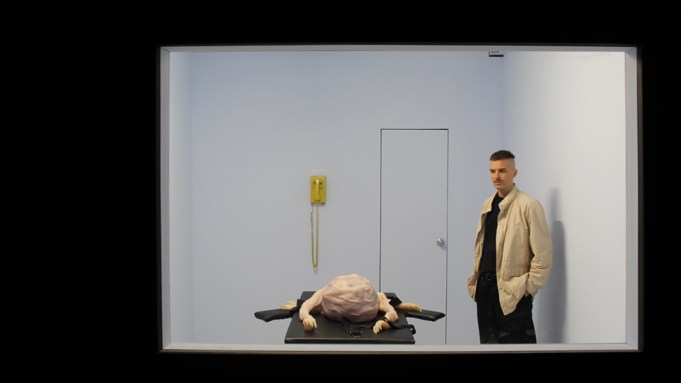 Bradford Kessler is a Kansas-born, New York-based artist whose performances and installations hint at the darker sides of Americana. His work is often theatrical, whether he uses prosthetic makeup or dramatic lighting, and laden with cinematic references. The Wizard of Oz is a regular touchstone for the artist, and his work often recalls the suburban drama of David Lynch. Become Gift, Sky Become Shadow, Kessler’s solo show on view at Interstate Projects in Brooklyn through November 3, comprises two new installations. Below, the artist discusses how the show is informed by a Wizard of Oz conspiracy theory, as well as a traumatic childhood experience of putting baby birds out of their misery.

I grew up in a tiny train depot town in the deep prairie of Kansas, with a population of six thousand, and thirty-one churches. We’d watch The Wizard of Oz in school every Kansas Day, which is January 29. It’s a hallmark of Kansan identity, even though it’s a Hollywood film. Become Gift is about an urban legend of an actor who played a munchkin in The Wizard of Oz and committed suicide on set. The story goes that the suicide happened unexpectedly—some say the actor was heartbroken. In one scene, Dorothy, the Tin Man, the Lion, and the Scarecrow are marching down the yellow brick road together. In the background, you see what looks like a silhouette of a hanging body. Everyone on-screen turns to look at it. It’s a very creepy moment. In 1939, reshooting was unthinkable. Color film was so expensive. Decades later, as technology developed and the film was restored, the studio masked the figure. They put a bird in its place. This seemed to affirm the conspiracy: why would you cover it up if there was nothing there?

I matched the color of my sculpture of the munchkin to the blue of the sky to reference this masking. The film is shot on a painted set, and the background is this unnatural twilight blue. I did the same for the branch and the wall, which match the greenish black of the trees in the forest scene. I thought of my sculptures as zooming into the silhouetted munchkin to render him in high definition, going behind the mask to see what’s really there—much like the way the Wizard is unmasked at the end of the movie. I made an anthropomorphic branch holding him by his neck as if to say that within the logic of The Wizard of Oz, which holds traces of the American dream, there are horrible tragedies. I was thinking more about timeless parables than current events.

The branch—which extends eight feet and supports the forty- or fifty-pound munchkin—is partially sculpted from silicone molds I took of a tree in Maria Hernandez Park here in Bushwick. The tree was chosen with dowsing rods, and to be honest, I was disappointed in the tree I was led to. So I tried again, but the rods led me there a second time, then a third time. I later realized it was the only dead tree in the park. It had been struck by lightning. It was definitely charged with weird energy.

Sky Become Shadow is about my first murder. It’s based on my memory of stumbling upon baby birds that had fallen out of a tree onto my driveway. I was maybe four years old, and in the summer heat, they were just sizzling on the asphalt, suffering. Using a baseball bat, I put them out of their misery. It was gruesome. When I saw the movie Boyhood [2014], I was struck by the scene where the boy is staring at a dead baby bird. I started realizing that lots of people have similar memories from childhood that they feel really ashamed of. So I made a dead bird the size of a child. I molded and cast my friend’s kid’s hands and feet, and then sculpted clawed bird toes onto them. The figure is made of peachy silicone, which gives it skin-like qualities. It lies on a padded table with straps in a room that’s bare except for a telephone. It’s an execution chamber, and the phone keeps ringing, as if someone’s calling with the pardon, but it’s too late. The figure has already been unstrapped from the table. It’s dead. The work is pretty charged, but I didn’t want it to come across as some sort of propagandistic manifesto. The Wizard of Oz doesn’t feel like that either, which is why its parables have been appropriated by religious people and atheists alike. That’s why it’s iconic.