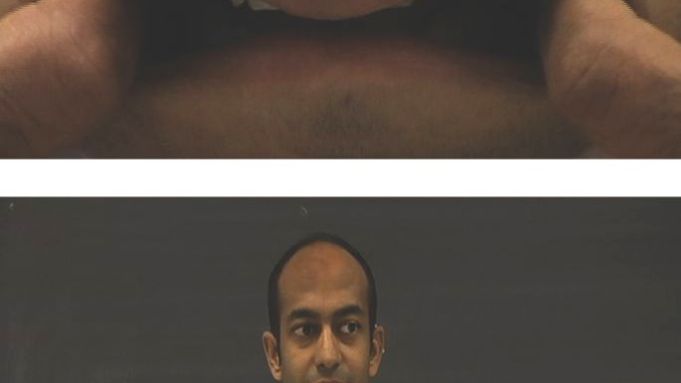 In his 4½-minute film Foe (2008), artist Brendan Fernandes addresses the camera nonchalantly as he reads and rereads a selected text from J.M. Coetzee’s novel of the same name. Included in the Guggenheim group exhibition “Found in Translation,” the film features an off-screen acting coach curtly interjecting; she instructs him on how to properly pronounce the dialogue with an African (Kenyan), Canadian or Indian accent—Fernandes’s own three ethnic backgrounds. Occasionally zooming in uncomfortably close to his mouth, the artist tries, and often fails, to properly articulate the phrases. Pulling his lips apart with his fingers or moving his tongue this way and that, we are privy to the almost comical distortions of ethnic stereotype.

Foe is, at heart, cultural representation; the source text picks up where Robinson Crusoe left off, as Coetzee details Crusoe’s friendship with Friday, a former slave, mute by a dismembered tongue. This particular selection manifests the novel’s post-colonial parable: if language is power, Friday—the subjugated “savage”—has none, and Crusoe speaks both about Friday and for him. Fernandes appropriates representational narratives and binds them to his autobiography, invoking his own associations to historical permutations of power—and in a larger sense, the matriculation of identity into dominant cultural economies.

DAVID EVERITT HOWE: Foe makes a good introduction to some of the key concerns of your practice—the relationship of language to power; identity as an economic construct. So what first struck me about the film is how it seems to invert “identity politics.” As opposed to works by artists like Glenn Ligon or Lorna Simpson, who took very strong positions towards their racial identity, Foe seems particularly marked by a very lack of identification. You may be Kenyan, Canadian and Goan [Indian], yet you are training yourself to adopt certain cultural codes in their absence—the accent, the particular way the head moves while speaking. For you, identity seems unformed, or better, completely matriculated into a late capitalist ideology that, in so many words, “smoothes over” identity difference by adopting and homogenizing it into the dominant global culture.

BRENDAN FERNANDES: With Foe, I’m saying that I’m from all the places that I’ve experienced and have connections to. It’s not about synthesizing one’s self or having a lack of identity—it’s quite the opposite. Society wants people to define identity as one thing, but that’s hard for most people to do. I’m more interested in the idea that identity grows and changes through experiences. This does not dilute but creates a richer and more complex sense of being.

HOWE: That’s an interesting clarification. Maybe it would be better to talk about identity in terms of “expectations of identification.” In Foe you train yourself to act and talk in a way that’s very exaggerated and expected. It’s like that movie Fargo, where the accents are so strong they’re farce. Not everyone from there speaks that way. I’m from the South and I don’t sound like a redneck cooking meth in the mountains. I think you’re pinpointing certain, maybe commercial conceptions of how you should act, speak and associate with your heritage.

In a 2007 work, Authentic POP!, you gave away helium balloons printed with the image of an African mask. This gifting was a retort to the market’s commercial appropriation of African imagery—and you began working with notions of symbolic exchange instead of economic exchange, which is perhaps most embodied by your longstanding interest in Canal Street vendors who sell various kinds of cheap African masks. In fact, your exhibition at Art in General last year was largely addressing this cultural economy. The balloons are perhaps an interesting bypass of the market, although it seems like that’s the only time you worked with gifting.

That said, the idea of the gift is also important to this work. The balloons with the African mask are a commodity that I am giving out for free.  I started the project on Canal Street, the same busy street where African immigrants sell masks to tourists. It is interesting to see signifiers of “Africanism” being sold in New York. It speaks of hybridity, in a way, but more importantly it makes me question the lack of cultural specificity inherent to these objects. The commercial sales of “African” objects as souvenirs can perpetuate the stereotyping of a place while creating global economies that destroy that culture.

HOWE: Systems of language are also very important for you. In one particular project, VooDooYouDooSpeak (2010), you employ the legacy of Dada, an early avant-garde movement that used non-sensical words and performance practices to give voice to the horrors of World War I. Dada was a sort of dis-articulation of language and, consequently, power. Can you tell me more about that project, and how you strategize language in your work?

FERNANDES: VooDooYouDooSpeak is a four-channel animation installed in an architectural structure called “the shack.” It uses African mask animations that pulsate with rhythmic patterns, which are actually Morse code. The flashes of light translate as “until we fearless,” the title of my exhibition at the Art Gallery of Hamilton in Canada. VooDooYouDooSpeak references voodoo and the ways in which we can come to fear a culture we don’t fully understand.

Each mask delivers a soliloquy about language, while making reference to voodoo gods and the notion of them taking over one’s body through a spiritual apparition. The masks’ voice-overs are inspired by Dada poetry but, unlike the spontaneous works of the Dadaists, I write my poems in the form of a pantun-a repetitive poetic structure. Through repetition and chance, I’m hoping that, with these nonsensical sound rants, there is a sense that something can still be understood. You could say I’m more interested in how lexicon becomes altered in slang and Pidgin English, yet can still carry the same meaning. So it’s more about investigating the dilemmas and codes that language creates through ethnicity and subculture.