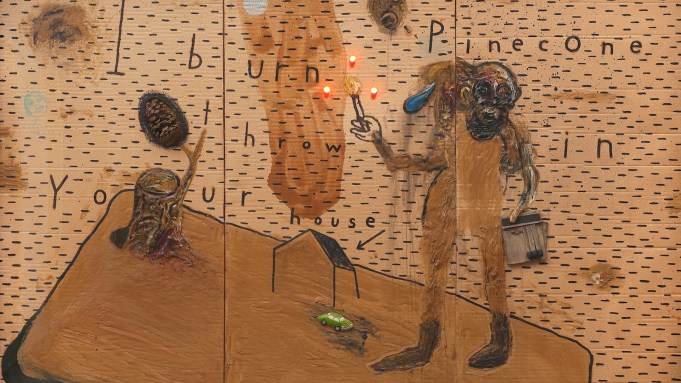 Best known as the Academy Award-nominated director of such films as Blue Velvet and Mulholland Drive, David Lynch is also a prolific painter and printmaker. Nearly 100 of his works make up a retrospective, “The Unified Field,” at the Pennsylvania Academy of the Fine Arts (PAFA) in Philadelphia (Sept. 13, 2014-Jan. 11, 2015), where he trained as a painter and made his first forays into filmmaking during the late 1960s. Like his films, Lynch’s paintings often feature grotesque bodies, violent scenes and images of decay. Large works in paint and mixed mediums on cardboard, such as Pete Goes to his Girlfriend’s House (2009) and I Burn Pinecone and Throw In Your House (2009), showcase the kind of weird domestic intrigue that is at the heart of Lynch’s first major film, Eraserhead (1977). Each of these paintings features a hideous-looking character performing a destructive act, with small lights and other objects affixed to the panel and the title of the work scrawled in child-like letters.

The artist credits the distressed cityscape of Philadelphia, where he spent four years, as a primary influence. Living there during the height of the chaos, neglect and racial animosity that accompanied white flight, Lynch experienced the City of Brotherly Love at its least loving. Although it was filmed in Los Angeles, Eraserhead’s landscape bears a striking resemblance to the acres of deserted warehouses that cover the areas north of Philadelphia’s center—an area that has been dubbed “The Eraserhood” by local artists.

In advance of the show, Lynch spoke to A.i.A. about painting and film, Vedic wisdom, and what inspires his work—as well as what does not, for example, other artists or filmmakers.

EDWARD EPSTEIN Your films read as a series of carefully composed frames, which are each much like individual paintings. In Blue Velvet [1986], the darks and lights on the actors’ flesh are particularly striking. The drama is reminiscent of Caravaggio. Were you influenced by Baroque painting?

DAVID LYNCH No. I’m not an art buff at all. I just wanted to be a painter. And that’s all I wanted to do starting in the ninth grade. I’m not a studier. Even in film, I’m the worst film buff.

EPSTEIN When you were at the PAFA, were there any paintings in the collection there that influenced you?

LYNCH No. I never went up to the gallery. I don’t know what they had up there. I was thrilled at the Academy because of the students primarily—we inspired one another. And there were a couple of great teachers. But, I really only went in to school a couple of times a week and painted where I lived.

EPSTEIN A lot of people experience the destruction in your work as negative. Would you say it’s a positive process?

LYNCH It’s a very positive process. There’s a Vedic expression, “the world is as you are.” It’s the same with cinema, painting, photographs and music. A film has exactly the same frames in every screening, but viewers have their own take—it speaks to Suzy one way and Tom another. And some people see darkness, some humor, some light—and some just walk away.

EPSTEIN The grotesque bodies in both your film and painting—I’m thinking of the film Eraserhead or the painting Pete Goes to His Girlfriend’s House—look like medical oddities. When you were in Philadelphia, did you ever visit the Mütter museum, which has a huge collection of such oddities on display?

LYNCH No, but I have heard of it. I did see many oddities in Philly on the street.

EPSTEIN Can you talk more about that?

LYNCH I lived in Philly from ’65 to ’70, and it was a different place then. When I visited a couple of years ago it seemed much more normal, much more like every other city. One of the things that got added since I was there is graffiti. For me, graffiti has pretty much ruined every city. Every bit of beauty of the patina of coal dust or acid rain—all of these things that age these buildings so beautifully, and made a mood of the city, were completely taken away by cheap aluminum storm windows and graffiti. And for cinema, if there wasn’t graffiti, you could go to places and see them as if you’d gone back in time and you could see the beauty of those old buildings and get the mood.

EPSTEIN Philadelphia’s Mural Arts program just completed a project in which they invited Berlin artist Katharina Grosse to spray paint the wayside of the rail line through Philadelphia.

LYNCH A travesty in my book. Unreal. The walls on railroad lines, they were built so beautifully. They say that style follows function—every detail of how they put one thing together with another: the electric wires, the stonework, the plaster work, the metal of the windows, the railroad signs—all of this stuff is like beautiful sculpture. And as it gets older it just gets richer and more beautiful. They’re sacred things, and you should never deface them.

EPSTEIN On another topic, the female figures in your paintings look pristine and vulnerable—some of them are nude—whereas the males have grotesque faces. It’s similar with the female characters in your films. How do you develop the characters?

LYNCH Each work is its own thing. A woman in a film doesn’t represent all women. Same thing with the paintings. It’s a little world, and there might be a small story in it. I know that there is domestic violence, and all kinds of violence, and these things go into the air, and we all pick up on them.

EPSTEIN So would you say that each piece is an idea unto itself, and the next one is a complete departure?

LYNCH It could be. Sometimes we get on a roll, and the next painting is similar to the one that preceded it. And those things, for me, start getting burned out. And that’s a sadness, especially if I don’t know where it’s going to go from there. So these transitions come up. I’m in a transition with the work right now, and I’m experimenting, and I don’t know where I’m going.