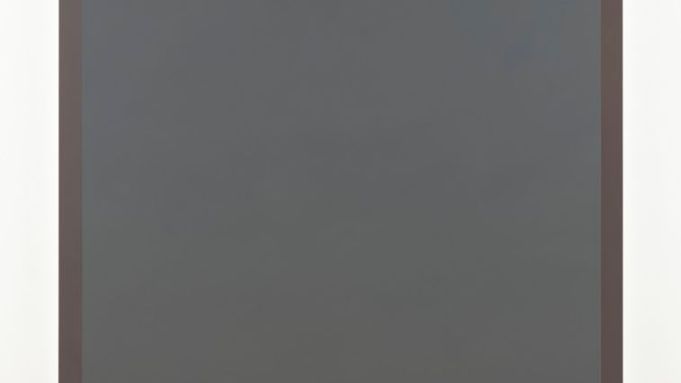 Byron Kim, the painter, often looks at the heavens above his Brooklyn home. For years he has been working on a series he calls his “Sunday Paintings” (begun 2001) in which he writes notes about his quotidian life on depictions of daytime skies. Currently he’s showing a new series of nighttime skies at his new Chelsea gallery, James Cohan. Large, text-free and at first glance monochromatic, they are dark fields of purple or gray bounded on one or more of their edges by painted strips of a darker tone. Looking closer, you see subtle variations of color within the fields. Recalling paintings by midcentury modernists like Rothko and Reinhardt, they feel like pure abstraction, but as always with Kim, have profound ties to the world.

A.i.A. caught up with Kim in the gallery, where his show is on view through Dec. 17.

FAYE HIRSCH  When you make these, do you consider them observational on some level? Or are they purely imaginary?

BYRON KIM  I want them to be analogous to what you experience when you’re  walking around at night in the city. Often you might be alone, but even if you’re with people you’re isolated from everyone just because it’s dark. And there’s just this kind of closeness. You look up at the sky, but it’s never that vast, forever sky.

HIRSCH  Because it’s a city sky?

KIM  Yes. Even if there’s no cloud cover, there’s still reflective light. Otherwise it would be black and we would see stars.

HIRSCH  Yes, the absence of stars is really striking in these.

KIM  If I were trying to be realistic, if I were trying to make the Alex Katz versions of these paintings, there might be one star, or maybe Venus and a star, because when the sky is clear and there’s no moon, you do occasionally see a couple of stars, even in the city. But you can never be sure if they’re satellites or planes.

HIRSCH  As you’re talking I’m struck by the fact that these dark paintings are seen in a bright space, so that, in a funny way, the light that is always there in the city is present as you’re looking at the paintings in a gallery.

KIM  I never thought of it exactly that way but that’s perfect. [laughs]

HIRSCH  You began these when?

KIM  Maybe the winter of 2009. I was painting only the field; there weren’t these borders. I’d have Glenn [Ligon] and Lisa [Segal, the artist and Kim’s wife] into my studio. I trust them to say, “You know, this is just not working. You need to move on and do something else,” or, “This is great! Keep going.” They were both squarely in the middle.

KIM  Of whether I should continue or not. Usually they’re really good about telling me. It’s happened many times.

HIRSCH  Do you listen to them?

KIM  Yeah, 90 percent of the time. This is the one case where I sort of didn’t, because they weren’t very clear.

HIRSCH  So there was something that baffled them?

KIM  After talking to me about what the paintings were about they said, “Okay. We see it, but it took all that explaining and nobody else is going to be this accommodating or generous.”

HIRSCH  But you went ahead anyway?

KIM  I didn’t particularly think they were being generous. Lisa went so far as to say, “These are making you depressed and you need to stop.”

KIM  What was making me depressed was that they weren’t communicating enough. No one likes to spend all their time in their studio making something and then what they’re trying to say doesn’t translate at all. It happens all the time, but no one likes it. For my two closest viewers the paintings were reading somewhat, but not completely.

HIRSCH  So what made you continue?

KIM  Stubbornness. I knew I could do it; I knew I could make these paintings. I thought it was a beautiful subject-so simple. Apparently it was a little harder than I thought to actually convey, but it’s a simple subject matter. I just thought, “There’s some way to solve this.” Then a former student of mine came to the studio. I can’t remember if I came up with the idea of these borders, or he did.

HIRSCH  Are they borders? Frames?

KIM  I tried calling them zips for a while, but that was too art historical.

HIRSCH  I notice that they are only on the sides or the bottoms, but they’re never on the top.

KIM  There’s one painting in my studio where they are on the top, and that’s because I saw a certain thing happening in the sky when I was on Randall’s Island at one [of my daughter] Ella’s soccer practices, and the bridge was overhead.

HIRSCH  I see. But mostly they’re not, so can you explain why you put them on the sides or the bottoms but not on the tops?

KIM  It just feels like it signifies sky more because it’s open on the top. It’s almost a visual-semantic thing, like “North is up.”

KIM  Yeah. Well, saying “Sky’s up” is kind of a convention, because sky is all around. The borders are my own little convention within the idiosyncratic set of circumstances of these paintings, or their rules.

HIRSCH  What are the rules?

KIM  Well the rules came to be that the field would be set against the border. And I would try to stick as closely as possible to what sort of visual phenomena were happening that I could remember and imagine.

HIRSCH  Do you take notes?

KIM  I’ll show you something really absurd. [Takes out his iPhone calendar]

HIRSCH  It just says, at 10 p.m. each day, “Look at the sky.” But then there are notes [reading]: “At Randall’s it’s orange just below the bridge and purple above the city horizon and the bridge is dark, but darker on the left and lighter on the right.” Okay, so you take notes, and that helps you compose the paintings in your studio.

Let’s go back to the rules. I don’t really think of them as rules, actually-I slightly regret presenting it that way. I think while I was painting these paintings I tried to be true to the visual phenomena I perceived or thought I perceived, so I would try not to exaggerate the colors. But the painting on that side of the room that we were in, it’s very violet. After I lived with it for a while, after I thought it was done, it just seemed to be way more violet than most people would think that the sky could ever be, but that seems to happen in the Brooklyn sky at night, when it’s overcast. For some reason, too, I tend to see shadow towards violet; my brain translates it that way. So this whole show is probably skewed towards violet.

HIRSCH  It’s not literal, in other words.

KIM  I’m not privileging something that’s perceptual or imaginary.

HIRSCH  It does seem, though, that you set up a dialectic the minute you put in those stripes. It’s them versus the field.

KIM  That’s pretty much right, except that I often wait a long time to put the stripes in for a variety of reasons. I’m still being really stubborn in thinking that one of these paintings won’t have any stripes-back to the paintings I was first making that I thought were working okay. Also, despite the fact that the stripes, apart from one painting here, are mainly one color-unlike the translucent layered effects in the field-they’re still meant to be like the cornices of the brownstones near where we live. Or-and I didn’t think of this originally, but enough people have said it that I’ll go along with it-looking out a window, maybe.

HIRSCH  One of the things that strikes me is that the stripe serves somehow to put us in a space that is a little more intimate.

KIM  Yes! That’s what I wanted to do with the paintings as a whole, and the stripes enabled me to do that.

HIRSCH  And the paintings are pretty concrete. It’s not like Ad Reinhardt, the painter I actually most think of when I look at this work.

KIM  In Reinhardt’s Black Paintings we’re hard pressed to say whether there is any figure or ground.

HIRSCH  I think they’re oddly romantic in that they send you into this space of complete indeterminacy. Even though they are giving you a grid, you really lose your bearings in those paintings. I do at least.

KIM  Yes, despite the fact that they are so formulaic. It’s my contention that he did that on purpose, despite all his words to the contrary. I also think that he was, on some level, trying to make very romantic paintings.

HIRSCH  Yours seem more diaristic, though maybe it’s because I’m thinking of the Sunday Paintings. Although these are large, there’s something small scale about them.

KIM  It’s interesting that you say that. I want that but I don’t have any confidence that it is actually happening. That’s why . . . I couldn’t think of a title for this series of work, but they’re always “for” something.

HIRSCH  Every painting is called Untitled (for),  and then some initials. One assumes the initials stand for people.

KIM  So far I’ve made about 23 of these paintings, and just two of them are not initialed for people. The one I just finished in my studio is for R.I., for Randall’s Island, which is kind of ridiculous.

HIRSCH  Are they people you know?

KIM  Most of them are, although one of the first two paintings was for “BP,” Blinky Palermo. It’s a painting that doesn’t have a stripe, but I was just on the verge of instituting that.

HIRSCH  So they are mostly people in your life. Of course that’s the assumption when you see a dedication.

KIM  I probably shouldn’t admit this, but that’s a conscious device to make it more intimate.

HIRSCH  When you said that, you gestured, as if bringing the world in a little closer. I think that’s what those borders do as well, so maybe that’s part of what makes them intimate, and not oceanic.

KIM  That’s exactly what I meant. One of the people who wrote for the catalogue, David Hinton, is a poet mostly known for translating ancient Chinese. His little essay is called “Gateway,” and it’s all about the threshold between earth and heaven. So it’s a man-made threshold.

HIRSCH  It does strike me that if you are doing an urban night sky, and you’re putting a strip in it, and you’re saying that it’s for somebody. You’re giving it a kind of social, cultural thrust. It’s not just purely nature.

KIM  That’s sort of built in. It’s essentially about some situation that’s happening in the city so it can’t be purely nature.

The 10 Best Highball Glasses for Your Home Cocktail Bar

SZA Says Her New Album Is ‘All Over The Place,’ But She’s Not Rushing to Release It: ‘I Don’t Have Any Deadlines’