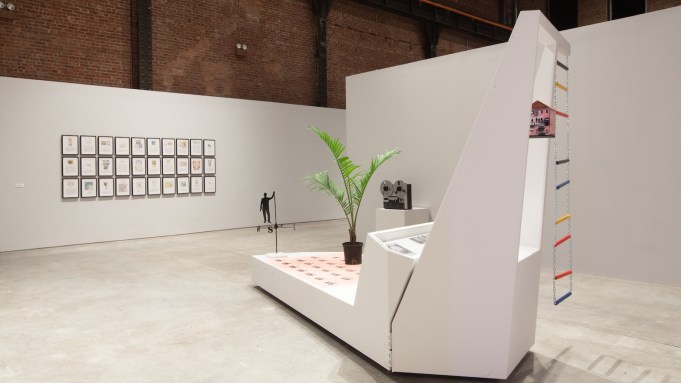 Agnieszka Kurant is chasing phantoms in “Exformation,” on view at Long Island City’s SculptureCenter (through Jan. 27). The Polish-born, New York-based sculptor sought out ghostly, antiquated and unrealized ideas as the basis for the show’s works. Included are maps of and atlas-styled entries of islands observed as mirages by sailors or invented by colonial expeditions to get more funding; a wall-length shelf full of empty tomes with book jackets based on fictional books-within-books; and a number of artworks that had existed only in a passing mention between artists—including Alighiero Boetti and Marcel Broodthaers—and their assistants, family or friends.

The exhibition’s centerpiece is the short film Cutaways (2013). The title refers to characters excised from movies during the editing process. Kurant produced the piece with legendary film editor Walter Murch as part of SculptureCenter’s artist-in-residence program and in conjunction with Stroom den Haag, a Dutch arts center. Taking a discarded character each from Francis Ford Coppola’s The Conversation (1974), Richard Sarafian’s Vanishing Point (1971) and Quentin Tarantino’s Pulp Fiction (1994), Cutaways shows a meeting between the three, shot by Kurant and played by their original actors.

Kurant spoke recently with A.i.A. at SculptureCenter about the show’s title, artists’ estates and Abe Vigoda.

MATTHEW SHEN GOODMAN Can you tell me about exformation as a concept?

AGNIESZKA KURANT It’s the negative of information, but it also constitutes what information is. It’s the idea that what we get as information is usually a compressed version of something that was originally much larger. Things are always edited out—in order for the final message to be clearer, simpler and more readable, or for reasons of censorship or aesthetic reasons. That discarded material is the exformation. With the film, I’m looking at Hollywood cinema production, but the concept can be applied to anything.

SHEN GOODMAN Did you start with film, and then move onto the other areas?

KURANT  I actually made the phantom maps first, but then there were the books, which are all fictional. I wanted them to have an economic identity. They all have ISBN codes and barcodes, and I gave some to local libraries.

I’m going to have some of them written too. Ingo Niermann, the German novelist, is currently writing The Grasshopper Lies Heavy, which is a fictional book in Philip K. Dick’s alternative history novel The Man in the High Castle. Once this book and the other books commissioned are finished, they’re going to be published in the normal economy of publishing.

With the Phantom Estate piece, it started with thinking about how a lot of estates are suspected of fabricating nonexistent works, working from a photograph or a footnote or something. I decided to push it further, and actually interviewed the partners, collaborators and friends of several artists about works that weren’t even footnotes, that didn’t leave any such trace and can’t be sold. I looked for pieces that were rumored, mentioned by the artist in an informal conversation, but without any image or documentation.

SHEN GOODMAN Have you heard from artists’ estates?

SHEN GOODMAN For the film, did you choose to work with Walter Murch because of his relationship to the cutaways? He edited The Conversation, right?

KURANT Yes, he edited The Conversation, but basically I was interested in working with an American film editor, and I felt that he is the best. He thinks about editing as an art form. I’m interested in that, because it reminds me of curating. It’s a proto-curating, deciding what’s in, what’s out.

SHEN GOODMAN What was doing research for the film like?

KURANT Walter put me in touch with a lot of people, including Francis Ford Coppola—who allowed us to use McNaught, the character from The Conversation—as well as Tom Luddy, the co-founder of the Telluride Film Festival, and Peter Becker, the CEO of the Criterion Collection. They all helped me do my research, looking for these cutout characters. It’s not information you find on Wikipedia. It’s mostly hidden; it’s like walking in the dark, because you don’t really know where to look. Sometimes I would contact film directors and just ask, “did you by any chance cut out a character from your film?”

SHEN GOODMAN Is there any reason why you chose these three characters in particular?

KURANT Originally, actually, I collected a very long list of characters, close to 200.

SHEN GOODMAN Is that what scrolls during the end of Cutaways?

KURANT Yes, as part of the credits. I chose these three characters because I was interested in why they were cut out, and how their removal changed the films. For example, the character of McNaught, who is played by Abe Vigoda in The Conversation, was the best friend of Harry Caul. His removal radicalizes Caul, who becomes this sociopathic, antisocial character without McNaught. The hitchhiker, Charlotte Rampling’s character in Vanishing Point, is interesting because when you remove her the film becomes even more male, even though she’s so ghostly already. In the original footage, she kisses Kowalski and then they smoke a joint and fall asleep. The next morning he wakes up and she’s gone, so she’s already a phantom. Pulp Fiction was a bit different, because there’s still a bit of Monster Joe, Dick Miller’s character, in the final film: his daughter Raquel is still in the movie as Harvey Keitel’s character’s girlfriend.

These three characters just fit together. It made sense to involve them in a narrative. Actually, I want to make another episode, possibly something in Europe with European characters. I have so many interesting characters cut out from Fassbinder, Truffaut, Varda.

SHEN GOODMAN Was it difficult to get these actors to sign on?

KURANT They were surprised, but they all liked the idea. Did you know Abe Vigoda is 92 years old?

SHEN GOODMAN I didn’t realize he was still alive until I watched this.

KURANT Exactly! It’s incredible that he made it. He hasn’t really been acting as much, and it was amazing to bring him back for this short moment.