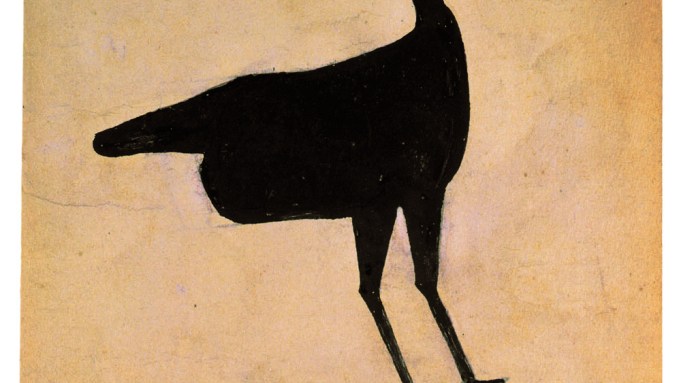 Over 100 of Bill Traylor’s lively, pared-down images are spending the summer at New York’s American Folk Art Museum, spread out over two concurrent shows devoted to his drawings. Traylor (ca. 1854-1949) is an outsider artist who, based on his presence in mainstream art museums like New York’s Metropolitan Museum of Art and Museum of Modern Art, could just as easily evade that sometimes controversial label. Born into slavery on a plantation in Alabama, Traylor moved to Montgomery in 1928, remaining there until his death. The shows, both on view through Sept. 22, are Traylor’s first solo museum exhibitions in New York.

The Traylor shows come at a time when outsider art is experiencing somewhat of a renaissance. Most notably, Massimiliano Gioni’s Venice Biennale exhibition “The Encyclopedic Palace” (through Nov. 24), which includes work by many self-taught artists, has been widely praised since its June opening; moreover, the long-running Outsider Art Fair moved into prime Chelsea digs in February, and will debut in Paris this fall.

Valerie Rousseau, the AFAM’s curator of 20th-century and contemporary art, and chief curator Stacy Hollander—the two co-curated “Traylor in Motion”—accompanied A.i.A. on a walk-through of the shows.

As is the case with many outsider artists, the fact that any of Traylor’s work has survived is thanks to a great deal of luck and the conviction of one particular patron, in this case Charles Shannon (1914-1996), a white American Realist painter interested in African-American life, music and art. Shannon didn’t come across Traylor until a decade after Traylor came to Montgomery, where he worked, briefly, in a shoe factory and as a laborer. At least 1,200 drawings survive, all made between 1939, when Shannon met Traylor, and 1942, when Shannon was drafted into the military. “There’s no evidence of what Traylor did before 1939,” when he was in his mid-80s, Hollander remarked.

Starting in the ’40s, while Traylor was still alive, Shannon began trying to interest the art world in the cache of drawings he’d collected. After initially failing to interest collectors or curators, he divided the 1,200 drawings into distinct categories (people, animals, “exciting events,” etc.) and put together “mini-collections”—groupings made up of one example from each category. In 1982, he gave one complete set of 30 drawings to the Montgomery Museum of Fine Arts. “That turned out to be a banner year for Traylor’s art,” said Hollander. “The High bought another group, and the exhibition ‘Black Folk Art in America’ opened at the Corcoran [in Washington, D.C.]. Traylor emerged a star from that show.”

Twenty-nine of the 30 drawings in the Montgomery group fill one wall of the show, as a sort primer, or overview, of Traylor’s work. The rest of the show focuses on the recurring motifs found in his drawings, for example human forms built with basic geometry (a triangle above a square on top of a trapezoid, for example, in a drawing of a woman in a skirt holding an umbrella). Gesticulation, especially pointing, dominates the drawings, and almost every one conveys a sense of movement or action. “It’s all about discussion and narration, identifying a scene and thinking about what be happening outside the edges of the work. The animals are all connected to each other, like a wave, or a dance,” Rousseau explained, referring to an image of two dogs fighting.

“There’s an awful lot of visual punning,” Hollander observed. She pointed out a human-table hybrid, which Rousseau considers one of Traylor’s most iconic drawings: “A transition between the human figure and architecture is recurrent in a lot of his work.”

When the curators started conceptualizing “Wonders from New York Collections” (unlike the High/Montgomery show, it won’t travel), they were thinking cinematically. “Motion is very important in so many of his compositions, so I wanted to depict Traylor as a [theoretical] filmmaker,” said Rousseau. The works in this show home in on specific stylistic tics that contribute to movement and drama. Traylor has an uncanny ability to depict the body in motion—dancing, falling, fighting, leaning back, hunching over—despite limited materials (found cardboard, poster paint and charcoal) and the works’ overall flatness. Traylor also displays a fascination with accessories; most of his figures wear hats or gloves, and hold purses or canes.

Hollander points out the way that splayed fingers in one drawing echo the prongs of a pitchfork in another, exemplifying a flow between reality and imagination that she reads as integral to understanding Taylor’s work. Many figures grip raised sticks or batons, as if they are conducting an event happening outside of the frame, imbuing Traylor’s figures with a sense of directorial authority.

“When you think about Traylor sitting and watching the world go by,” said Hollander, “it’s like a movie—a constant stream of action all day long.”