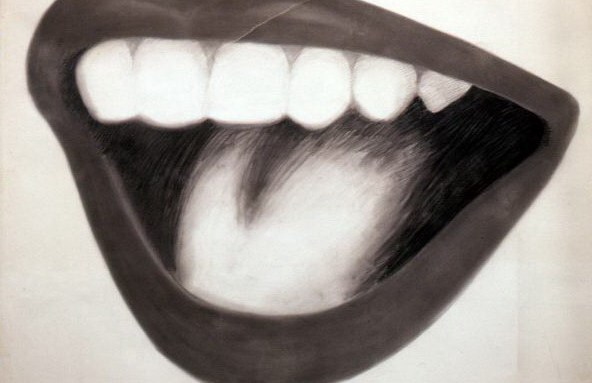 For the first time, the drawings of artist Tom Wesselmann (1931–2004), which approach two-dimensional depiction as both an aesthetic endpoint and conceptual premise, have been assembled in a comprehensive exhibition, now on view at New York’s Haunch of Venison. Curated in 2003 by both Wesselmann and his wife Claire, who envisioned the show in a museum setting, “Draws” features work that spans not just the breadth of the artist’s career, but also the theoretical boundaries he pushed from the position of drawing. Later Wesselmann works include “drawings” in the form of laser-cut steel and three-dimensional hand-cut paper sculpture.

The show also includes work from the artist’s best known series, “Great American Nude.” Many of those works feature Claire in the role of model-a role wherein the viewer can witness her identity morph seamlessly between model, muse, wife, fellow artist and creative co-conspirator. In each nude Claire posed for, she is rendered wonderfully alive. Her nudity becomes an embodiment of shameless vitality, exalted humanity, and matches her inexhaustible passion for her husband’s work. In person, Claire Wesselmann is as alive as in Wesselmann’s drawings, with a keen intellect and a uniquely personal take on her husband’s practice:

AIMEE WALLESTON: The retrospective at Haunch of Venison is the largest compilation of Wesselmann’s drawings ever shown. How did this come about, and how far back do the works span? LEFT: DRAWING FOR GREAT AMERICAN NUDES #20, COURTESY HAUNCH OF VENISON

CLAIRE WESSELMANN: Tom and I selected the drawings in 2003. We anticipated doing the show in a museum, but when my dealer joined Haunch of Venison, it did seem ideal. The show is scheduled to travel to other museums, where it may change from venue to venue. Tom and I graduated from Cooper Union in 1959, and these drawings are from then until 2004, which is the year Tom died.

WALLESTON: Before attending Cooper Union, your husband served in the army, during which time he drew a lot of cartoons. Was that the beginning of his art-making?

WESSELMANN: The cartooning was simply army humor, I think, in the beginning. He did it to keep himself sane. He didn’t get sent overseas, which he was grateful about. But he did come to New York to become a cartoonist, which was obviously not the case in the end. When he came to New York to go to Cooper Union, he was redirected toward art, as he was introduced to Abstract Expressionism and all of that.

WALLESTON: And before he went into the army, that he got a degree in psychology. Did you ever talk about how that related to his artistic practice?

WESSELMANN: No, I never did. I wasn’t there at the time.

WALLESTON: But once he got to New York, he became fairly firmly entrenched in the art world. Despite his relationships and strong ties with other artists, however, it seems that Wesselmann was very centered on his individual practice. He and his peers weren’t replicating a New York School type clique—he was very much on his own.

WESSELMANN: That’s very true. None of the Pop artists were really included in each other’s practices. Tom was grouped with the Pop artists only after he began to have his work shown. I remember we went to a seminar in Ohio, not far from where he grew up, where Lawrence Alloway was the moderator. It was Alloway who came up with the term “Pop Art.” People began to see things and identify this work as a movement. Later, Tom spent a good portion of his career trying to get rid of that title, only because it has been seen in terms of being a movement, and it was not a movement.

WALLESTON: And his work had ties to so many other time periods and genres. There are influences of de Kooning in Wesselmann’s work, his “Great American Nude” series directly reflects de Kooning’s “Women,” though the reasons behind the creation of the works seem very different. I see the biggest departure in the fact that de Kooning could be blunt about women. There is, at times, a lack of joy and a certain cynicism in his “Women.” Wesselmann’s depiction of women, in contrast, never seems at all cynical; he seems want to delight in women, and to make women look appealing.

WESSELMANN: In his own words, he would say, “I’m not just some old geezer drawing nudes.” He was drawing me, and I was his wife and his friend, and he said he cared very much about that.

WALLESTON: Do you remember how that process came about, that he came to draw you?

WESSELMANN: First of all, it was at Cooper. And, then, you know he drew all the time. If he wanted to explain something to you, he drew it.

WALLESTON: And when you began posing for your husband, did you see that as a collaboration?

WESSELMANN: Well, because I painted too, it was secondhand knowledge to me. I knew exactly what this was about. I felt like I was just doing what I was supposed to be doing. He needed a model, he asked me to model. It wasn’t like the standard model from drawing class. If you’re just a model—and I don’t mean to denigrate that at all—but if you’re somebody who has done some artwork, you understand the dialogue. And if it’s somebody you care about, it adds another dimension. But sometimes the sitter wasn’t someone Tom had a personal relationship with. Sometimes it was someone he was just fascinated with… their eyes or their look, and he wanted to get it down on paper, because it intrigued him.

WALLESTON: And he drew you off and on for the duration of his career. Do you have an idealized Wesselmann artistic period, a time when he was doing something that stands out as your personal favorite?

WESSELMANN: Not really, because I was present the whole time, so I saw how each thing led into the next. I love each period for what it resonated. The early little collages (1959–1962) are quite beautiful. I would watch him pick up scraps of paper in the street and add to them to his compositions. STUDY FOR BIG MOUTH, COURTESY HAUNCH OF VENISON

WALLESTON: And to go into Wesselmann’s starting point for his major series, “The Great American Nude”… I’ve heard that the series started with a dream he had about the colors red, white and blue—is that right?

WESSELMANN: Yes, and then he added both gold for the stars and khaki to represent the army.

WALLESTON: And why do you think Tom wanted to explore aesthetic signifiers of America in his work?

WESSSELMANN: I’m fond of saying that Tom is an Ohio boy. There is something very specific I mean about that, having met more than some Ohio boys in New York. I can remember being at parties and talking to someone who would claim to be from some exotic place, and then, when I would ask if they were born there. They would say, “No, I was born in Ohio.” It’s crazy, but there were many. Jim Dine was from Ohio, and there were a lot of guys during that time period that came from that part of the country. They brought with them experiences from their past, partly conservative, but also more expansive than city living. More wide open spaces. More experiences with woods. Tom was a pretty straightforward guy, and that is part of the work.

DRAWS IS ON VIEW THROUGH JANUARY 2. HAUNCH OF VENISON IS LOCATED AT 1230 SIXTH AVENUE, NEW YORK