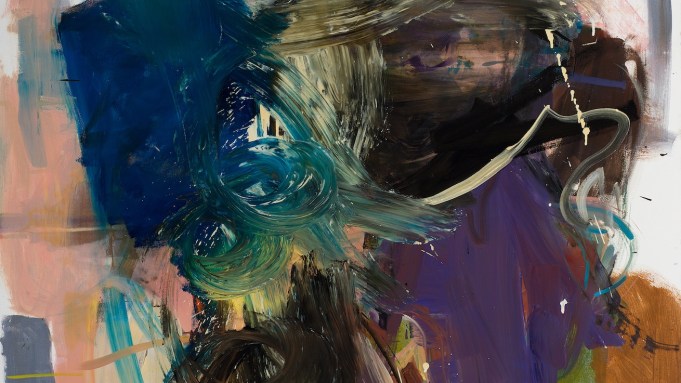 German painter Anke Weyer’s new abstract canvases and drawings, now on view in New York, mark a departure. While her earlier, expressionistic abstractions alluded to landscape, her recent paintings reference the body, both in scale and in their mostly vertical compositions, as well as occasional hints at imagery. In “Du,” her fifth solo outing at Canada gallery (through Jan. 26), the canvas Blue Lighter (2013), for example, features the suggestion of the head of a skeleton that extends what might be a bloody fist toward the canvas.

Born in Karlsruhe, the 39-year-old artist attended Frankfurt’s Städelschule, where she studied under Per Kirkeby, and then spent half a year at New York’s Cooper Union as an exchange student. She has stayed in New York ever since, and now lives and works in Brooklyn. While her works are still priced modestly, in the $10,000 range, they are gaining attention; Susan and Michael Hort told A.i.A. that they snatched up a large canvas at last month’s NADA art fair in Miami.

On a cold Christmas Day, Weyer spoke with A.i.A. at Brooklyn’s Owl Farm Bar, near her Gowanus studio, about her approaches to painting and drawing, her studio process and the experience of coming from Germany to the United States.

NOAH DILLON I’m curious about the relationship between abstraction and representation in your new paintings. The imagery and size of your earlier work referred more to landscape and place. How do the body and representation fit into what you’re thinking about in these paintings?

ANKE WEYER The comparison to earlier paintings is a good starting point because they’re more like fields or landscapes—there’s a lot of air in them. I looked at them as a picture. Now it’s not so much about whether I paint a figure or a landscape; what matters is how the whole works as a body.

DILLON So what’s that process like in the studio?

WEYER A lot of paintings get edited out. The warming up process is slow until I can let things happen from a different judgment. It’s unplanned and suddenly it’s actually beautiful. It feels as though I’m pushing, scratching through the painting. Painting comes burdened with all these problems, like scale, history and materials. I try to use problems and leave them as open as possible on the canvas. I often want to cover things up because they seem like mistakes when it’s actually a matter of what you allow.

DILLON How do the figurative drawings function in that regard?

WEYER These drawings, in comparison to painting, are easy, uncomplicated. I use ink, which is immediately, permanently there. I make a lot of drawings, trying to work quickly without composing anything. And the shapes, brush strokes and proportions are formally similar to the paintings.

DILLON There’s another explicit reference to being, to people, in the show’s title, “Du,” which means “you” in German. What kind of relationship does that refer to?

WEYER It’s pretty ambiguous. I think paintings tend to act like a wall or a mirror, bouncing back at you. Du speaks to that. In German, Du is one of two forms of address: the informal, personal version of talking to someone. You look at the painting and see yourself or I can see myself, or it’s its own entity. I like that it’s not talking about me, but is like serving or service to somebody.

DILLON There are places in these works where, as a viewer, apprehending the surface can be very rapid; in other places it takes a very long time to digest the image.

WEYER They’re highly personal and revealing. They demand that people stand there for a while and deal with it. That’s hard and makes me nervous, but I think it’s important to be personal and honest and just lay it out there.

DILLON Can you talk a little bit about your education, how you came to New York and to painting?

WEYER The school in Frankfurt was good because it wasn’t self-evident that painting was something you could just do. I tried a lot to get away from what painting involved and to physically destroy the painting. It took me forever to actually paint with a brush on a canvas. When I was in Frankfurt I had major crises about standing there, painting on a canvas like it’s a totally natural thing. Doubt is important and I think that really helped me.

Now that struggle happens within the paintings. They interest me most when I can deal with all that in the work without walking away from it. I feel like in the shift from German to English I now have a little of both, but neither properly. So that leaves me with painting as a language.