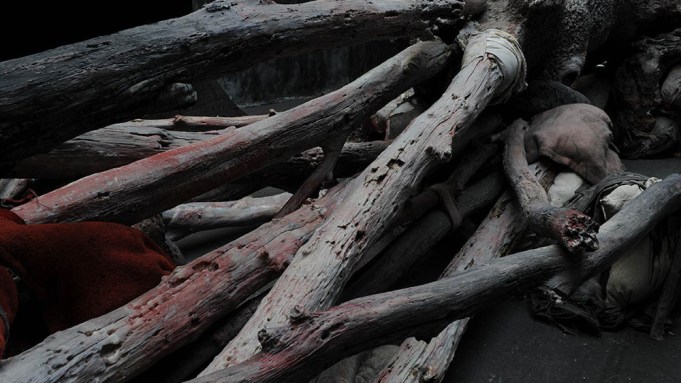 “Cripplewood is not dead wood,” writes J.M. Coetzee in the text for the book accompanying Berlinde De Bruyckere’s installation Cripplewood-Kreupelhout at the 55th Venice Biennale (through Nov. 24). “Cripplewood . . . is alive. Like all trees, the cripplewood tree aspires toward the sun, but something in its genes, some bad inheritance, some poison, twists its bones.” In her installation, De Bruyckere, based in Ghent, has re-created a fallen tree in a fleshlike encaustic veined with red, as if animated by blood. Placed within the hushed, darkened space, illuminated by a skylight covered in tattered fabric, and itself tied up and patched in places with cloth resembling bandages, the tree resembles a wounded being slowly recovering its vitality.

In fact, the South African writer and the Belgian artist (b. 1964), who has had numerous solo exhibitions in Europe since the 1980s but very few in the States, cooperated in the project. Having long admired his novels, and feeling a profound affinity with their themes, De Bruyckere invited Coetzee to be the curator for her Biennale project. Their moving correspondence, ranging in subject from cripplewood to St. Sebastian (patron saint of plague victims and a constant character in Venetian painting) and Bernini’s Apollo and Daphne (in which the nymph is shown transforming into a tree), is included in the book, along with a newly published story by Coetzee, “The Old Woman and the Cats.” While the connections are not direct, there are similarities between De Bruyckere’s fragile yet powerful tree and the old woman in Coetzee’s tale, whose son arrives at her home in rural Spain to find her confronting mortality in ways that are inscrutable to him.

De Bruyckere met with A.i.A. inside the Belgian pavilion during the opening days of the Biennale and discussed trees, her relationship with Coetzee and the value of talking about art that doesn’t yet exist.

FAYE HIRSCH This is something of a departure for you.

BERLINDE DE BRUYCKERE It’s a change in that I’ve never done such a big sculpture before. But all the topics I have addressed in my previous work are in this one.

HIRSCH Tell us about this work.

DE BRUYCKERE You enter the space and see an enormous tree. I’ve worked with trees before, but on a much smaller scale, and always in vitrines. I bought old vitrines and used the same encaustic technique. I start from the dead tree and make a mold. We begin with that negative, a silicone mold, and in that we paint the encaustic in many layers, with epoxy and iron at the center to make it stronger. Only when you take the wax out of the mold can you see the resulting surface. Then you put all the parts together.

HIRSCH Do you pigment the wax?

DE BRUYCKERE Yes, and then paint it layer after layer—as many as 20 layers altogether.

HIRSCH The pink here and there gives it the feeling of flesh.

DE BRUYKERE Yes. I use the same palette here as in the human bodies. So it looks really human. That is a subject of much of my other work, and in fact you can look at the tree as a huge, wounded body. It’s as if it needs to be taken care of—as if nurses came by and bandaged it.

HIRSCH Did you search around for this tree?

DE BRUYCKERE I fell in love with this tree when I spotted it for the first time two years ago. It was lying in a field in France, and it was so strong. I just saw it from afar at first, and was not able to get close to it, but on a walk I figured out how to come closer and thought, “Wow, it’s a sculpture on its own.”

HIRSCH It was waiting for you.

HIRSCH Is it all one tree?

DE BRUYCKERE No, just the trunk. The branches were made from other trees that I found in my neighborhood in Ghent. The installation in Venice took place over time. We began in January, building the walls and the floor, then we brought the big tree in three parts and the roots in three parts, and placed them in the space. The door was not wide enough otherwise. And that was the most important decision—how to place the big tree in the space, because we would not be able to move it after that. Then we brought some branches just to feel how far we could go. We made the decisions one by one, here.

HIRSCH Were you seeking the quality of a mausoleum? Because the pavilion feels like one.

DE BRUYCKERE I think it’s nice that it feels like this, because it makes the piece feel more fragile. On the other hand, a mausoleum is about death. Today there is no sun, but normally the light from above caresses the tree and it gives the body new life.

HIRSCH The fabric on the skylight is distressed.

DE BRUYCKERE Yes—we destroyed the fabric to give it many holes, which are very important, because when there is light it’s as if there are stars. The fabric was to be similar to textiles that have been destroyed over hundreds of years because of being exposed to too much light.

HIRSCH So in your concept, time has already passed.

HIRSCH Could you speak a bit about your relationship with J.M. Coetzee? Did you know him before this project?

DE BUYCKERE I knew him before, ever since I worked on another project with him. That was my first experience with someone who gives me so much energy and power, and so many ideas. It felt natural to ask him to be the curator, because I believe a curator should feed you, not just talk about the work. This work did not exist until I installed it here—it was only a prediction. There was nothing to see. It was useless to bring Coetzee to Belgium, because only part of the piece was in my studio, and part here. The most important thing was for me to write him to talk about the work in words, not images. I forced myself to use words to explore the content of this work. It was very beautiful the way it happened. I had never done it like that before. Normally as an artist you begin by working in the studio, and only at the end do you talk about it—in the museum, in press releases and so on. This time I had to translate it before it even existed.

HIRSCH Was that helpful to you?

HIRSCH So you had read all his books. That sense of a humanity that’s just holding on—that’s something that you share.

DE BRUYCKERE I like very much the way that he deals with human beings. The personages and characters in his books, they are always very fragile. I like very much his descriptions of the characters. It’s like he’s taking you by the hand and leading you somewhere. At one moment you see the beautiful side of this person, and at the next he is showing you the animal side. It’s very familiar. We all have the beast in ourselves; we only have to control it.

Berlinde De Bruyckere’s Kreupelhout-Cripplewood is at the Belgain Pavilion in the Giardini, at the 55th Venice Biennale. The curator is J.M. Coetzee, the deputy curator Philippe Van Cauteren and the commissioner Joke Schauvliege, Flemish Minister for Environment, Nature and Culture.

Restaurateur Richard Sandoval Is Opening a Tulum-Inspired Eatery in NYC