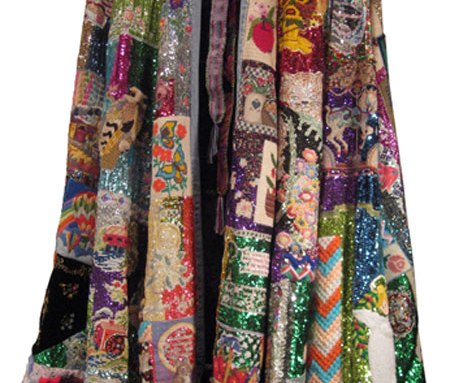 Larry Krone’s devotion to the art and craft of Americana, from etched shot glasses and intricate beadwork to Dolly Parton song lyrics spelled out in hair, has remained constant for over 20 years. His love of all things Country & Western has even led in recent years to a successful career as a singer/songwriter in addition to work in costume design under the label House of Larréon.

The St. Louis-raised, New York-based artist’s latest exhibition, “Together Again,” at Brooklyn’s Pierogi (through Jan. 5 by appointment) features 10 years’ worth of such craft-based work, including reverse glass paintings; abstract wall sculptures sewn from crocheted potholders and granny squares; hay bales made out of latch-hook rugs; and a large patchwork cape covered in sequins.

The urban cowboy talked with A.i.A. about these labor-intensive creations as well as an upcoming show at New York performance venue Joe’s Pub (Jan. 5) during a recent visit to the gallery.

JANE HARRIS Your exhibition has a cozy, homey feeling, like the viewer had stumbled upon a honky-tonk in the middle of Brooklyn. How deliberate was this ambience?

LARRY KRONE That atmosphere seems to just follow me around. I start an installation with the intention of creating an austere, tasteful display, and somehow there always ends up being Jack Daniel’s bottles everywhere. I’d been living with this work in my apartment for so long that the line between my art and the crazy clutter surrounding it began to blur. I was anxious to get the work out of my home and give it the museum treatment, but it became clear as I planned the show that the pieces would benefit from the context of me and my world of collections, country music and booze. Someday I do want to see that museum treatment, though!

HARRIS Well, I imagine they reflect your stage life too. You’ve become a country musician first and foremost these days, wouldn’t you say, as well as a costume designer?

KRONE It’s true that I am much more comfortable in the music/theater/dance world than in the art world these days, but my heart is really in my visual art. That and songwriting are where I work out my ideas and feel the most satisfaction when it comes to process and expressing myself. My performance work is a part of that, too. I’ve always thought of performance as the most direct way to talk about my own identity in terms of masculinity, a consistent theme running through my work since I started making art.

Now, House of Larréon—the accent is silent—is something I am still figuring out. I am having a ball with it-I’ve been costuming dance and performance pieces for people like Neal Medlyn, Adrienne Truscott, Bridget Everett and Kathleen Hanna. Besides being challenging and fun, figuring out how to dress these incredibly talented and powerful women has forced me to consider some formal issues about the body and what clothes really do to create or at least project identity.

HARRIS The centerpiece of your show is a magnificent cape made of hundreds of embroidered swatches that you found and sewed together, sequinning empty spaces to create a giant tapestry. How do you decide when something like that is done, and do you consider it a costume or a sculpture?

KRONE I consider the cape more of an object than a functioning article of clothing. It’s tough as a sculpture, though, because you can’t really see all of it when it’s on display. When it hangs, yards of detailed work get lost in the folds. Also the lining is really elaborate and beautiful, but most people don’t get to see it. A part of me does think that’s cool—to have much more there than you can actually see. Someday I’d like to photograph all of the details of the cape and make an accompanying book of the photographs, so you can have it both ways.

HARRIS What can people expect from your upcoming show at Joe’s Pub?

KRONE It’s going to be great. I’m so proud of all of my new songs. I’ve been performing them a little bit here and there in small venues, but this show is my chance to bring them to life with bigger arrangements. The core of the act is the same as it’s always been, though: sad country songs, me playing the ukulele using the most rudimentary skills possible, and constant onstage costume changes. And I’ll probably cry at some point.

Kanye West Previewed New Songs With James Blake in London, Who Knows if We’ll Ever Hear Them