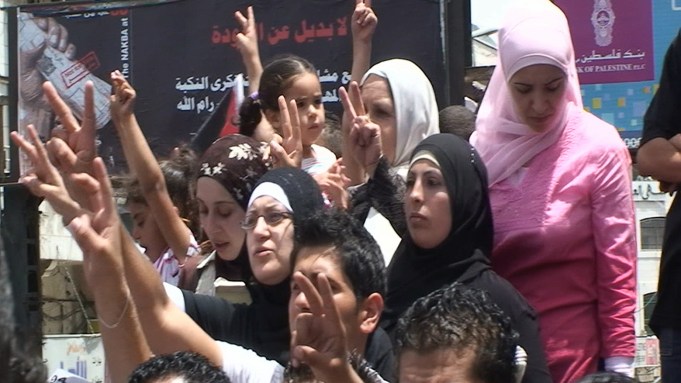 A group of naked men and women play a game of tag in a former Nazi gas chamber; a choir of deaf-mute youths “sing” a Bach cantata in a church; a unit of nude Polish army guards practices a military drill in a ballet studio. Warsaw-based artist Artur Å»mijewski (b. 1966) uses film, video, and photography to present staged “social experiments” he has devised—ranging in theme from the politicized (social difference and exclusion) to the psychosocial (collective behavior, conflict management, and human vulnerability).

Early works like Out for a Walk (2001) and Karolina (2002) explore disability and illness, disclosing how the sick and handicapped are positioned as “the other” in society. Å»mijewski’s unflinching lens catches uncomfortable images: an able-bodied man assists a fully paralyzed man to walk, while a young woman, bedridden by advanced osteoporosis, tries to end her own life. Because his subjects are complicit, even active participants in his representations, the artist puns on voyeurism but ultimately acknowledges the others’ agency and offers them a rarely afforded opportunity for self-expression.

Å»mijewski’s most common strategy is a simple one: He assumes the pseudo-scientific role of the social researcher, arranges an unusual situation, and uses real people as guinea pigs to observe how they behave in an art context that never quite feels like a placebo. Absolute anthropological distance is never achieved, nor is it at any point the particular goal; the artist frequently inserts his presence. In fact, Å»mijewski affirms an explicitly political approach to art making. “Art is a hard fight for human consciousness,” he has said. He is a member of the left wing Polish political movement, Krytyka Polityczna (“The Political Critique”), and the artistic director of their eponymous magazine.

In several recent works, Å»mijewski observes interactions among larger groups of people from a range of  backgrounds in order to expose the mechanisms of social conflict, and to reveal how social difference is cultivated by hegemonic powers to maintain dominance. In 2007, he presented Them at Documenta 12, a film depicting a social experiment involving members of different Polish groups (Socialist activists, Nationalist Polish youth, devout Catholics, and Jewish youth) asked to express their beliefs visually. Occupying communal spaces while executing the work, each group collectively created a mural representing and promoting its collective demographic. The film records the gradual breakdown that occurs as each meeting devolves into verbal and visual violence. Some groups paint over others, and eventually burn the other murals.

His most recent work, Democracies (2009), is a series of over 20 short documentaries, played concurrently in continuous loops, about political protests and group gatherings in several countries, including a protest against the Israeli occupation in the West Bank, a reenactment of the Warsaw Uprising, a Women’s Day Demonstration, a Loyalist parade in Belfast, a Labor Day Riot in Berlin, and a crowd of German soccer fans.

This October, Å»mijewski’s second solo U.S. exhibition is part of MoMA’s ongoing Projects Series, curated by Connie Butler. For this venue he is creating a new as-yet untitled film that re-stages another historical social project; here it’s a Polish government initiative dating from the mid-60s to mid-70s that paired steel factory workers with contemporary artists to produce public sculptures presented to the community through a series of local biennial exhibitions. The new film restages this project over ten days, bringing together
contemporary Polish artists with workers in a steel factory in the Polish town of Swiecie. The original project aimed to dissolve divisions between the working and privileged classes. Recreating this workshop and documenting its unpredictable results, Å»mijewski revisits his nation’s communist past, one that haunts its residents, to explore the ideology of utopia—and the notion of equality lost when ideology becomes itself utopian.

The looped film will be projected in the Project space at MoMA from October 28–February 1.